Welcome to the September 24th edition of Three Things Thursday. I send these weekly messages to keep you up-to-date on the Three Things the Michigan LCV team — and our broader Conservation Voters Movement — has accomplished and/or experienced recently in our work to protect Michigan’s incredible natural resources and the health and well-being of our children and communities.

It has been a challenging few days since last I wrote. So many of us are balancing a complex mix of emotions surrounding the death of Supreme Court Justice Ruth Bader Ginsburg.  She was a remarkable woman with a life story well worth understanding and a body of work that has had a powerful impact on all of our life experiences over the last 25+ years*.  Like many of you, I have been mourning Justice Ginsburg everyday knowing that the simultaneous steps of organizing are exactly what that whip-smart, deeply dedicated and enormously under-stated Brooklyn native would have wanted.

Justice Ginsburg’s casket, which arrived at the US Supreme Court yesterday accompanied by a legion of her former clerks, lay in repose today. Tomorrow, she will become the first woman to lie in state in the US Capitol.   May you rest in peace and in power, RBG.

The Michigan Healthy Climate Plan outlines specific goals that will reduce emissions and protect our public health and natural resources. The Plan is headlined by several bold initiatives:

The announcement of the Michigan Healthy Climate Plan came at a truly critical time as we continue to see the disastrous impacts of climate change play out across Michigan and the United States, from dam collapses and hurricanes to massive, unprecedented “climate fires” (as WA Governor Jay Inslee calls them).   Since taking office, Governor Whitmer has made addressing climate change in Michigan is a top priority. The Michigan Healthy Climate plan takes her commitment to an entirely new level, clearly illustrating the deep connections between climate action, job creation and the protection of people and planet.

Earlier this week, Michigan LCV released a statement on climate change, calling for increased action and accountability from our elected officials.  We are incredibly grateful to Governor Whitmer for heeding our call.

You can read more about the Michigan Healthy Climate Plan on our website. You can also thank Governor Whitmer for her hard work in tackling climate change here!

Our team had a busy week in addition to all of our elections work and amplifying the governor’s major climate announcement. Staff members from every part of our organization were invited to participate in a variety of different speaking engagements. Here’s a snapshot of our team in action:

It is National Voter Registration Week and the Michigan LCV team has been working hard to elevate the importance of voter registration, poll worker recruitment, and early voting. On Tuesday, September 22nd, our team participated in the National Voter Registration Couch Party in partnership with Democracy For All, a national League of Conservation Voters Education Fund initiative. The virtual event was modeled after the couch parties we pioneered right here in Michigan and held throughout the Summer with live music and DJs. We were proud to have Olivia Bradley, our Civic Engagement Manager, step up as the spokesperson for the great state  of Michigan!

What made this event especially fun was a friendly competition to see which LCV affiliates in the East Coast, Midwest, and South/Southwest regions could get the most people registered to vote during the hour-and-a-half couch party timeframe.

To learn more about voting resources and to get help in making your personal voting plan, I invite you to visit our Civic Engagement website.

2. Foundation-hosted event on how organizations quickly pivoted during COVID to reach their constituencies

On Wednesday, September 23rd, our Partnerships Manager Joané Booth represented Michigan LCV Education Fund on a panel presentation for an array of foundation funders in the Chicago area. Joané focused on Michigan LCV’s nimble, innovative and cross-sectional work as we pivoted from our pre-COVID-19 voter/member education and mobilization plans to an all virtual environment. 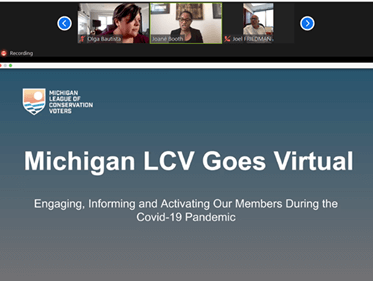 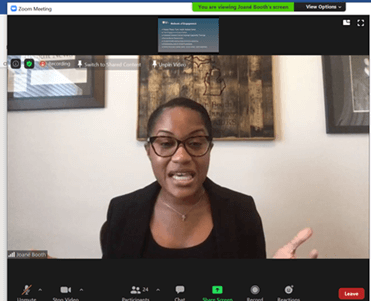 In March, staff from our Governmental Affairs, Communications, Development, Operations, Civic Engagement and Political & Outreach teams quickly caucused, coming up with fun, engaging ways to meet people where they were/are (at home in front of their devices!), allowing us to reach and engage a variety of different communities during this incredibly challenging time.  (If you haven’t seen our short, powerful video encapsulating our work, it’s a must! You can check it out here.)

Today, Rhonda Saxton, our Macomb County Civic Engagement Regional Coordinator, spoke at a press conference with our Michiganvoting.org coalition partners, including the ACLU of Michigan and Secretary of State Jocelyn Benson, to kick off a “40 Days of Early Voting Campaign.” The event took place at the ACLU’s headquarters in Midtown, Detroit, and Rhonda did a fantastic job representing Michigan LCV and spreading the word about early voting, making a voting plan, and signing up to be a poll worker. 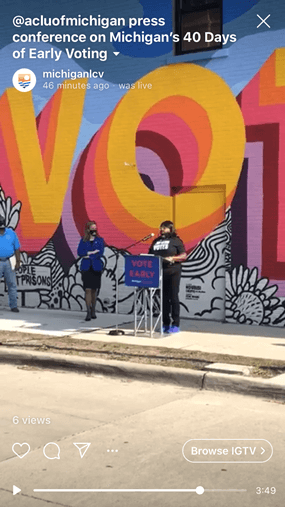 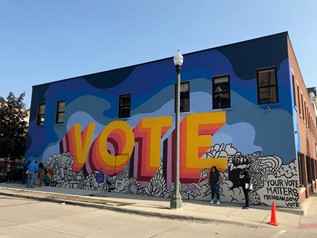 On Monday, I participated in a panel discussion hosted by the University of Michigan’s Osher Lifelong Learning Institute on citizen activism and a healthy democracy. I was honored to be joined by Roddy Wares from the League of Women Voters and Branden Snyder from Detroit Action. There were over 200 attendees, which was amazing, and Karen Bantel did an excellent job moderating the discussion filled with solid, informed questions.

Below is a Bob Allison (our Deputy Director) update from the campaign trail, illustrating how #OurWaterOurVote continues to break through the clutter of this busy election season.

The powerful message of #OurWaterOurVote has been on full display in key Michigan congressional races over the past 7 months — driven by millions in direct spending already by the LCV family of organizations.

This is the fourth TV ad in 2020 on toxic PFAS contamination, and the second LCV TV spot done in CD-8, including this ad from February that promoted Rep. Slotkin’s work on the PFAS Action Act.

LCV also ran statewide TV, cable and satellite ads for two weeks on behalf of U.S. Sen. Gary Peters, “Diagnosed,” earlier in May that featured a leader in Need Our Water (NOW) Oscoda and a Michigan LCV partner, Cathy Wusterbarth.

The Peters campaign, itself, then ran a TV ad recently, “Eliminate PFAS Contamination,” that featured the story of another Michigan LCV partner and West Michigan PFAS activist, Sandy Wynn-Stelt — talking about her family’s struggle with toxic contamination.

This kind of visibility of the #OurWaterOurVote message is building momentum for candidates who are talking about protecting our drinking water, our public health and our children’s futures.

Our national LCV partners, with strong strategic guidance from the Michigan LCV team, have coupled this sizable investment in congressional races, with:

We are actively pushing all our endorsed candidates to make this issue a priority on the campaign trail and ride the Clean Water Wave we’re building.

Next week, we will provide a deeper look at similar work we are doing related to state House, Michigan Supreme Court and county commission candidates.

Thanks for all you do to make our work possible. It’s more essential than ever.

In addition to her commitment to equality and equal rights for all, Justice Ginsburg had a strong and enduring environmental legacy. This Politico article does a great job detailing those accomplishments, among those here are some big ones that stand out: