Welcome to the October 28, 2021 edition of Three Things Thursday! With November 2nd right around the corner, the Michigan LCV family of organizations has been working diligently on a number of election-related priorities while balancing a full slate of other democracy and environmental issues percolating in Michigan.

This week’s issue of Three Things provides a look at Michigan’s redistricting process as the latest round of public hearings conclude, a recap of last week’s Traverse City PFAS town hall (and other critical PFAS news), and another dive into Michigan LCV and Michigan LCV Education Fund’s election-related work ahead of November 2nd.

Before I turn to the Three Things, though, I need to provide you with a quick update on what’s happening in D.C. around the Biden Build Back Better Act.  Per a White House statement this morning…

After hearing input from all sides and negotiating in good faith with Senators Manchin and Sinema, Congressional Leadership, and a broad swath of Members of Congress, President Biden is announcing a framework for the Build Back Better Act. President Biden is confident this is a framework that can pass both houses of Congress, and he looks forward to signing it into law. He calls on Congress to take up this historic bill – in addition to the Bipartisan Infrastructure Investment and Jobs Act – as quickly as possible.”

Our partners at national LCV responded immediately with a statement that included:

It’s a historic day for people and the planet. Once passed, this framework for the Build Back Better Act will be the strongest action the United States has ever taken to combat the climate crisis……All year we have been on the ground in states across the country, on the airwaves, and in the halls of government in our biggest campaign ever. Getting to this point is a testament to the diverse coalition, including labor, environmental justice advocates, and young people, relentlessly fighting for climate action, environmental justice, and good paying jobs. Right now is the time to finalize this transformational bill and get it done. Paired with bold executive and state actions, the Build Back Better Act will ensure the U.S. equitably meets its climate goals by 2030.” ~ LCV President & CEO Gene Karpinski

Please know that there are a number of things still in play.  Some very important pieces of the puzzle are not currently funded in this latest plan. While we are cautiously optimistic that the end result will be a holistic victory, there is still work to be done. It’s time for the final push and the Michigan LCV team is all-in in getting this done!

1. Michigan’s redistricting process & our Democracy For All team’s recent work

The Michigan Independent Citizens Redistricting Commission (MICRC) concluded its latest round of public hearings on Tuesday. The hearings allowed Michiganders another opportunity to provide the commissioners with input and feedback — in-person or virtually– on how to adjust the ten draft proposed maps that were voted on and released two weeks ago.

Michigan LCV teammates — particularly those from our Democracy For All, Government Affairs, and Advocacy & Outreach teams — have been extremely involved, raising awareness about the Commission’s proceedings, providing resources and information to those interested in testifying, and even testifying before the Commission themselves. 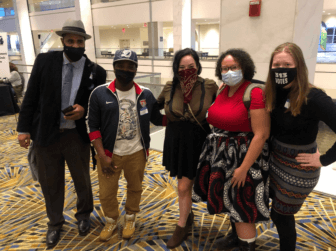 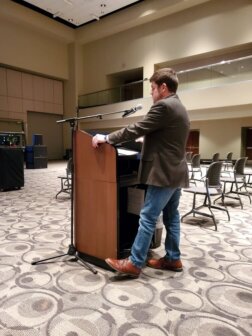 This last round of hearings were the final critical opportunity for public comment and feedback as the Commission now heads into deliberations and final approval on the maps.

To ensure the new district maps accurately reflect and represent the communities within them, the Commission must take into account a number of factors, including population deviations, Black voting age population, compactness scores, and partisan test results. As they stand currently, the 10 proposed draft maps reveal a significant imbalance when it comes to the partisan test results, with the majority of draft proposed maps trending to favor GOP candidates. This must be resolved.

At the conclusion of the hearings, Michigan LCV issued a press release calling for the Commission to adjust the maps based on the public comments, with partisan fairness and accurate representation of Michigan’s communities at the forefront of needed consideration. You can read our full statement here.

Please know that our Democracy For All team has been instrumental throughout the redistricting process. DFA Coordinator Mark Payne, in particular,  has worked tirelessly, attending nearly every Commission meeting and hearing, testifying countless times, and making sure our team is up-to-date on the latest developments.

As the redistricting process now moves to the next phase, Mark and the DFA team will continue to monitor the Commission. Deliberations were scheduled to begin on Tuesday in East Lansing, but a threat via email delayed the start of their meeting. The Commission’s meetings will run through November 5th when the final maps will be approved.

For a detailed breakdown, more information, and resources on the redistricting process, I encourage you to check out this week’s edition of the Democracy For All team’s newsletter, the Democracy Drumbeat.

Last week, the Michigan LCV team partnered with the Great Lakes PFAS Action Network (GLPAN) and For Love of Water (FLOW) to host a virtual town hall in Traverse City. With a growing PFAS crisis impacting the Pine Grove neighborhood, residents there are desperate for more information on what can and must be done on the local, state and federal levels to address the toxic contamination.

Dangerous levels of the “forever chemicals” were found in 18 wells in the Pine Grove neighborhood near East Grand Traverse Bay, between the Traverse City Cherry Capital Airport and the U.S. Coast Guard Air Station. Historically widely used in firefighting foam, PFAS chemicals have contaminated the community’s drinking water, and inaction by the Department of Environment, Great Lakes & Energy has left residents seeking answers. 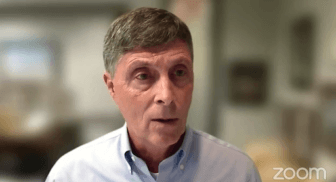 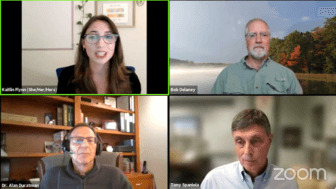 GLPAN, a coalition of PFAS-impacted individuals and activists, has been working diligently since its launch earlier this summer to catalyze action to address PFAS contamination across Michigan and the Great Lakes region. With the launch of the new organization’s policy agenda on October 12th, GLPAN has been talking with elected leaders in Lansing and communities across the state to get things moving.

In good news, yesterday Governor Whitmer issued an Executive Directive (ED) to “…minimize the purchase of products containing PFAS by state government.  The ED will serve to limit the purchase of nonessential products that contain PFAS. The State of Michigan has $2.5 billion worth of purchasing power annually, and the ED directs the Department of Technology, Management, and Budget (DTMB) to purchase PFAS-free products whenever possible. At the state-level, PFAS are primarily found in seating and office furniture, carpets, and sanitary supplies.”

This is a solid step forward in the many, many next steps that need to be taken to protect the health and safety of Michiganders. It’s also completely in line with the GLPAN policy platform that was released a few weeks ago.

If you missed last week’s town hall, you can watch a full recording of the virtual event on our Facebook page. You can also check out more information about GLPAN here.

3. The importance of voting, elections, and electing environmental champions

The November 2nd election is right around the corner and communities all across the state will be heading to the polls to cast ballots for local races.

The Michigan LCV family of organizations has been working hard over the past several months, far before the August primary, on a variety of election-related issues. Across both Michigan LCV Education and Michigan LCV (which includes our two political action committees), our teams have been focused on voter education and engagement, broadcasting far and wide the importance of voting in every election, and, in some specific areas, working to elect environmental champions to municipal offices.

Michigan LCV Education Fund: On the voter engagement front, our Democracy For All team has been running our direct voter contact (DVC) campaign for the past couple months, engaging through social media, phone banks, texting, and pop-up events in the Metro Detroit area, with the goal of making sure voters have all the information and resources they need to get out and vote. Primarily,  our DVC campaign has focused on educating voters about voting options, including voter registration, absentee voting, and early voting. This work has centered around getting people out to vote early at satellite locations and local clerks offices, as well as utilizing secure drop box locations in their communities.

I can’t tell you how important this work truly is.  Michiganders are often unaware of their voting options and the necessary steps they need to take to make sure they are registered, that they vote on time, or even if there is an election in their community.

Our Democracy for All team’s work will continue through this coming weekend, making sure the voters have all they need to make sure their voice is heard/their vote counted.  To read more about the DVC campaign and weekend voting options in this week’s Democracy Drumbeat.

Michigan LCV: On the candidate election side of the fence, our team has been focused on local elections in three communities across Michigan: Dearborn, Kentwood, and Grand Haven. Each of these communities have elections this year that have huge consequences for the future of our air, land, water, and public health, for the fight against the climate crisis, and the protection of our democracy.

In each of these communities, Michigan LCV has endorsed candidates in their respective races, which I outlined in last week’s Three Things. In Kentwood, mayoral candidate Emily Bridson has made a deep commitment to climate priorities and public health and, as a sitting city commissioner, she has the experience to make a big difference on the issues that matter most on the local level. In Grand Haven, where community-led protests of an ill-advised plan for a new power plant in an environmentally-sensitive area, Grand Haven residents have been able to catalyze change and can now continue the momentum by electing new faces. We have endorsed Kevin McGlaughlin and Karen Lowe for City Council, and Michael Westbrook and Andrea Hendrick in their races for the Board of Light & Power, all candidates who will champion positive change and protect our environment while planning for a much more sustainable  future.

In Dearborn, the third community and race Michigan LCV has been working diligently on this election cycle, has a mayoral election that will help set the course for the southeast Michigan city moving into the future. State Representative and former Michigan LCV board member Abdullah Hammoud is running to be the first Arab-born mayor of Dearborn, one of the largest Arab/Muslim communities in the world outside of the Middle East.

Abdullah’s candidacy has been an election-related priority for the Michigan LCV team since he announced he would be seeking election. Last week, we announced an ongoing six-figure independent expenditure campaign through our Conservation Voters of Michigan PAC (CVM PAC) in support of Abdullah’s candidacy for Mayor. This campaign is focused on building support for him in the community in which he was born and raised through focused ads and strategic funding. You can read our full statement on the independent expenditure campaign here.

Our work continues this week and over this weekend as our team will be in Dearborn Friday, Sunday, Monday, and Tuesday to canvass neighborhoods and knock doors, talking to residents about Abdullah and why electing him as mayor will bring positive change to the community through his focus and dedication to climate and infrastructure priorities. It’s crunch time for the campaign and our work related to it! If you are interested in volunteering to canvass for Abdullah, you can sign up using this Google form. Please contact our A&O Organizer Ethan Petzold with any questions at ethanp@michiganlcv.org.

As I say every week, thanks for all you do to support our work.  All this is possible because of YOU!