Welcome to the November 3, 2022 edition of Three Things Thursday!

With Election Day less than a week away, I’ve been thinking about words to describe how I feel. There are so many ways to characterize the rollercoaster of emotions experienced inside an organization that is putting its heart and soul into the preservation of our democracy and the protection of our planet. But I’ve settled on: trepidatious, inspired and hopeful.  Here’s why:

The scars left in the aftermath of the 2020 election are not yet healed for many of us. The horrific scenes from Detroit’s TCF Center where hoards of misinformed, hate-filled people tried to silence the voices of Black voters still haunt me. Two Michigan LCV teammates were inside that room, and witnessed the poll worker harassment and intimidation first-hand.

I’m also haunted by the attempted insurrection that took place on January 6, 2021 in our nation’s capital, an event that left numerous people dead and over 100 people injured, and by the vitriol that has continued since, flowing freely from candidates and campaigns across Michigan and the nation. Beliefs and actions that were once considered to be on the fringe of our political landscape are now front and center.

We see this in all three major Michigan races this year, with Republican candidates for Secretary of State, Attorney General and Governor stoking the fire of the Big Lie and refusing to admit that the 2020 election was free, fair and secure.  DePerno, the Republican candidate for attorney general, is also the subject of criminal investigation regarding nefarious behavior following the 2020 election.

As recently reported by Gongwer News Service, the Sec. of State “… is spending a good chunk of her time during this campaign cycle preparing to intercept and dismantle conspiracies that could spring up during the next two major elections.” Sec. Benson said democracy is what is most at stake this election cycle, “…democracy is on the ballot this November”.

But the door knockers didn’t explain where to vote or promote a candidate, the usual work of canvassers ahead of a big election.

Instead, they grilled residents on their voting history and who lived in their homes, probing questions that might have violated state laws on intimidation and harassment, according to the county’s chief election official.

In at least 19 states, pro-Trump canvassers are using their findings to press election officials to clean up what they claim are inaccurate voter-registration lists, saying they could open the door to fraudulent voting.

In at least one state, Michigan, they plan to use their list of alleged irregularities to challenge voters in the Nov. 8 election.

All of this leaves me feeling very trepidatious.  The democracy we all thought rock solid seems far too precarious given the onslaught of disinformation and frightening displays of bigotry and hate.

Despite my trepidation, I also feel inspired heading into Election Day.

We have three incredible women running for re-election at the top of the ticket, all of whom have demonstrated exceptional courage and a deep commitment to addressing the existential issues of our time: the global climate crisis; access and affordability of clean, safe drinking water; and the preservation of our democracy. Gretchen Whitmer, Jocelyn Benson and Dana Nessel have not only earned well-deserved recognition on the statewide stage, but they have each also catapulted to the national stage due to their bold leadership over these past four years. 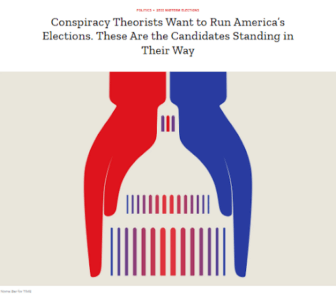 These are the kind of leaders our state needs as we weather uncertain times.

I’m also feeling inspired by President Barack Obama who was in Detroit last Saturday speaking at a rally in support of Gov. Gretchen Whitmer and the other amazing array of candidates on the ballot.  A man of great integrity, President Obama’s fine sense of humor, core values and deep commitment to the people of this nation has buoyed me over the years. I have listened to the wonderful conversations between President Obama and Bruce Springsteen in their podcast series Renegades many times. 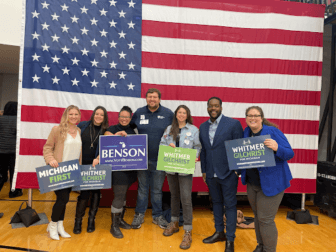 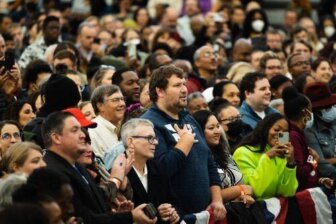 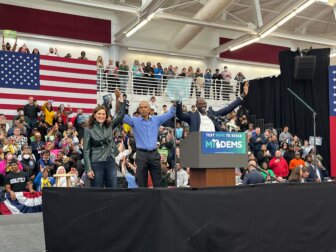 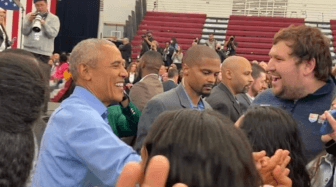 In times of great turmoil – and, yes, trepidation – I was thrilled that a number of my colleagues were present on Saturday. They got to witness first hand President Obama’s deep dedication to our democracy, which was conveyed with his indelible charm, intelligence and good humor, leaving them all energized and inspired to “run through the tape” of this election cycle.

And, yes, I remain hopeful.  I am hopeful because I see the amazing work being done by this talented Michigan LCV team – the majority of whom are the next generation of leaders – and I know it’s having an impact.

Our Democracy for All team is mobilizing thousands of voters in Grand Rapids and Detroit to participate in the election, working with clerks to ensure they have what they need and are well supported,  and recruiting poll challengers to ensure voters are not harassed or denied the right to vote.   Check out these great videos featuring Brooke and Clare!  Check out these radio ads that are running in Detroit! 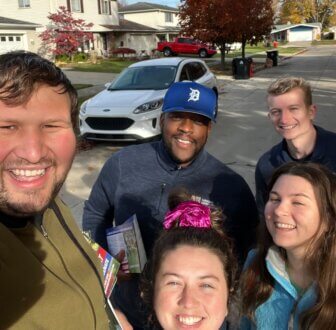 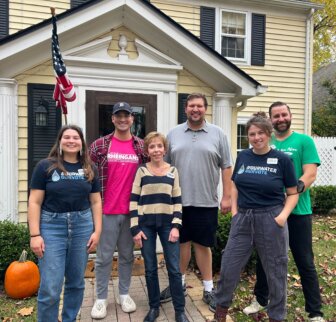 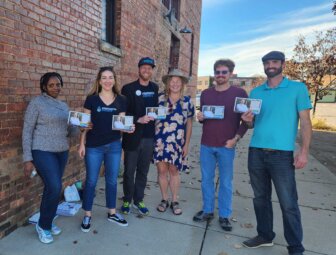 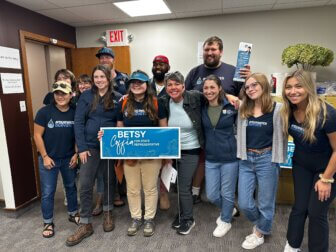 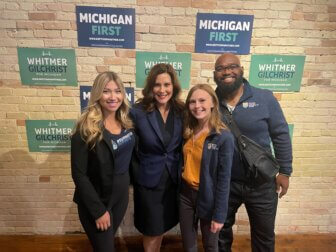 Our work on behalf of the three women at the top of the ticket, as well as Supreme Court candidates Kyra Harris Bolden and Justice Richard Bernstein and down ballot legislative candidates, is the largest campaign of its kind in our organization’s history. We recently “leaned in” even more to support AG Nessel with a big ad buy in West Michigan to ensure that voters really understand what Matt DePerno is all about.

I am also hopeful because all this work is only possible with people power.  It’s the power of the people that ensured both Proposal 2 (the preservation and expansion of our voting rights) and Proposal 3 (the right to reproductive freedom) were put on the ballot. And it’s the power of the people making their voices heard in this election that will ensure Michigan sets an example for the rest of the nation, illustrating that justice, equity and a shared sense of humanity will prevail.

With only five more days until Election Day, please do whatever you can to support the candidates and causes on the ballot. The polling tells us all the races will be incredibly close and every single conversation with voters really matters.

Thank you for all you do!  I look forward to “seeing” you on the other side of November 8th.

P.S. Two of the many other reasons I feel inspired: