Welcome to the November 10, 2022 edition of Three Things Thursday!  In my sleep-deprived state, I write to you about the election outcomes, which I know you are celebrating just like me, along with millions of others both here in Michigan and across the country.

1. Big electoral wins for Michigan’s water, voting rights, civil rights and the health of our democracy

Tuesday was Election Day and Michiganders turned out in historic numbers to make their voices heard. Contrary to many predictions from experts and casual observers alike, the “Red Wave” thought to engulf much of the country, giving the Republican Party large majorities in both houses of Congress, governors’ offices and state legislatures, did not come to fruition.

Instead, pro-democracy, pro-clean drinking water, and pro-women’s rights candidates won their races, especially here in Michigan. Michiganders took full advantage of our expanded voting rights (provided to us in 2018), voting early in large numbers and turning out in droves at the polls. Election-denying candidates across the board were rejected – a clear indication that Michigan voters are tired of extreme partisan politics and that they support candidates who focus on the issues that matter most in their everyday lives.

The Michigan LCV team – a team of incredibly smart, dedicated individuals who worked tirelessly over the past many months, including countless hours this last weekend for GOTV efforts and on Election Day at the polls – watched as Gov. Whitmer, Attorney General Nessel and Secretary of State Benson won by large margins and our endorsed down-ballot candidates emerged victorious across the state, flipping the balance of the Michigan Legislature to a pro-democracy/pro-environment majority for the first time in decades! 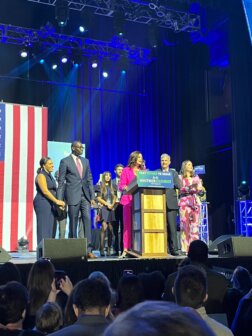 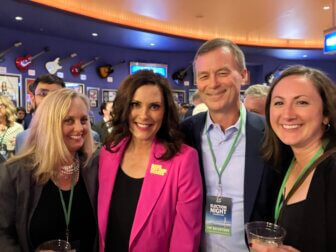 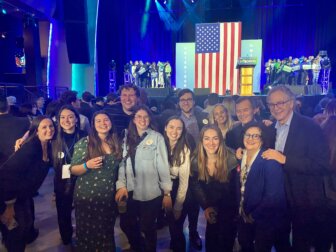 Some Michigan LCV teammates were in Detroit as the results came in Tuesday night! 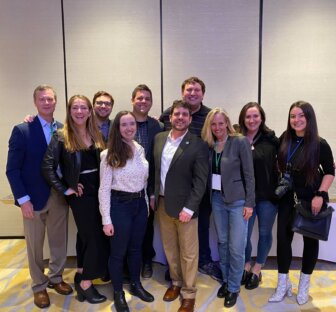 Also successful were statewide Proposals 2 and 3, which codified Michiganders’ voting and reproductive rights into the state constitution, a huge victory for democracy and women’s health; and local initiatives in Ann Arbor and Oakland County supporting action on climate change and public transit passed as well.

In short, the 2022 midterms were a sharp rejection of the dangerous Trump agenda and enormous support for the protection of our environment, tackling the climate crisis, investment in public health and our democracy. 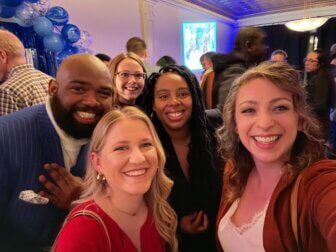 Here’s a snapshot of why Tuesday was a huge victory for us and why Michigan is a big win for the Conservation Voters Movement from a national perspective:

For historical reference, the last time Michigan elected a democratic governor in a midterm election when democrats controlled the White House was in 1950. Democrats have not had control of the state Senate since 1983 and the House since 2010.

With a victory like this comes enormous responsibility. It is imperative that we now roll up our sleeves to fully implement Governor Whitmer’s MI Healthy Climate plan, boosting our state’s investments in clean, renewable energy and taking action to address the climate crisis. We must double down on protecting our water, addressing water affordability and holding polluters accountable. And we must work to clean up our air so every Michigander has clean air to breathe and a livable future.

As President John F. Kennedy said in a 1961 speech, referencing the Gospel of Luke, “To those whom much is given, much is expected.”  It is imperative that our newly elected leaders understand the opportunity before them, and that they embrace it thoughtfully, strategically and with eye always to the priorities and values of the people they serve. The Michigan LCV team intends to be there with them every step of the way.

This year, we ran the largest campaign in our organization’s history to re-elect clean water and democracy champions up and down the ballot. After countless hours of planning, fundraising and strategizing, Michigan saw historic results at the ballot box Nov. 8, and these wins will undoubtedly translate into meaningful victories for #OurWater and the people of Michigan!

Here’s what we did:

In total, our ads were viewed millions of times, all centered around our core narrative of clean, safe drinking water, accountability and defending democracy.

During the final weeks of the campaign, the Attorney General’s race appeared to be narrowing, with multiple polls showing AG Nessel only up by a couple percentage points and within the margin of error. This headline from the Detroit News a week ago tells the story, “Nessel, DePerno in statistical tie in race for AG, poll says.”

Our team sprang into action, raising much-needed additional funding and investing heavily in West Michigan TV. Our ad“Running From The Law” ran on all major stations over the final week leading up to November 8, hitting Matt DePerno hard on his troubling and potentially criminal track-record as a private attorney, helping define him for voters as they made their final decisions.

In just four days leading up to the election, our team executed its largest volunteer infused GOTV effort ever, knocking more than 8,000 doors in critical battleground districts.

In a tough midterm election, voters turned out, especially young and first-time voters. Students at the University of Michigan, Michigan State, Western Michigan University and more waited for hours undeterred to register and vote on election day. 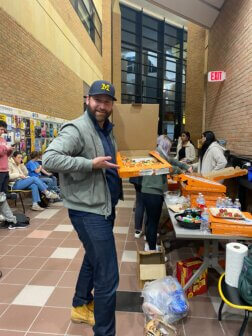 Michigan LCV’s federal government affairs director Bentley Johnson helped boost morale in Ann Arbor, showing up with pizza for U of M students who waited in line to vote, some for more than six hours!

What we witnessed on Tuesday was Democracy in action, and Michigan LCV played an enormous role in the outcome!

3. Our Democracy For All team promoted and protected our vote

As noted, Tuesday’s election was historic for Michigan in terms of voter turnout. With precincts across the state experiencing higher turnout than previous midterm elections – and in some cases, presidential elections! – there is no doubt that Michiganders made their voices heard!

Dedicated to ensuring our democracy is safe, fair and works for every Michigan voter, our Democracy for All (DFA) team worked throughout the days, weeks and months leading up to the election (and on Election Day) to ensure Michiganders understood their voting rights, knew how to tap into voting resources, and could participate in our democracy without fear of intimidation or violence and knew that their vote would be counted.

Our Direct Voter Contact (DVC) team – known locally as 313 Votes and 616 Votes respectively – worked tirelessly to engage and educate voters through in-person tabling events at local farmers markets and virtually via hundreds of thousands of calls and texts.  Our team was able to have conversations with thousands of voters in the greater Metro Detroit and Grand Rapids areas, making sure members of the community had the information and resources they needed to make a plan to vote and cast their ballots. 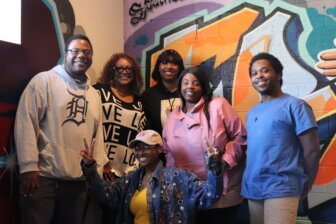 A few of the members of our 313 Votes Direct Voter Contact team!

After the 2020 election – which included the chaos at Detroit’s TCF Center and the fallout of Donald Trump’s Big Lie – we expected the worst in terms of anti-democracy rhetoric and attempts to delegitimize the results of the election. We prepared meticulously for all the “what ifs”, which meant that the Michigan LCV team worked more than 130 hours of poll challenging and poll worker shifts to counteract any and all attempts from election deniers to intimidate voters, dispute ballots and results and infringe upon voting rights.

I’m delighted to report that very few incidents took place and when issues did arise, they were addressed swiftly. Most of those working the polls – Republicans, Democrats and Independents, alike –  bore witness to a well-functioning voting process in which historic numbers of voters participated.

It’s been quite a week. Michigan has set a new standard for what is possible and we will be expected to provide real results for the people of this great state. I hope you will roll up your sleeves and join us!  But tonight, tomorrow and over the weekend, please spend some time celebrating.  This was a BIG DEAL and, just like our Whitmer ad (which I love!) says, Michigan is going BIG!

Thank you for EVERYTHING!

Please join us Wednesday, November 16th at 12 pm for an exclusive, insider look at the outcomes of the elections. Our Deputy Director, Bob Allison, will help interpret voter turnout, ballot initiatives, and the most-watched races at the state and federal levels. We will also share some stories from the field–what our poll challengers and volunteers on our Elections Hotline encountered, both hostile and friendly.  And finally, you’ll have the chance to ask questions.

The debrief is free, but you have to register to participate.  Please register HERE for the Zoom Link.