Welcome the May 6, 2021 edition of Three Things Thursday! As the Michigan LCV team continues to tackle a wide array of issues, the underpinning of all our efforts remains a deep commitment to equity, justice and a safe, sustainable future for us all.

This week’s edition of Three Things is a reflection of that, with focus on Line 5: shutting down the ticking time bomb”; Michigan’s legislative redistricting process; and a look at the latest developments in Lansing as Michigan Republicans try to pass a legislative package that takes direct aim at voting rights.

1. Our People, Planet, Public Health Line 5 webinar & what to watch for as the shutdown deadline date approaches next week 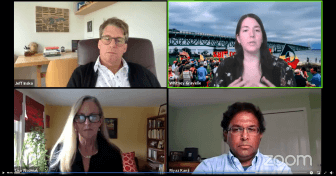 Jeff Insko, a professor at Oakland University, is a landowner who has been dealing with Enbridge for years because their Line 6B pipeline literally runs through his backyard in northern Oakland County. As you may remember, Line 6B pipeline is the same pipeline that ruptured near Marshall, MI in 2010, spilling a million gallons of Alberta tar sands crude oil into the Kalamazoo River. Over the past 11 years, Jeff has become a citizen expert on both Line 6B and Enbridge, launching the Line 6B Citizens Blog to provide community members with vital information and give voice to impacted residents.

Among Jeff’s many powerful comments, he highlighted Enbridge’s clear pattern of behavior, which includes lack of proper maintenance on all their lines, and a resulting history of spills both on land and in numerous waterways throughout the region.

President Whitney Gravelle spoke about the critical importance of tribal sovereignty rights, particularly in the Straits of Mackinac. She emphasized that the 1836 Treaty of Washington, which ceded large portions of land and water to the U.S. government in the creation of Michigan, gave rights to the indigenous peoples of Michigan to hunt, fish and gather in much of these lands and waters, including the Straits.  Enrbidge’s lack of care for the land and water, much of which is sovereign,  is a threat not only to our environment, but to the cultural heritage and traditions of the Bay Mills Indian Community and other tribal nations.

Riyaz Kanji, who is a senior partner at Kanji & Katzen, a law firm specializing in tribal rights, spoke specifically about the current status of the legal battle, including the timeline over the last year and Gov. Whitmer’s decision to revoke the easement agreement with Enbridge. Riyaz also highlighted Enbridge’s large-scale PR campaign, which falsely claims that Michigan is reliant on Line 5 and that shutting down the pipeline would cause severe economic distress.

The bottom line is this: come May 12, 2021, all operations pumping oil through the Straits are legally required to cease. Enbridge, however, has made it clear that it has no intention of complying with Gov. Whitmer’s order. The Michigan LCV team is working closely with an array of partner organizations and experts, like those on our webinar this week, to ensure that Enbridge is held accountable for their blatant disregard of the law.

As President Gravelle emphasized at the end of the webinar, the most effective and important thing you can do right now to aid in the fight to shut down Line 5 is to contact your lawmakers. The more voices united in opposition to Enbridge as they continue to take advantage of the people of Michigan, the better chance we have of preventing a catastrophic oil spill in our majestic Great Lakes.

Next Thursday, May 13th, people will be gathering (outdoors and masked) in Mackinaw City and Lansing to send a message to Enbridge that they are officially operating illegally and trespassing in Michigan. For more information on how to get involved and to sign up for those events, click here.  I also invite you to take a few minutes and watch the webinar, which was recorded so that as many people as possible can learn from our expert guest speakers. You can access the full recording here.

2. Join us tonight for a webinar on Michigan’s redistricting process

Over the last few weeks, our Democracy For All team has been preparing for the first public hearing of the Michigan Independent Citizens Redistricting Commission, which will be held on Tuesday, May 11, 2021 at 6pm.

Thanks to the passage of Proposal 2 in 2018, which was championed by Voters Not Politicians, the Michigan redistricting process is being overseen by citizens rather than politicians and lawyers who, in past years, have conducted the process behind closed doors. This means that there is a chance for all of us — you, me, our neighbors and friends — to make our voices heard, as the Commission will use public hearings to inform their work of drawing fair district lines for our elections.

But, this is complicated stuff for most people. What does it mean to redraw the maps? Why does it matter? And, will my voice really be heard?  Our Democracy For All team has been working to engage, educate and mobilize communities, demystifying the process and making sure that everyone who wants to participate understands how and when to do so.  It is so important for people to understand that: (1) Michigan is one of the most segregated and gerrymandered states in the country; (2) the process for drawing legislative districts in the past has contributed to some communities losing effective and fair representation when it comes to elections; and (3) this is our opportunity to make much-needed change, establishing equitable districts for the first time in Michigan history.

As part of this effort,  we are hosting a virtual Redistricting Commission Update tonight at 6 PM,  featuring special guests Mariana Martinez, Director of Civic Engagement Initiatives for the Michigan Nonprofit Association and Commissioner Dustin Witjes, a member of the Michigan Independent Citizens Redistricting Commission.  Included in the program will be information on the function of the newly created Commission, who the commissions are, what types of public meetings they will be holding in the coming weeks and months and how to get involved in the process.

If you aren’t registered for tonight’s webinar yet, there is still time to secure your spot.  I invite you to visit our registration link HERE.  You can also stay up to date on the redistricting commission and the entire process by visiting redistrictingmichigan.org.

On Wednesday, the Senate Elections Committee held another in a series of hearings on bills that make up the 39-bill anti-voting rights legislative package proposed by Republican lawmakers. Following the historic election of 2020, in terms of voter turnout, this reactionary legislative package is a direct attack on free and open elections; a clear attempt to make voting harder for many Michigan voters, not easier.

Last week, the Senate Elections Committee’s agenda focused on key bills in the package that would make it harder to vote by absentee ballot.  Senate Bill 287, as example, prohibits local governments from providing prepaid ballot return envelopes as has been provided in past elections.  We swiftly issued a press statement, describing the barriers this ill-conceived bill would create for Michigan voters.

Senate Bills 273 and 286 focus on drop boxes, restricting their hours of operation and requiring clerks to add unfunded additional security to existing and new drop boxes. Together, these bills would make voting less accessible for people across Michigan, especially those living in rural communities and those who work during clerks’ typical office hours. Ballot drop boxes are a secure and convenient way for voters to return absentee ballots. We strongly believe that any attempt at modernizing ballot drop boxes should be driven by city and township clerks, with support and funding from Michigan lawmakers. In short, these bills would cause unnecessary and alarming infringements upon our democratic process. Again the Michigan LCV team quickly issued a statement in opposition to both SB 273 and 286, which you can read here.

The Elections Committee tends to meet weekly on Wednesdays at 2pm and they will maintain focus on different aspects of this anti-voter 39-bill legislative package.  As that process moves forward, the Michigan LCV team will continue our efforts to educate and shed light on the real intent behind these bills.  We will be sure to provide updates and ways you can get involved. If you want to take immediate action, you can visit our Take Action page on our website.

As we saw during the 2020 election, record numbers of Michigan voters safely and securely cast their ballots while grappling with a global pandemic, a strong indication that our election system works. Not only is it functional and efficient, but free and fair as well, allowing Michiganders to make their voices heard. This is something that we should celebrate, while continuing to work on the protection and expansion of voting rights for all citizens across our state. What Republican leaders in Lansing are doing to undercut our democracy is a true abomination and they must be held accountable.

As always, thank you for your trust and support. None of this is possible without you.

P.S. In case you missed this news:

Governor Whitmer will be among seven people honored with the John F. Kennedy Library Foundation Profile in Courage Award for service during the COVID-19 pandemic.  These seven outstanding individuals were selected among thousands of nominees from around the nation.

“Today’s honorees put their own lives at risk to keep others safe. They inspire us all with their courage and give new meaning to President Kennedy’s legacy of public service,” said Caroline Kennedy, the president’s daughter and honorary president of the foundation.

Also, this week is Municipal Clerk’s Week, a time to show our appreciation and give thanks to all the incredible election workers and clerks across Michigan that make our elections possible. Municipal clerks work around the clock, often without adequate resources and staff, to ensure our elections run smoothly, and are free, fair, and accessible to all Michiganders. The freedom to vote as we know it would not be possible without these individuals and their tireless work. If you or someone you know is a local clerk or has been an election worker, thank them for their service and devotion to our democracy this week!