Welcome to the May 12, 2022 edition of Three Things Thursday!

Before we get into this week’s Three Things, I encourage you to check out our Michigan LCV April Recap video, which highlights our teams’ work on Gov. Whitmer’s recently released MI Healthy Climate Plan, new legislation introduced by Reps. Abraham Aiyash and Yousef Rabhi to hold our utilities accountable, and more. 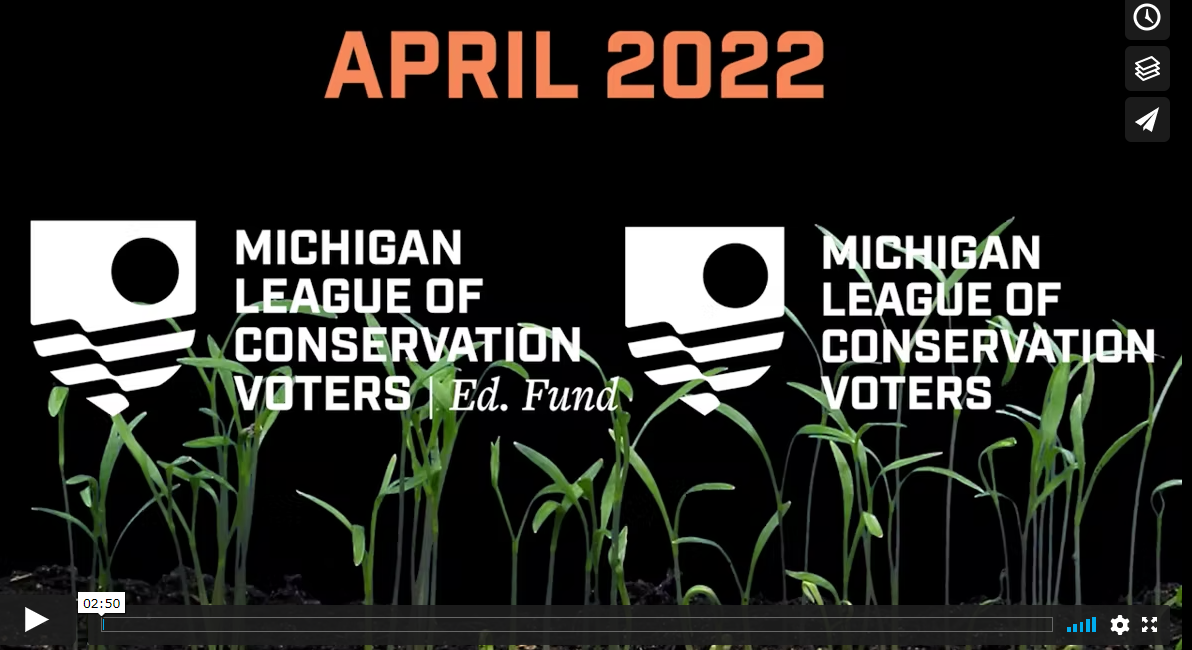 This week’s edition covers the Michigan LCV’s recent participation in a number of events and trips, both in Michigan and this week in Washington, D.C.; a spotlight on threats to environmental justice and the work we must all be doing to address them; and an introduction to another new Michigan LCV staff member. Let’s jump in!

1. The Michigan LCV team in action: Detroit, D.C., and everywhere in between

If you’ve read our most recent edition of the Washington Weekly, you know that our Federal Government Affairs and Democracy for All teams have been incredibly busy.

Last Wednesday, Federal Government Affairs Director Bentley Johnson attended a ribbon cutting ceremony for the reopening of the new John D. Dingell, Jr Visitor Center at the Detroit International Wildlife Refuge. I really wish I could have been there, but I was away from the state, as you know from last week’s Three Things Thursday. 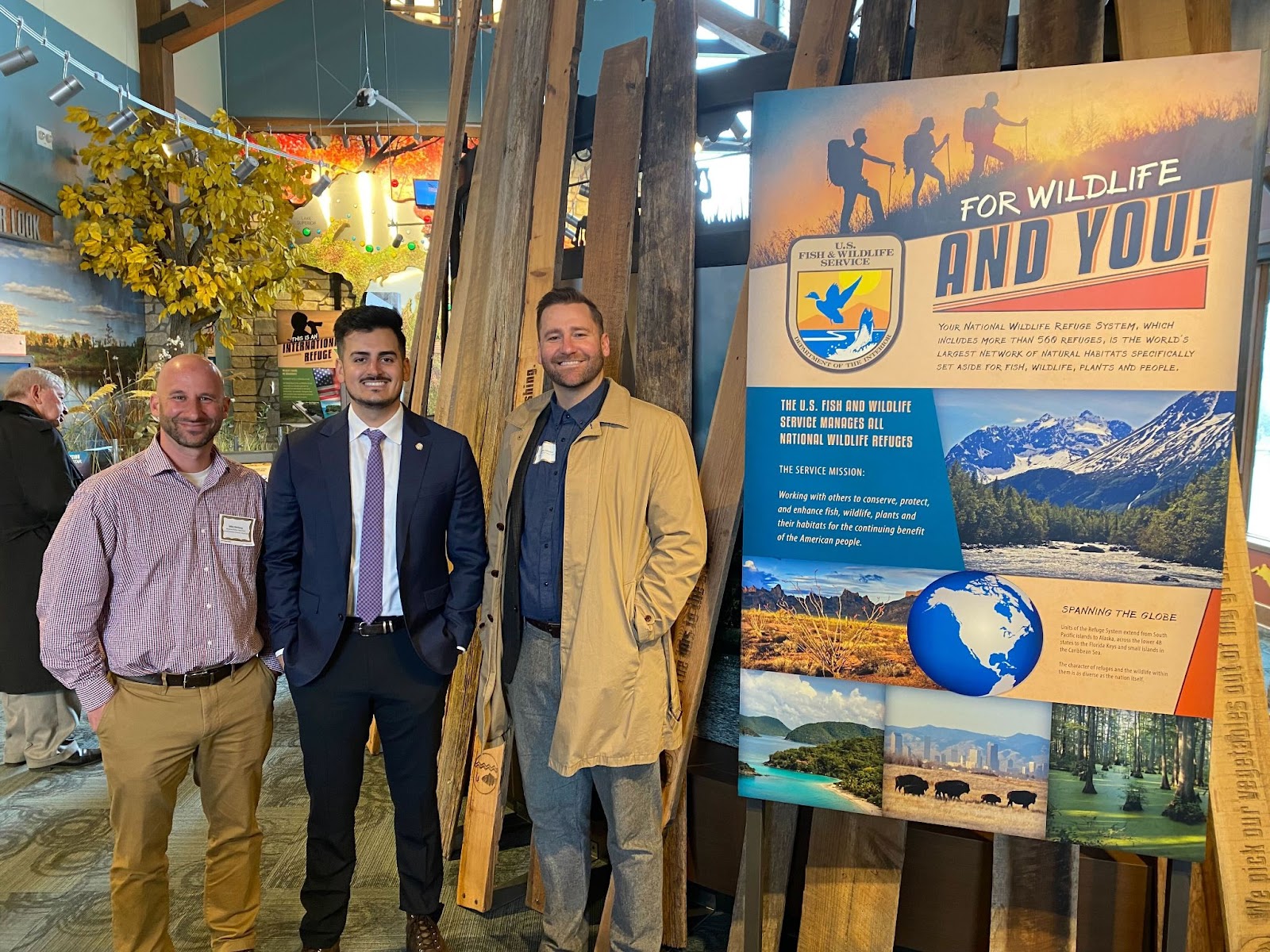 Congresswoman Debbie Dingell and Secretary of the Interior Deb Haaland were both there to mark the occasion, paying tribute to the legendary Michigan Congressman whose vision and dedication made possible the establishment of the first and only International Wildlife Refuge in North America, spanning 48 miles of the lower Detroit River and western Lake Erie ecosystem and shoreline. 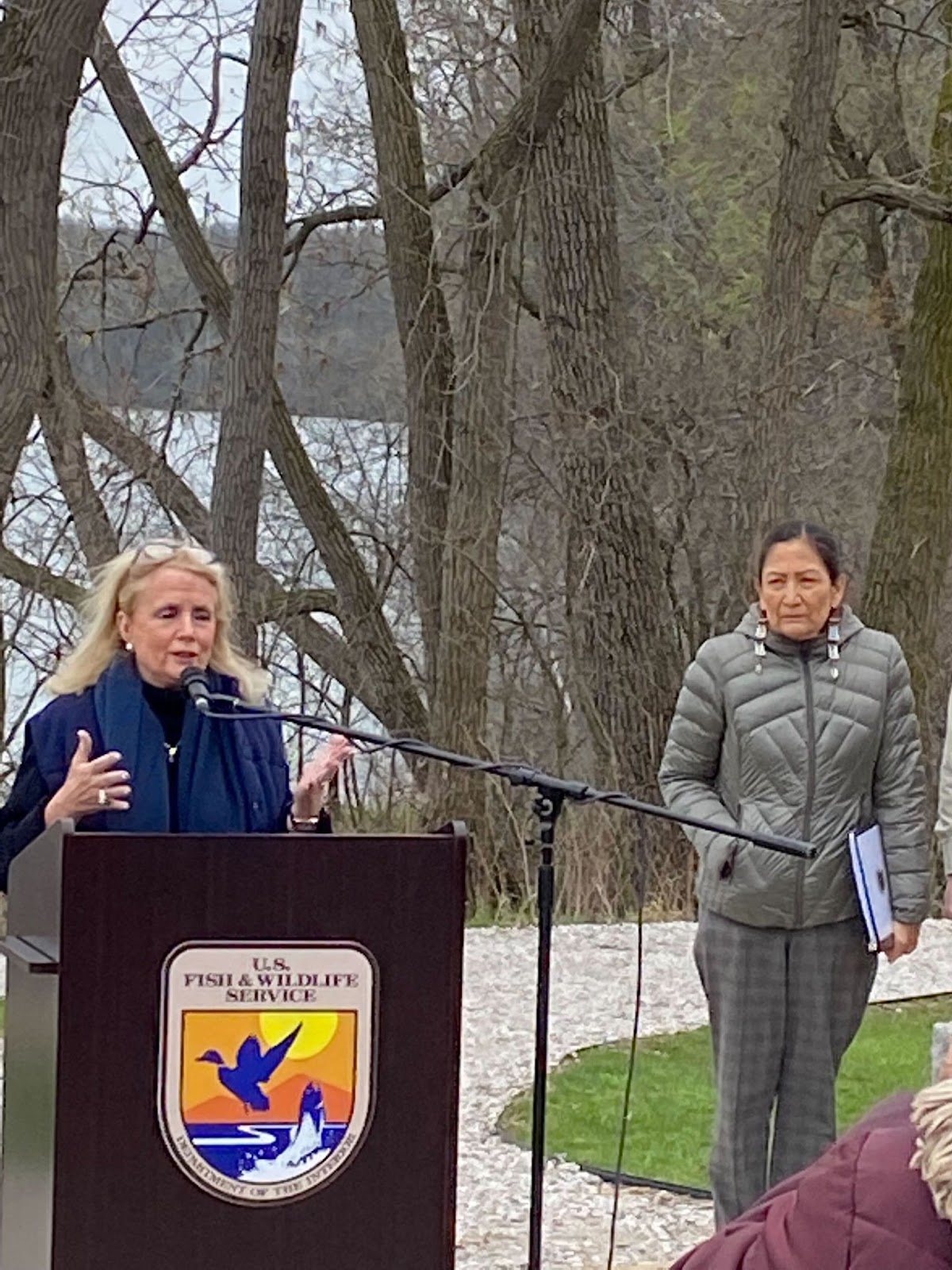 As Congresswoman Debbie Dingell recounted in her remarks, John Dingell grew up hunting, fishing, and falling in love with the great outdoors. In his later years, he made it his personal mission to establish a refuge along the Detroit River to protect the habitat that is home to 30 species of waterfowl, 117 kinds of fish, and over 300 species of birds. Thanks to a collaboration with former Canadian Deputy Prime Minister Herb Grey, Congressman Dingell was able to bring together agencies and stakeholders at all levels across the two nations, which ultimately led to Mr. Dingell’s Refuge legislation being enacted and signed into law in 2001. 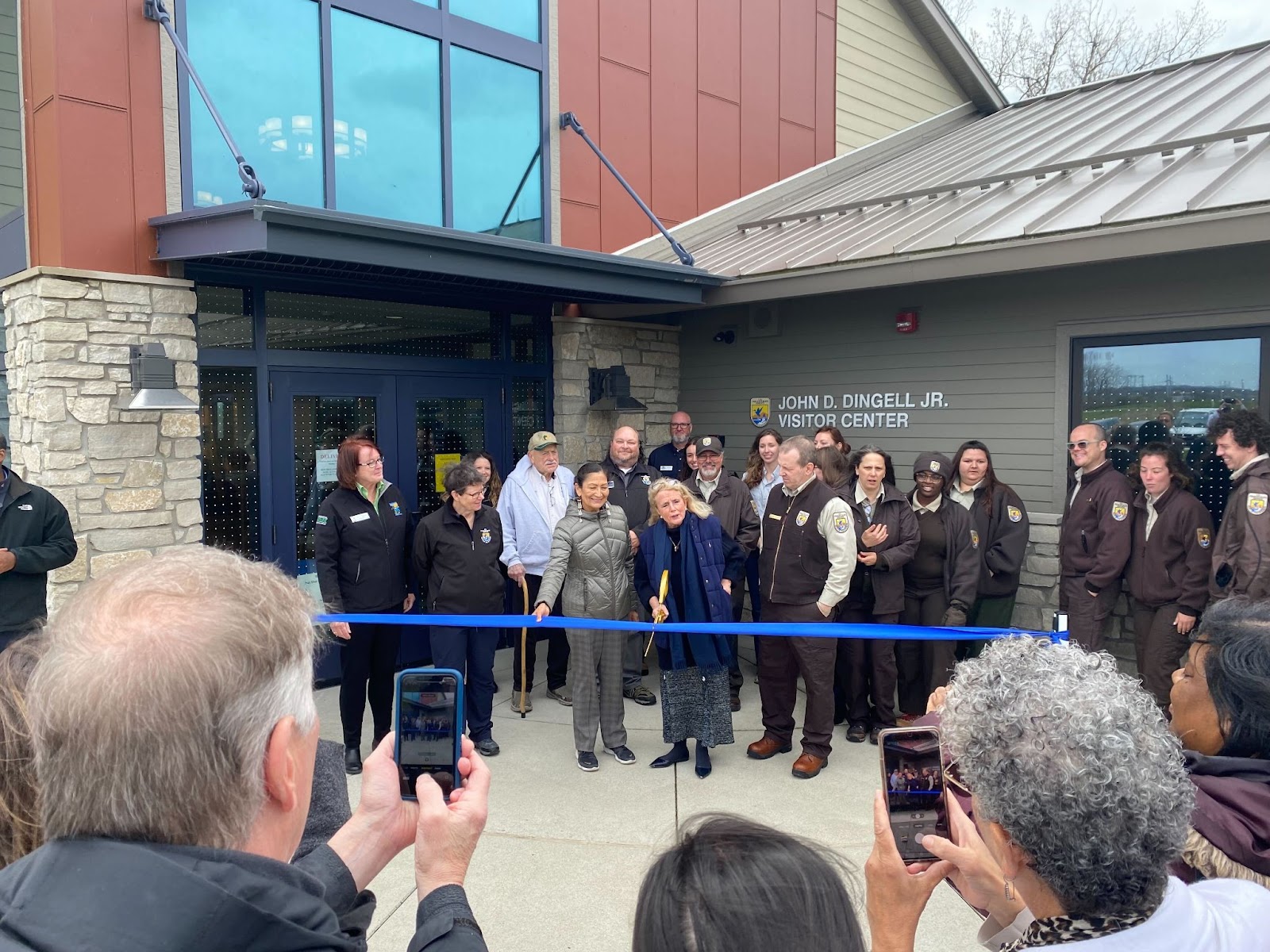 In her remarks, Secretary Haaland emphasized the power of partnerships, which included a tribute to the Anishinaabe people, the original stewards of the land and waters in this region.

I remember visiting the Refuge with the Congressman years ago, alongside my colleagues from the National Wildlife Federation and the Wolfpack. It was a lovely day and, once we were gathered along the shores of the river, Congressman Dingell challenged us to make the establishment of a visitor’s center and the overall celebration of the Refuge a priority in the coming months and years. It’s amazing to see all of the hard work of many – notably the Congressman – come to fruition years later! 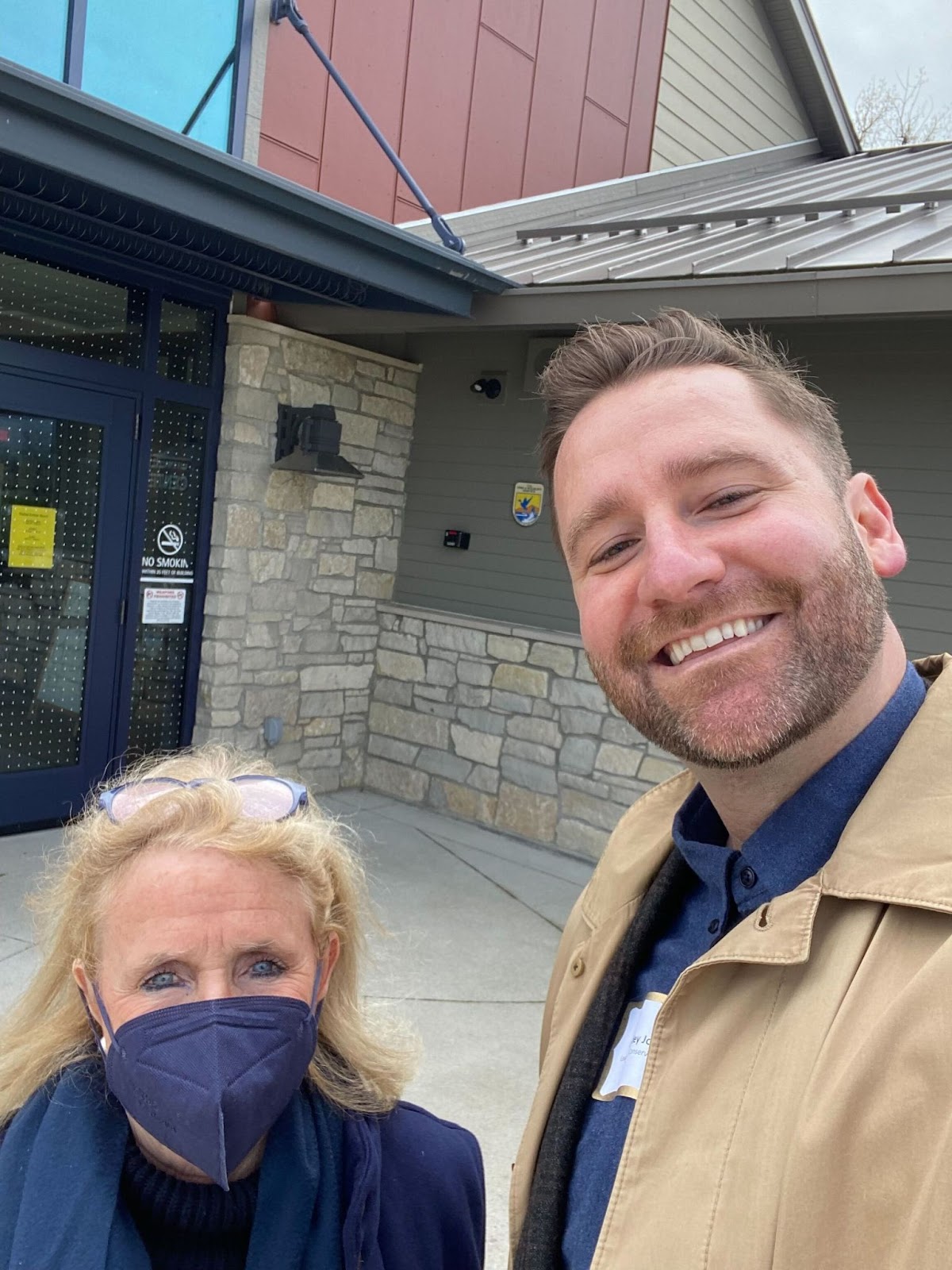 In her closing remarks, Congresswoman Dingell emphasized how much her late husband loved this special place, even asking her on the last day of his life to “take care of the Refuge.”

The Refuge visitor center is located in Trenton and, if you haven’t been there, it’s well worth a visit!

This week, our Federal Government Affairs and Democracy for All teams traveled to Washington, D.C. to meet with members of the Michigan Congressional Delegation, as well as attend the annual America Votes Summit.

Federal Government Affairs Director Bentley Johnson and Federal Government Affairs Coordinator Hudson Villeneuve represented the organization on Capitol Hill, emphasizing in every meeting the urgent need to pass climate, jobs and justice legislation and protect voting rights. They met with Sen. Gary Peters, Rep. Andy Levin, Rep. Rashia Tlaib, and Rep. Elissa Slotkin, as well as members of Sen. Stabenow’s team, sharing stories from Michigan communities impacted by climate change, insights into Michigan specific issues – like Line 5– and even drawings from kids who are worried about what is happening to the environment to demonstrate the urgent need for action in DC.

Voting Rights Coordinator Brooke Harris attended a number of important sessions at the America Votes Summit, one in particular entitled, “Election Protection in a Post-Truth Era,” which featured the Canton Township clerk and several of our local and national partners. Brooke also had an important meeting with a leader from the Bridging Divides Initiative, a non-partisan research initiative that tracks and mitigates political violence in the United States.

Environmental justice is at the core of practically every important issue that Michigan LCV works on. It certainly sits at the heart of our strategic plan and is embedded in our organizational values, which include people-centered power, inclusivity, innovation and justice.

Communities of color and low-income communities across Michigan experience the disproportionate impact of climate change and toxic air and water pollution. In fact, Michigan is home to one of the most polluted zip codes in the country: the 48217 zip code in Southwest Detroit.

Michiganders who call the 48217 zip code home have long been dealing with the outsized impacts of toxic air and water pollution brought on by the large automotive, steel and fossil fuel industries that surround their neighborhoods. Hemmed in by known, chronic corporate polluters like AK Steel and the Marathon Oil refinery, residents deal with disproportionate rates of serious health conditions – including asthma and other respiratory problems, cancer, and heart disease, to name just a few.

Theresa Landrum – a longtime environmental justice activist, resident of Southwest Detroit, member of both the Michigan Advisory Council on Environmental Justice and the Michigan PFAS Action Team, and friend of Michigan LCV – was featured in a recent story from WXYZ 7 Action News. This story focused most specifically on PFAS “forever” chemicals, but Theresa took the opportunity to highlight what it’s like to live in a community suffering from the disproportionate impact of corporate pollution in all different forms. Here is an excerpt:

I’ve got a filter. I run the filtered water and I boil my water every day,” said Theresa Landrum, a lifelong southwest Detroiter who lives not far from big industry sites like Marathon.

She’s been boiling her drinking water since 2007. It’s a decision she’d made on her own, not trusting what’s coming out of the faucet.

“I am a cancer survivor. My mother and father both had cancer. My sister had cancer, my aunt had cancer,” Landrum told Action News.

Those illnesses are ones Landrum links to environmental pollution, including PFAS.

“A few years ago, right here up on Schaefer Highway, there was PFAS bubbling up, foam just rolling out,” Landrum recalled.

She’s become outspoken about the need for local, state, and federal agencies to better address environmental pollution, particularly in communities of color.

“I didn’t become an activist out of career choice. I was forced into it out of necessity,” Landrum said.”

The same communities suffering from adverse health impacts caused by disproportionate  pollution are also experiencing the disproportionate impact of the accelerating climate crisis in the form of floods and prolonged power outages. Last year, when severe summer storms brought historic rainfall, Southwest Detroit was one of the areas hit the hardest. As you may remember, homes, businesses, roads, and highways were submerged in up to four feet of water, causing catastrophic damage to already outdated, failing infrastructure.

Here is one of the videos our communications team produced to raise awareness and call for action to address what the communities of Southwest Detroit are experiencing. Please watch it! 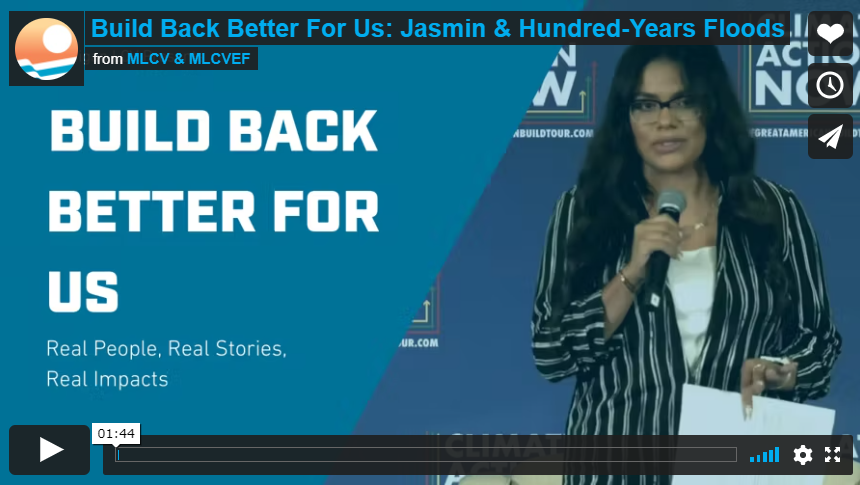 We are following the lead of our environmental justice partners, like Theresa Landrum, Monica Lewis-Patrick at We the People of Detroit, and Racquel Garcia at Southwest Detroit Environmental Vision, and we are demanding action to address the climate and water crises in both Lansing and Washington, DC.

On a positive note, in last week’s Three Things I highlighted Dr. Jalonne White-Newsome’s appointment as the new Senior Director for Environmental Justice for the White House Council on Environmental Quality. As a native of Detroit and a longtime champion of environmental justice issues, Dr. White-Newsome’s appointment is a big win for the environmental justice movement and communities that have long suffered while feeling as though they have no voice to facilitate change. In her new role, Dr. White-Newsome has the power to create change for these communities and make a real difference for places like Southwest Detroit.

Finally, I want to highlight the most recent 1st Friday Focus on the Environment radio show.  Last Friday, WEMU’s Program Director David Fair and I sat down with Derrell Slaughter – an Ingham County Commissioner, the Michigan Clean Energy Advocate for the Natural Resources Defense Council and a member of Governor Whitmer’s Climate Council – to discuss the importance of climate justice and the Governor’s new MI Healthy Climate Plan.  Our discussion aired as the May edition of WEMU 89.1 FM’s 1st Friday Focus on the Environment. You can listen to the conversation in its entirety here. It’s yet another example of how environmental justice needs to be woven into all that we do to address the climate and water crises facing our state.

The Michigan LCV search for talented, dedicated individuals to join our team in a variety of different roles continues and I’m delighted to say that our team is growing. This week, I am excited to welcome Victoria Stewart to the Michigan LCV family! 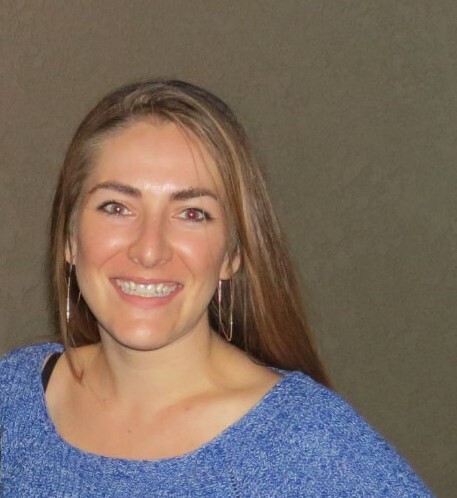 Victoria joins us as our new Director of the Advocacy & Outreach (A&O) team, an integral role within the organization that has been vacant for several months. She brings extensive expertise from over a decade of work on statewide legislative and candidate campaigns in battleground states and rural community organizing.

Victoria began her work focused on healthcare, building statewide coalitions dedicated to bettering health outcomes and reducing the health disparities plaguing low income, houseless, and minority communities. After moving to the Midwest in 2018, she worked with the Democratic Party of Wisconsin and became increasingly interested in climate, water, and renewable energy organizing and messaging in very polarized rural communities in Southwest Wisconsin.

Victoria’s career spans work to increase voter education and turnout. She is passionate about digital organizing and fundraising, people power, and the ability for campaigns and organizing to create real, tangible change.

Born on the West Coast, Victoria has seen firsthand the effects of the climate crisis on our coastal communities. She now splits her time between Hartford, Michigan and Madison, Wisconsin, where she lives with her partner and three-legged cat, Achilles.

We are thrilled to have Victoria joining the Michigan LCV family!

As always, thank you for all you do to support our work! None of this would be possible without you.