A Victory for our Great Outdoors; Trump’s Disgraceful Attacks on our Air, Land and Water; and PFAS and COVID.

Welcome to the June 18th edition of Three Things Thursday.  I hope this message finds each and every one of you safe and healthy.

Now, onto this week’s Three Things….

1.Big WIN for our parks, public lands and outdoor recreation!

The Great American Outdoors Act, which provides full AND permanent funding for the Land and Water Conservation Fund, passed the U.S. Senate by a huge bipartisan margin (73-25) yesterday.  This is the culmination of years of work and it’s a critical step in the process to getting this important legislation signed into law.

Our Senior Partnerships Manager Bentley Johnson has been leading the effort at Michigan LCV, meeting with our Congressional Delegation to express the importance of this legislation for our public lands, outdoors and parks. I’m so proud of our team’s work, which has been recognized in many ways, including a shoutout on Twitter from U.S. Rep. Haley Stevens during a recent virtual meeting where our team was advocating for passage of the legislation. 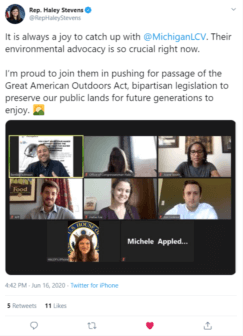 (Clockwise from the upper lefthand corner you see Bentley, Rep. Stevens’ staff member, and then other members of the MLCV team–Joané Booth, Joe Fedewa, Hallie Fox and Kiff Hamp–along with the Congresswoman. Go MLCV team!)

I want to thank all of you who used our online action to send a message to our Congressional Delegation. And, I want to extend a HUGE “thank you” to U.S. Senators Debbie Stabenow and Gary Peters for being true advocates on this important initiative.

Every week it seems President Trump hits an all-time new low. You better believe that the Conservation Voters Movement is doing everything we can to make sure he does not get away with it.

This week, the LCV Victory Fund launched another wave of digital ads and direct mail focused on Trump’s record on public health and his attacks on clean air and water protections.

This is all part of the LCV Victory Fund’s ongoing $14 million anti-Trump campaign targeting “envrionmental swing voters”. Since the start of the paid media campaign last month, the ads have had tens of millions of impressions on various digital platforms, including Facebook, YouTube, and Hulu across six battleground states.

3. PFAS: will Oscoda ever be cleared up? And…health links to Covid-19?

Over the past many years, we have been supporting activists and organizations in Oscoda as they work to hold the U.S. Air Force accountable for cleanup of toxic PFAS contamination stemming from the Wurtsmith Air Force Base.

On Friday, Air Force officials announced a short-term PFAS initiative for Oscoda, but they never bothered to talk to anyone in Oscoda about it. This was no surprise to residents there as this has been the Air Force’s modus operandi for years. Per usual this announcement raised more questions than answers in the northern Michigan community, which has been plagued by Air Force delays for more than a decade.

In their hastily issued press release, the Air Force announced plans to award a July contract to “expand capture fields” treating PFOA and PFOS near the highly contaminated Clark’s Marsh wildlife area and at another location on the former Wurtsmith Air Force Base. One look at the Air Force’s plans and long-time activists like Tony Spaniola and Cathy Wursterbarth immediately ascertained that the announcement lacked any and all specifics on timeline and cleanup. Given the Air Force’s track record of false promises, Tony and Cathy went to the press, which resulted in this MLive article, among stories in other publications, “Air Force plans new cleanup at Wurtsmith base, but questions remain.”

Cathay was also quoted in a Michigan Radio story saying, “It’s very vague and doesn’t give us any specifics.It was our work with Congress that provided the $13.5 million for Oscoda’s clean-up. And it’s our intention to make them accountable for cleaning up this in a way that will protect our children and our families.”

NOTE: As a reminder, due to citizen advocacy and the fine work of Michigan Senator Gary Peters and Congressman Dan Kildee, the Air Force received $13.5 million from Congress for PFAS activities in Oscoda.  It is imperative that the money be used to clean up the water and protect the health of the residents. This week’s announcement came out of the blue, with no involvement of the community or the State, and is seriously lacking in any detail related to real change in people’s lives.

You better believe that Tony, Cathy and Team Michigan LCV will be keeping a close eye on any and all next steps executed by the Air Force.

In other PFAS related news, the Centers for Disease Control (CDC)  issued an announcement this week recognizing the potential connection between PFAS contamination and Covid-19. The linkage between PFAS exposure and autoimmune issues is something we’ve been acutely aware of and have been highlighting through our People, Planet, Public Health Series and other communications.

The CDC’s statement includes, “we agree that this is an important question,” and “CDC recognizes that exposure to high levels of PFAS may impact the immune system. There is evidence from human and animal studies that PFAS exposure may reduce antibody responses to vaccines … and may reduce infectious disease resistance.”

The CDC then goes on to say, “because COVID19 is a new public health concern, there is still much we don’t know. More research is needed to understand how PFAS exposure may affect illness from Covid-19.”

My humble opinion? We’ve allowed thousands upon thousands of chemicals to be introduced into the market without adequate testing to prove they have no ill effects on human health and the environment.  This is pure and utter insanity.  We now know enough about PFAS to understand that this family of chemicals has been linked to cancer, liver damage, decreased fertility, increased risk of asthma and thyroid disease. PFAS has detrimental effects on our immune systems. Connection to Covid? You decide.

Thank you so much for your support of our work! Please stay safe!

P.S.  A quick tour of our virtual events

We’ve had so much fun hosting our People, Planet, Public Health webinars, which have included a broad array of special guests addressing numerous issues that are impacting the everyday lives of Michiganders.

Our Digital Communications Manager, Molly Leebove produced a re-cap video with highlights from a number of our webinars over the past couple of months. Congressman Kildee, Lt. Gov. Gilchrist, Sec. of State Benson, amazing frontline activists…take a minute and watch this powerful video. (While Lt. Gov Gilchrist delivers a powerful message about why elections matter, his baby daughter makes sounds of delight in the background, bringing a smile to my face.)

On June 24th, we have our second voter registration virtual couch party! As in round one, we will have live DJs, as well as guest artists from the Detroit area. We are inviting  new and returning participants to educate and inform them on how to sign up to vote at home!  You can register for the event via Zoom here. And please spread the word!

As many of you may know, I have the privilege of sitting on national LCV Education Fund’s Board of Directors. The board met yesterday via Zoom in advance of their big annual DC dinner, which this year was turned into a virtual event. In advance of the event, the board had the privilege of hearing directly from Speaker Pelosi and Vice President Biden.  The event, itself, featured the VP Biden, former Congresswoman Donna Edwards (now an LCV Board member) and Reverend Lennox Yearwood, President and founder of the Hip Hop Caucus, as well as national LCV Board Member. 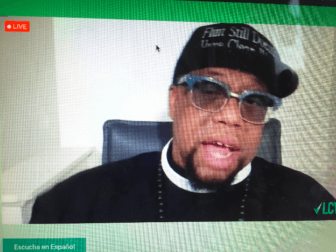 Many of you may remember that Rev. Yearwood was a keynote speaker at our Detroit gala a few years ago. Well, let me tell you, Rev. Yearwood did an amazing job with the final words at the national LCV event yesterday, linking racial justice seamlessly to water and climate justice, with his “Flint Still Does Not Have Clean Water” hat on.