Welcome to the June 10, 2021 edition of Three Things Thursday! There’s been a lot in the news this week about the environment. The headlines included the announcement that the Keystone XL pipeline (carrying tar sands oil from Alberta, Canada) won’t be built; the mass arrests by Minnesota police at the large protest against Enbridge and their Line 3 pipeline; and, Governor Whitmer’s announcement today that the state will use $250 million from President Biden’s American Rescue Plan to invest in state parks and trails, modernizing our state parks, fixing dilapidated trails and boosting Michigan’s tourism industry. Underlying this decision is not only support of our state’s beautiful outdoors, but putting people back to work and supporting our economy as we recover from COVID-19. The bottom line? All of this is directly connected to the voices and actions of concerned citizens/residents.

“Never doubt that a small group of thoughtful committed citizens can change the world; indeed, it’s the only thing that ever has.” ~ Margaret Mead

Our work every single day is to protect the health and safety of people and the planet, understanding that it is the power of the people that is essential to achieving our collective goals.

Now, onto this week’s Three Things, which looks at important climate action at the federal, state and local levels; the continuation of our amazing webinar series—People, Planet, Public Health; and the latest on Line 5 (great new TV/radio ads!).

Much of Michigan LCV’s work in recent months has been focused on catalyzing action on both the state and federal level to protect drinking water and address the climate crisis. Our aptly named Protect Our Water-Change the Climate initiative is centered around building support for President Biden’s American Jobs Plan, a $2 trillion plan that focuses, in large part, on infrastructure (lead pipes, failing bridges, roads, broadband) and clean energy investments that will put the U.S. on track towards carbon neutrality.  This bold, visionary plan would not only provide the help our communities need to recover from a global pandemic, but a much-needed investment in all the underpinnings of our great nation.

Although talks between President Biden and Senate Republicans broke down in Washington this week ahead of the President’s trip to Europe, there is still strong bipartisan support for the Plan and the Biden administration and key environmental champions in Congress are deeply committed to getting it across the finish line. For more on this, please check out the Michigan LCV Washington Weekly.

Here in Michigan, one of the cities leading the charge in tackling the climate crisis has been Ann Arbor. Last week, WEMU’s News Director/Host of “Morning Edition” David Fair and I had a chance to interview Ann Arbor’s Sustainability and Innovations Manager Missy Stults for the June installment of the 1st Friday Focus on the Environment radio show  (which I co-host with David).  Our conversation centered around Ann Arbor’s “A2Zero Plan,” a climate action plan defined by the goal of city-wide carbon neutrality by 2030. One of the unique and very important aspects of the A2Zero Plan is the priority focus on Ann Arbor neighborhoods that are most impacted by the effects of our changing climate, which have also been the neighborhoods to receive the least amount of benefit from investments in clean energy and other climate strategies. The A2Zero Plan has a built-in emphasis to create tailored solutions that will benefit minority and low-income communities as Ann Arbor moves towards net zero carbon emissions.

Another exciting local initiative is (continuing to) take place in Ypsilanti.  Thanks to Dave Strenski and SolarYpsi, Ypsilanti is now one of the most solar friendly cities in the state. Just last week, Strenski and a fleet of volunteers installed 57 solar panels on the bathhouse roof of Ypsilanti’s only public pool–Rutherford Pool. Named after the first African American representative on the state of Michigan’s Recreation and Parks Association –Jesse Rutherford — the pool has always been a community gem. This new solar installation is not only an excellent addition to an important and beloved city facility, but a shining public example of how beneficial investing in clean solar energy can be! 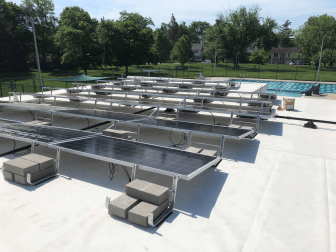 The rooftop of Rutherford Pool in Ypsilanti, MI

The timing of Ypsi solar installation could not have been better given the summer sunshine and important legislation in Lansing that, if passed, would expand the solar market in Michigan.  The Michigan LCV team is optimistically monitoring legislation that would lift state utility companies’ arbitrary 1% cap on distributed generation of solar energy. The cap, as it stands right now, only allows 1% of consumers to hook up to the energy grid and reap the benefits of installing solar energy on residential or commercial buildings. By raising the cap to at least 5%, our elected leaders in Lansing can take a critical step in encouraging solar installations while also helping reduce our state’s carbon emissions.

Stay tuned in the coming weeks as the Michigan LCV team continues to monitor action in Lansing, and check out the Capital Catch-Up for an in-depth look at the latest developments on important legislation in Michigan.

The webinar featured three fantastic guest speakers: Michigan Congresswoman Debbie Dingell (CD 12 – Dearborn); David Kieve, Director of Public Engagement for the White House Council on Environmental Quality; and Ryan ‘Rei’ Fielder, Manager for Michigan Alliance for Justice in Climate (MAJIC).  Each spoke about the American Jobs Plan, there was mention of the THRIVE Act and other important actions that address climate change, and what all this work in DC means for Michigan.

As you know, we established the People, Planet, Public Health webinar series in early 2020 as one of our many creative ways to virtually engage and interact with our members and supporters during COVID-19 . We’ve had members of Congress, activists, doctors, nurses, the Attorney General, the Secretary of State, and many others as special guests over the last year, and we are intent on continuing this important series in the days and months ahead.

In early July, we will be hosting our next People, Planet, Public Health event, which will focus on food access and sustainability featuring U.S. Senator Debbie Stabenow & other special guests. Make sure to stay tuned for registration information.

3. Line 5: A month after the shutdown deadline—New TV/Radio Ad

Almost a month ago, Enbridge Energy thumbed their nose at Governor Gretchen Whitmer and her demand that they shut down operations on the Line 5 oil and gas pipeline running through the Straits of Mackinac. As expected, given their egregious track record and consummate arrogance, Enbridge refused to comply with Gov. Whitmer’s order, continuing to pump oil and natural gas through their dangerously damaged pipeline and putting our Great Lakes at risk.

Since Gov. Whitmer announced that she was revoking the easement agreement between the State of Michigan and Enbridge, giving the Canadian oil company 180 days to cease operations on Line 5, the Michigan LCV and our partners have worked tirelessly to raise awareness and build support for the Governor, the Attorney General and their teams as they work to hold Enbridge Energy accountable.  Immediately in advance of the May 12 deadline, we hosted a Line 5 installment of our People, Planet, Public Health webinar, featuring Bay Mills Indian Community President Whitney Gravelle. President Gravelle recently wrote an article regarding the implications and dangers Line 5 presents for tribal nations in Michigan. You can check that out here.

In the last few weeks, there have been several important communications developments. Notably, in partnership with that National Wildlife Federation, we launched a TV/digital and radio ad campaign thanking the Governor for her leadership on Line 5 and strongly reiterating her call for a shut down. You can check out the video version here.  There’s a high profile voice narrating both ads. Let me know if you recognize it!

The NWF/Michigan LCV TV/digital/radio campaign comes on the tails of an effort in late May by two environmental and indigenous rights groups — Bold Alliance and the Indigenous Environmental Network — who also launched a TV and digital ad campaign entitled “Stop Trump Pipelines.”

The Michigan LCV team plans to mark Line 5’s 69th birthday this week through our continued and determined work to work to shut this ticking time bomb down for good. If you want to take action, I encourage you to contact President Biden whose message to Enbridge can be a simple one: the future of Line 5 lies in the state courts not the federal courts. The easement agreement signed with Enbridge 69+ years ago was signed by the state; the easement was then terminated by the state on May 12, 2021.  This is a state issue.

As always, thanks for all you do.  Be well. Be safe. Until next week…

On a personal note, early June is both hard and beautiful for me. It’s a time of memories, love, grief, and celebration all wrapped into one. You see, I lost my mom on June 4, 2018, the day after my amazing little 3-year-old neighbor’s birthday. In fact, she was born the day before my mom died in the very same hospital. They were there together…for one day. Life and death. Yin and Yang.

As the flowers of spring fade and the heat of summer arrives; as the state opens up even more in the transition out of COVID-19, and as people flood to watch Little League and the Tigers, and dive into community pools…it is my greatest hope that we can all take a moment to reflect on what we’ve lost and what we love, and find a kinder, gentler place within ourselves, understanding that whether within the pandemic or before, we all have holes in our heart that will be there forever. If we are intentional, we can open our hearts, embrace our loss and also fill every new day with love for people and places, understanding that life on this planet is precious and continues, in the wake of challenge and in the dance of hope and celebration.