Action in DC on PFAS, Civic Engagement Couch Parties and our joint fundraiser with the NWF Action Fund

Welcome to the July 9th edition of Three Things Thursday.  I hope this message finds each and every one of you safe and healthy. I also hope you had a restful 4th of July holiday.

Before I jump into this week’s Three Things, I have some breaking news:

As you may have seen, the US Supreme Court ruled today that much of the eastern half of Oklahoma is Native American land (for certain purposes). I’m incredibly proud to say that Michigan LCV Board member Riyaz Kanji delivered the compelling and extremely effective argument (from his living room!)  in front of the Supreme Court on behalf of the Muscogee (Creek) Nation and Native American sovereignty and rights in general.  Justice Gorsuch was the deciding vote on the 5-4 Supreme Court decision.  Riyaz is quoted in this article, which I encourage you to read.  Congratulations, Riyaz!

Now onto this week’s Three Things:

The past week has been full of small and big victories in Washington DC, many of those led by members of our Michigan Delegation.

As you may recall, a major source of PFAS contamination across the country, and here in Michigan, comes from military bases. In Michigan, one of the hotspots we’ve focused on is the Wurtsmith Air Force Base in Oscoda, where PFAS has seeped into the land surrounding the base, as well as water supplies.

Congresswoman Slotkin’s amendments do the following:

Other PFAS amendments added to the House NDAA would lead to regular testing for PFAS exposure during periodic health exams and include an assessment of whether those service members were stationed at a base “known or suspected for PFAS contamination”.

The Senate version of the NDAA includes more modest proposals for PFAS, but thanks to efforts by our Michigan Senators Stabenow and Peters (with Sen. Peters a member of the Armed Services Committee), there is bipartisan support for a drinking water standard for PFAS. Many amendments are still in the mix as the Senate was right in the middle of considering the bill before the July 4th recess.

As the House and Senate go back into session on July 20th, we should see this NDAA taken up for a vote in both chambers. We will keep you posted.

Also, the U.S. House of Representatives passed the Moving America Forward Act on July 1, which is aimed at addressing an array of infrastructure upgrades and repairs, including significant investments in drinking water and climate resilience.

The $1.5 trillion infrastructure package takes an innovative approach, with climate change resilience and environmental justice at the forefront, thanks in large part to Michigan members like Representatives Brenda Lawrence, Debbie Dingell, and Rashida Tlaib who rallied their colleagues to elevate equity, justice, and sustainability. The Moving Forward Act significantly increases funding for the Drinking Water and Clean Water State Revolving Funds — the main way federal money is passed along to states for water infrastructure. The package also includes massive investments in solar energy and storage to help us move more quickly toward clean energy infrastructure.

In one of the best demonstrations of Michigan’s leadership on #ourwater at the federal level, Representatives Rashida Tlaib, Dan Kildee, and Elissa Slotkin (with support from many others) were successful in adding an amendment that provides an additional $4.5 billion per year for five years to replace lead service lines across the country — and prioritizes environmental justice and low-income communities already dealing with major contamination.

Importantly, the Move America Forward Act also includes up to $1 billion in funding for water utilities to tackle PFAS contamination. Considering that the Senate Water Resources Development Act (which passed out of committee back in May) also contains funding to tackle PFAS (thanks to Michigan’s Senators Debbie Stabenow and Gary Peters!), it’s clear that our work alongside Michigan’s federal delegation is truly moving the ball forward to significantly clean up and protect our water from toxic contamination.

As we move more fully into the summer months and closer to the August 4th primary election, our civic engagement and voter registration work has been ramping up.

On Wednesday evening, we held our third civic engagement “couch party”, complete with live music from some of Detroit’s best DJs and artists. Our team has had a blast hosting these events through Zoom and Facebook Live to register Michiganders to vote and inform people about all of their new voting rights.

The event was hosted by our very own Civic Engagement Manager Olivia Bradley, with cameos appearances by our Wayne County Quality Control Coordinator Ashle Kelley and our Macomb County Regional Coordinator Rhonda Saxton. 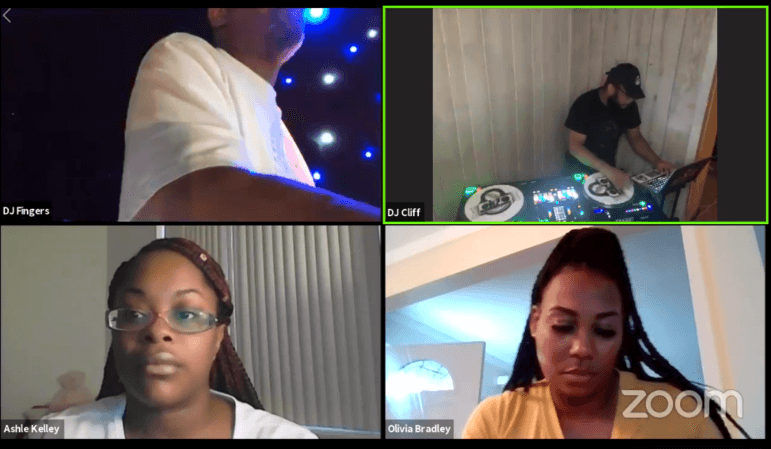 Neisha Nashae spoke passionately about how, as a Black woman, she feels like she has an obligation to vote because there was a time in our country when African Americans and women didn’t have that right. Neisha also shared some of her story about growing up in the foster care system and how that has shaped her view of the importance of voting as an essential vehicle to make change.

If you weren’t able to tune in on Wednesday, you can watch a recording of the event on our Facebook page here.

You can RSVP for our upcoming couch parties by visiting our events section of our website here!

While we all knew that 2020 would be a big year, none of us had any idea that it would fundamentally alter our lives, change the ways we live, work, recreate and vote. We also had no idea how powerfully and importantly the events of 2020 would bring to the fore the systemic racism and inequities in our society, from heightened health risks because of dirty air and the lack of access to the outdoors to the affordability of clean, safe water.

If elected officials don’t stand up to protect our air, land, and water, we put people, our wildlife and natural resources at risk.

In November, we have the immense opportunity to make our voices heard at the ballot box. With this important election in mind, we have teamed up with the National Wildlife Federation Action Fund for a joint event in support of our collective work to elect environmental champions, from both political parties, to reverse the current course of environmental/conservation history before it’s too late.

The special event will feature an outstanding lineup of speakers that you won’t want to miss, including:

There’s still time to join the Host Committee, be a sponsor and/or purchase your ticket! You can do so by clicking the link here.

I hope you’ll join us for this important event!

As always, enormous thanks for all you do to support our work.  Together, I am convinced we will put this state and nation back on track, tackling the racial injustices that permeate our nation and the existential threat that is climate change.

Be well. Be Safe.

We are not alone in the fight against Big Oil and the myriad of pipelines that threaten our land and water.  Indigenous people and environmental activists across the nation saw victories this week, which we see as a sign that momentum is building against the decades-long overreach by oil and gas companies, building fossil fuel infrastructure that is rapidly becoming obsolete through our pristine natural resources.

This past Sunday in Virginia and North Carolina, the planned Atlantic Coast natural gas pipeline, that would have run through the Appalachian Trail, was abandoned due to permitting delays and legal challenges.

And, on Monday, a federal judge ordered the Dakota Access Pipeline be emptied of oil by August and shut down for an environmental review, which could leave the pipeline out of operation for years.

The Dakota Access Pipeline victory hits home here in Michigan, as Enbridge Energy has more than a $1.5 billion investment in the Dakota line.

You can read more about these victories, and what Michigan LCV and our partners are saying about it in this Michigan Advance article.