Welcome to the July 30th edition of Three Things Thursday.  I hope this message finds each and every one of you safe and healthy. This week’s Three Things are a great example of why Michigan is at the epicenter of…..just about everything. What we do here on a host of issues impacts the rest of the nation.

We are the state that sits at the heart of the Great Lakes and the industrial midwest.  We are grappling with a long legacy of disproportionate air and water pollution on communities of color, the challenge of ensuring every single voter in the state can vote safely and securely (both next week and in November), and the role we play in evolving our energy infrastructure/addressing the climate crisis. How Michigan tackles all these issues is not only important for those of us who live here, but for people all across this nation.  I love Kevin Costner’s character in Field of Dreams, and I am a big believer in “if you build it, they will come”.  If Michigan leads, others will follow.

So, let’s dig into this week’s Three Things…

One thing that COVID-19 has brought clearly to the fore is that the racial disparity and environmental injustices facing communities in Michigan and across our country have cascading impacts on public health. Communities hit hardest by COVID are also communities living with high levels of toxins in the air and water created by industry and big polluters.

Members of the House Committee on Natural Resources are working to elevate this issue through a multi-state virtual tour, the focus of which is to promote the Environmental Justice for All Act.  An expansion of the Civil Rights Act, the Environmental Justice for All Act would give disenfranchised communities more power to hold polluters accountable and give impacted communities a bigger seat at the table on major decisions that affect them.

The first stop of this tour is, of course, Michigan. We could go through a litany of reasons for why Michigan was chosen, but I like to think one really important one is the leadership exhibited by Governor Gretchen Whitmer and Lt. Governor Garlin Gilchrist throughout the global pandemic, which has included the establishment of the Michigan Coronavirus Task Force on Racial Disparities–the only one of its kind in the nation.

There will be a virtual roundtable discussion today at 3:30 p.m. featuring:

If you are interested, you can watch it live here.

Please know, Michigan LCV enthusiastically signed on to a letter in support of the Environmental Justice for All Act. You can download a copy of that letter here.

(If you want an example of why this work matters so much, here’s a July 28th NYT article entitled, “Pollution is Killing Black Americans. This Community Fought Back”).

There are a ton of things to be worried about in the midst of a global pandemic.  Every time we step outside our homes, we worry about the health and safety of ourselves and our loved ones.  While this is certainly top of mind for me every day, I have to tell you that’s not what keeps me up at night. What has me gravely, gravely concerned is the list of significant challenges to our elections due to COVID-19.

One would think that the fiasco of this year’s Wisconsin and Georgia elections, coupled with the uncertainty about COVID’s trajectory, would compel lawmakers to do everything possible to reassure voters across the nation that they will be able to cast their votes safely and that all voting options will be easily and readily available (vote at home, drop boxes, in-person polling locations, etc.)

Unfortunately, that is not the case.

A tweet from President Trump this morning solidifies how high the stakes are. Indeed, the leader of the free world continued his fear mongering and false claims about voting by mail, and went as far as to call for DELAYING this year’s election. A dread that many of us have had is beginning to come to fruition: the President of the United States is positioning himself to not only question the efficacy of the elections, but contest the outcome of the election if and when he loses.

Fortunately, there are leaders who understand how dangerous and damaging Trump’s commentary is and are stepping forward to make their voices heard. Governor Whitmer, as example, quickly fired back at the president this morning, stating

“It’s clear that the president is more focused on his chances in the 2020 election than on protecting families from a virus that has killed more than 150,000 Americans,” said Governor Whitmer. “The truth is that mail-in absentee voting is safe, simple, and patriotic – so much so that the president and more than a dozen of his closest advisors have done it. If we could hold an election in 1864 in the midst of a Civil War threatening to tear our country apart, we can and will hold one in 2020. It’s time for the president to get his priorities straight and work with Congress on a bipartisan recovery package that protects our families, frontline workers, and small business owners.”

And, we have the gift of a final letter from the Honorable John Lewis, published today at his request, the day of his funeral.  Congressman Lewis writes,

“Ordinary people with extraordinary vision can redeem the soul of America by getting in what I call good trouble, necessary trouble. Voting and participating in the democratic process are key. The vote is the most powerful nonviolent change agent you have in a democratic society. You must use it because it is not guaranteed. You can lose it.”

Despite these strong and vital voices working to protect our democracy and our elections system, some in the Michigan Legislature are following the President’s destructive lead.

On Wednesday, the Michigan Senate Elections Committee extended an invitation to Secretary of State Jocelyn Benson under the auspices of having a number of questions related to the implementation of the 2018 Promote the Vote ballot initiative. Chaired by Senator Ruth Johnson (formerly Secretary of State, 2010-18), the committee meeting was, instead, an airing of grievances focused on Secretary of State Benson’s decision to mail out vote at home applications to all Michigan voters.

Given the unprecedented challenges to voting this year, it is of paramount importance that Michiganders are fully informed about the various ways they can cast their vote – including vote by mail. Secretary of State Benson’s work to increase access for Michigan voters, and ensure voters are physically safe when they cast their ballots, is to be commended, celebrated and supported, not questioned nor condemned.

Michiganders must understand that Senator Johnson’s criticism is rooted not in fact, but rather in widely disproven conspiracy theories over voter fraud from absentee voting, many of the same arguments used by President Trump to stifle voter access and action.

Instead of grilling Secretary of State Benson about her efforts to increase access to the ballot, the Senate Elections Committee should be rolling up their sleeves to ensure fair, safe and equitable access to voting. One simple, but immensely important thing they could do is pass legislation that was introduced in January by Senator Johnson, herself, which would allow for pre-processing of absentee ballots. This would be a huge step in alleviating  pressure from what is expected to be an extremely high number of absentee ballots this election, allowing for timely election results.  Remarkably, this commonsense fix has seen absolutely no movement in the legislature since introduction… and, now, we are less than a week away from the August 4th Primary.

We issued this statement following the hearing. You can read that here.

This all highlights why the work we are doing on civic engagement is so important.

The Michigan Legislature was off to a slow start this year, but in recent week’s they’ve taken up a lot of our issues, clean energy included.

One of our priorities is Senate Bill 597, legislation aimed at promoting the use of rooftop solar energy to help Michiganders save money on their energy bills and reduce pollution in our air and water.

Senate Bill 597 was originally introduced to lift the cap, but over the last week the bill was completely hijacked, with several bad amendments introduced that would maintain that cap AND implement a new compensation mechanism, basically making it less rewarding to install solar.

As you can imagine, our Government Affairs team has been all over this.  In response, the House Energy Committee adopted a substitute for the original bill, maintaining the arbitrary cap of 1% on rooftop solar and moving it incrementally to a 2% cap in 2023.  This substitute does nothing to solve the long-term problem, and it could become immediately problematic because several Michigan utilities will hit the 1% cap before it is increased in 2023.

At a time when COVID-19 is putting extreme pressure on our economy, we should be doing everything we can to promote and support our burgeoning clean energy industry. We should also be doing everything we can to reduce pollution (see Thing #1 above) and we can do just that through more extensive solar energy in Michigan.  The legislature clearly has their heads in the sand on this issue.  If you want to make your voice heard, I invite you to send a message to your lawmaker. They really do need to hear from all us: lift the cap on rooftop solar in Michigan! 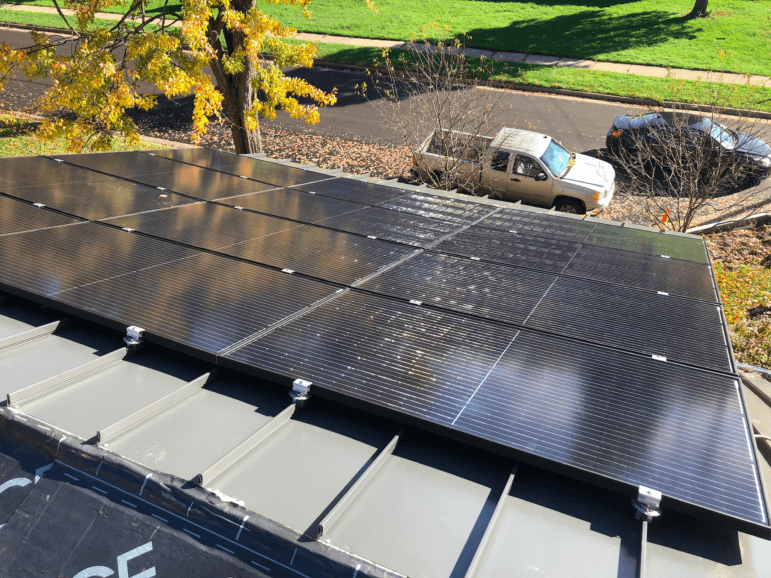 A view of my roof during solar installation last fall, with big shout outs to Solar Ypsi!

In other energy news, our board member Bali Kumar was featured in an excellent video by Climate Power 2020 talking about why he supports taking action on climate change and how we can bolster the clean energy jobs of the future while doing so! You can watch that video here.

As always, thanks for your belief in our work. Please cast your vote on or before the August 4th election.  Your vote matters a lot and–YES–you can vote safely and securely in the great state of Michigan!

Be well. Be safe.