Welcome to the July 29, 2021 edition of Three Things Thursday!

Before jumping into this week’s edition, I want to share a personal story about how I spent my day today (which will explain why you are receiving  Three Things Thursday in the evening!). I also want to acknowledge the passing of Senator Carl Levin, Michigan’s longest serving U.S. Senator who died today at age 87.

Senator Levin was a giant in the Senate, serving as chairman of powerful committees, and fighting hard for things that Michiganders hold near-and-dear to our hearts.  Among the many things he championed in his 36 years in the Senate, the Great Lakes and our amazing natural resources were at the top of Levin’s list. As captured by the Detroit News this evening:

“What folks might not know is his great passion for our natural resources and our parks in Michigan,” Stabenow said. “He was a lifelong passionate citizen of Michigan and loved to be in the outdoors.”

When the Senate wasn’t in session, Levin could often be found at the cottage he and his brother had “out in the woods,” Stabenow said.

Levin wrote the Great Lakes Critical Programs Act, which birthed new standards of environmental protection for the lakes, and later measures to clean up contaminated waters and sediments.

Michigan LCV had a chance to honor Senator Levin in 2014 when he retired from public service.  It was an evening I’ll never forget. 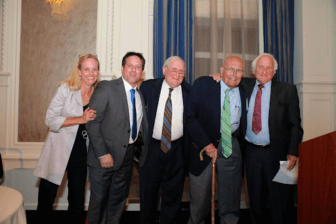 May you rest in peace, dear Senator.

Today, I had the opportunity to spend time with an amazing Michigan LCV board member — Phil Roos — and an amazing former Michigan LCV board member — Jerry Jung– hiking through a beautiful tract of land in mid-Michigan. We were joined by David Ewert, who is a senior conservation scientist at the American Bird Conservancy and Leanne Chadwick from NWF, as well as two Costa Rican Americans connected to Jerry.

It was hot and sticky, but we loved every minute of it. Dave helped us see birds we never would have seen on our own, including Bobolinks, Red-eyed Vireos, American Redstarts, Chestnut-sided Warblers, and many, many others.

We talked about the importance of land stewardship, especially at a time when our planet is overrun with toxins and pesticides, and reeling from the impacts of climate change. The work that Jerry is doing to protect and preserve this tract of land was evident by the monarch butterflies that, while enormously diminished in number throughout the nation due to neonicotinoids, still made frequent appearances during our hike. 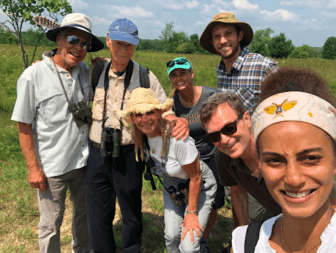 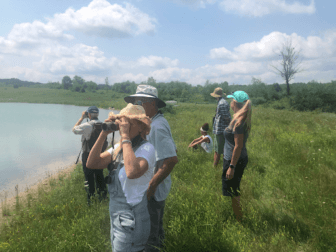 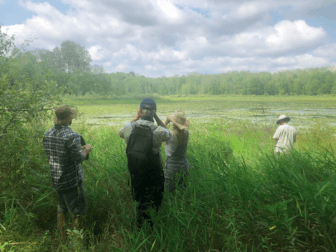 A chance to spend time admiring the beauty of this state, in a place I don’t often travel, with people I don’t often see (due to both COVID and schedules) was a real pleasure. My heart is filled with gratitude.

Now, on to this week’s edition of Three Things Thursday, which focuses on the power of stories and storytelling, and why the Michigan LCV team has been intensely focused on identifying storytellers, capturing stories, and lifting up the stories of real people all across Michigan. Today, I take a look at stories from our ongoing Green Champions Walks, our work on direct voter contact with our 313 Votes canvassers in Detroit, and our door-knocking in Dearborn for mayoral candidate/former Michigan LCV board member/state Representative Abdullah Hammoud. Let’s jump in!

1. Our “Champion Summer of Action”

As I mentioned in last week’s Three Things, this summer marks Michigan LCV’s first “Champion Summer of Action,” which is basically door-to-door canvassing with dedicated “green champions” in the state legislature. Our team has been out in multiple districts, talking with voters face-to-face, and hearing about the issues that matter most to them. Here are just a few examples of the kinds of interactions we’ve had, which we captured while knocking doors with Representative Nate Shannon (HD-25) and his team in Sterling Heights:

Almost all the people we spoke with expressed heartfelt thanks and appreciation for Rep. Shannon’s tireless work on behalf of the voters in the 25th state House district, and everyone was grateful for the opportunity to discuss the issues — not polarizing politics! — and to do so outside the frenzy of election season.

Speaking of elections, there are some municipalities in Michigan that have elections this year, including the city of Detroit. As we approach primary election day on August 3rd, our Democracy For All team has been spearheading a 313 Votes canvassing operation, which includes direct voter contact and education ahead of Election Day. 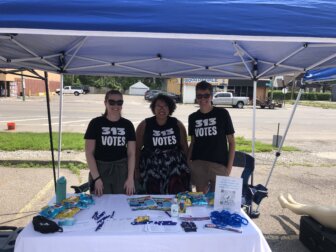 Our 313 Votes canvassing team is dedicated to making sure Detroit voters are aware of all the options when it comes to casting their ballots. As we’ve done our work, a number of conversations have been truly memorable. From residents sharing details of their lifelong participation in the democratic process, to elderly voters being made aware of absentee and early voting options, to first-time voters getting an overall understanding of the voting process, our 313 Votes team is making a big difference when it comes to getting Detroit voters out to the polls before and on August 3rd.

During a phone conversation, one of our canvassers made a connection and a difference. After answering the phone, Ms. Williams told our teammate that she had no idea that there was a primary coming up next week. Ms. Williams, who is 75 years old and not as mobile as she used to be, was extremely grateful that our team flagged the election for her, as well as the options available to her when going to cast her ballot. After talking with our teammate, understanding the context of the upcoming primary and the importance of making her voice heard, Ms. Williams made a plan to vote and told our team that she planned to have her grandson take her to the polls next Tuesday to cast her ballot.

Without personal contact and solid information on the voting process, people like Ms. Williams are unlikely to vote. I am so proud of our Democracy For All team and our 313 Votes canvassers for their commitment and hard work to ensure that voters know their options and their rights, and engage consistently in our democratic process.

On a related note, next week the Democracy For All team will be debuting a new bi-weekly newsletter, The Democracy Drumbeat, which will be a pivotal resource re: voting rights, voter education, and Michigan’s ongoing redistricting process. Be on the lookout for the first issue early next week!

As the August 3rd primary approaches, one of our key areas of focus has been Dearborn’s mayoral election because former Michigan LCV board member/state Representative Abdullah Hammoud is a candidate in that race.

When Abdullah announced his candidacy, Michigan LCV proudly endorsed him and our team has been working hard via canvassing and phone banks to ensure his victory. (You can read Michigan LCV’s full statement on our endorsement of Abdullah here.)

Just as he did in his run for state representative, Abdullah is proudly running on his history, which is firmly embedded in Dearborn. A dedicated member of the community where he was born and raised, Abdullah understands the issues that matter most to city voters. Climate change, air and water pollution and the need to invest in infrastructure are all top of mind in Dearborn and certainly came rushing to the fore when Dearborn (along with Detroit) was hit with catastrophic rain and massive flooding in late June, destroying property and ruining residents’ basements and homes. In the immediate aftermath of the floods, Abdullah and his team sprang into action and organized a widespread and hugely successful volunteer cleanup effort, helping Dearborn residents clear flooded basements and get the support they needed as the community tried to recover from more than 6 inches of rain overnight.

Abdullah’s actions have not gone unnoticed by Dearborn voters as our team found during our recent voter engagement efforts.

During door-to-door canvassing for Abdullah last week, our team of volunteers heard directly from Dearborn residents about why they are supporting his candidacy. One voter told us that they believe Abdullah would be a “hands on” mayor, specifically pointing to the ways he mobilized his team of volunteers in the aftermath of the flooding. Another voter was extremely excited to learn we were canvassing for Abdullah, noting that they followed him on Instagram and really appreciated his leadership. In both cases, our volunteers were able to pivot off the voters’ excitement and enthusiasm about Abdullah and provide them with information and resources on the many ways to cast their vote, including how to vote early at their local clerk’s office.

In addition to being a valued former Michigan LCV board member, Abdullah has been a friend of mine for years. In 2013, my sons and I were invited to a Ramadan breaking-of-the-fast feast, which was memorable not just because of the amazing food, but because of the kindness Abdullah and his family offered us. I have no doubt that Abdullah will be an exceptional mayor for the city of Dearborn. Let’s get him across the finish line in August and November!

Thank you for all you do to support our work. Be well. Be safe. Mask up. We are not out of the woods yet….

P.S. Important Update on the Protection of Voting Rights 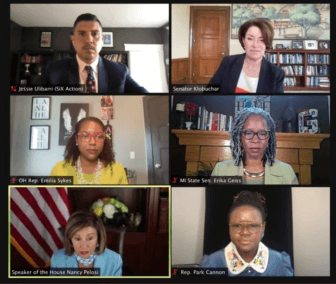 The lawmakers on today’s call clearly and directly urged Congress to pass the For the People Act and the John Lewis Voting Rights Advancement Act as Republican lawmakers across the country continue in their efforts to suppress voting rights with dangerous anti-voter bills.

As attempts to suppress our freedom to vote continue in Michigan, the Michigan LCV Democracy For All team, in partnership with pro-voter organizations from across the state, have organized three upcoming events to raise awareness and make sure that every Michigan voter continues to have the freedom to vote. Here are details on the three events starting next week:

All three events will focus on galvanizing support for voting rights in Michigan while standing in opposition to the continued attempts by Michigan Republicans to suppress voting rights. Be on the lookout for more information next week!