Welcome to the July 15, 2021 edition of Three Things Thursday! This week’s edition of Three Things covers a roundtable discussion with Vice President Kamala Harris and Sec. of State Jocelyn Benson; the launch of the Great Lakes PFAS Action Network (GLPAN); and why “building back better” must include critical measures to address the climate crisis. 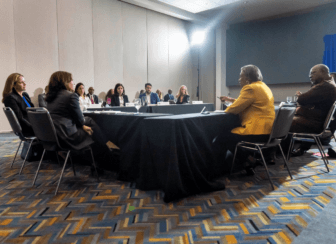 The Vice President visited Detroit’s TCF Center to talk about two top-tier issues: the importance of vaccinations as we continue to battle COVID-19, and protecting voting rights in Michigan in the face of continued attempts by Michigan Republicans to pass legislation that will suppress voting rights and access.

Despite clear validation at both the state and federal level that the 2020 elections were executed in a fair, equitable and accessible manner, a majority faction of the Republican Party continues The Big Lie, threatening the future of our democracy as dangerous, regressive legislation is proposed and adopted in an increasing number of states across the nation.

As Democratic lawmakers in Texas left the state to stop voter suppression legislation from being passed by their Republican colleagues –and Michigan legislators continue their work on a dangerous 39-bill package attacking the very essence of Proposal 2 (Promote the Vote) adopted in 2018 by 67% of Michigan voters–Monday’s event and the roundtable discussion was much appreciated and extraordinarily timely.

Many of the participants, including Sec. of State Benson, made sure to point out that we were convened in the very building where–on November 4, 2020 — an angry mob attempted to hinder and halt the absentee ballot counting board by storming the building and banging on the glass windows.

The Vice President asked the group a number of pointed questions, including, “What can we do to have voters feel like their vote really matters?” She then went on to provide examples of things that the Biden/Harris Administration has done to make a real difference in people’s lives, including passage of the expanded child tax credit, which is projected to lift millions of children out of poverty. In response to the Vice President’s questions, I had the opportunity to both thank the President and Vice President for their leadership and point out that, while the American Rescue Plan was an amazing and critically important federal action in the wake of a devastating global pandemic, the Michigan Republican-controlled legislature has been playing politics with the funding, holding billions of dollars at bay while Michigan communities continue to reel from COVID-19, damaging floods, and much more. The Lt. Governor, who had joined as an observer of the conversation, backed me up by saying, “Yes, $5.8 billion, to be exact.” The Vice President was aghast.

What’s next in the Michigan legislature re: voter suppression? Well, after the Michigan Senate passed three of the most dangerous bills in the 39-bill package (ones that focus on increased voter ID requirements), the House altered the legislation to include a signature matching requirement for all Michigan voters and sent the bills back to the Senate for consideration.

While the Senate is expected to remove the signature matching requirements introduced by the House, the bills remain dangerous, disproportionately impacting Michigan voters who might not have access to updated or state-issued IDs for a variety of reasons.

The Legislature returns to Lansing full-time in mid-August and we expect that these bills and others will pass along party lines. The Michigan LCV team and our coalition of partners are continuing to track any and all developments in Lansing, while also organizing  a number of in-person, pro-democracy events around the state.  It is clear that Governor Whitmer’s veto pen will not stop this outrageous attack on our right to vote. Republican leadership intends to  pursue a citizen-led ballot initiative once these dangerous bills ultimately die on Gov. Whitmer’s desk and we will need all-hands-on-deck in the days, weeks and months ahead.

2. The Debut of the Great Lakes PFAS Action Network

Today the Michigan LCV team participated in a virtual press conference to announce the launch of the Great Lakes PFAS Action Network (GLPAN). This newly created coalition is led by individuals and community groups that have been directly impacted by toxic PFAS contamination, and supported by key environmental partner organizations, including Michigan LCV, the Ecology Center, and the National Wildlife Federation

PFAS, or Poly- and perfluoroalkyl substances, are a class of thousands of chemicals that have been used for decades to produce products, like stain- and water-resistant fabrics, cleaning products, paints, and fire-fighting foams. PFAS chemicals are extremely toxic and take thousands of years to break down, thus their nickname: “forever chemicals.” As more and more of these chemicals have been used to manufacture products over the years, it has been discovered that they are carcinogens and can lead to an array of extremely serious health effects, both for human beings and wildlife.

Seeping into the land and groundwater in places like Oscoda, where PFAS chemicals were widely used in firefighting foam at the former Wurtsmith Air Force Base, PFAS has contaminated entire ecosystems and watersheds, making fish and wildlife toxic for human consumption and causing high rates of cancer in the surrounding communities. Similarly, the former Wolverine Worldwide tannery near the Belmont community in West Michigan has made the land and drinking water dangerous to those who live there. A dear friend of the Michigan LCV family, Sandy Wynn-Stelt, has become a vocal advocate for action on the state and federal levels to address PFAS contamination in a meaningful way that will protect Michigan families and her own community. When her husband died of cancer unexpectedly several years ago, Sandy went to work to elevate the dangers of PFAS contamination in drinking water that can devastate entire communities, like in Belmont. You can read more about Sandy’s story and her activism by checking out an interview our team recently added to our website here.

With more than 11,000 sites in Michigan contaminated with PFAS chemicals and more than 2 million Michiganders impacted by PFAS chemicals in their drinking water, the Michigan LCV team, along with our coalition of partner organizations, recognized the need to support the growing number of citizen activists who are stepping up in their individual communities. Together, we have helped establish an organization devoted solely to advocacy and action to address these dangerous “forever chemicals” led by the very people most impacted by the toxins.

I encourage you to check out the GLPAN website and sign up for email updates to stay informed about the latest developments as we work to address the PFAS crisis in our state. If you live in a community that is experiencing PFAS contamination and would like to get more involved with the GLPAN, please know we are looking for more impacted citizens to join the Leadership Team. You can email [email protected] if you’d like to represent your community as a part of GLPAN. The GLPAN website also has information on “Best Practices When Engaging with Impacted Communities” that offers some great guidance. Today’s press event announcing the GLPAN was amazing. I strongly encourage you to take a moment and check in out here.

3. Protect Our Water, Change the Climate: The stories of Michiganders & Why we must take climate action now

Given the extreme weather and catastrophic flooding that hit SE Michigan in recent weeks, it is clear now, more than ever, that we must take meaningful action to address the climate crisis and make critical infrastructure investments to protect the health and wellbeing of our communities.  The climate crisis is only continuing to accelerate, and communities in the Great Lakes region are taking notice, with both Great Lakes and St. Lawrence Seaway communities planning to spend $2 billion over the next five years in order to combat coastal damages resulting from the effects of climate change.

As the Michigan LCV team continues to work in concert with our national partners to get climate and infrastructure legislation passed in Washington, D.C., the flooding in and around Detroit serves as an unfortunately perfect example of why we must take action, and take action now.

During his visit to Northern Michigan over the Fourth of July holiday weekend, President Joe Biden heard from both Gov. Gretchen Whitmer and Detroit Mayor Mike Duggan about the latest climate-related disaster that has impacted thousands of Detroit residents and dumped more than 10 billion gallons of sewage into Michigan waterways.

Both Whitmer and Duggan expressed to President Biden the urgent need to invest in critical infrastructure in order to protect our communities against the accelerating effects of climate change. This is especially applicable to Detroit, Michigan’s largest city, which has not received major or meaningful infrastructure investments in more than three generations. The impacts of the climate crisis affect low-income and minority communities at wildly disproportionate levels. (NOTE: Just today, the Biden Administration announced approval of Gov. Whitmer’s request for a Disaster Declaration for Wayne and Washtenaw County following the flooding.)

“The Senate Finance Committee had been drafting tax provisions to help pay for the spending. They include a restructuring the international business tax code to tax overseas profits more heavily in an effort to discourage U.S. corporations from moving profits abroad. They would also collapse dozens of tax benefits aimed at energy companies — especially oil and gas firms — into three categories focused on renewable energy sources and energy efficiency.” – New York Times, July 14, 2021

As part of our work in the state/federal climate sector, one of our signature projects has been our Protect Our Water – Change the Climate Storybook.  To build support for comprehensive climate action and infrastructure investments, our team has been compiling stories from Michiganders all across the state who have experienced/been impacted by the climate crisis. I invite you to check them out on our Protect Our Water – Change the Climate webpage.

If you would like to share your own story, we are looking for more storytellers to add to our collection. Please contact our Creative Content Manager Samantha Schubert at [email protected] or our Communications Associate Zachariah Simón at [email protected].

As always, thank you so much for all you do to support our work. We couldn’t do any of this without you.  Until next week…

Months after Gov. Whitmer ordered Enbridge Energy to shut down their damaged Line 5 pipeline, the Canadian oil company continues to defy the Governor’s authority and trespass on Michigan land and bottom waters.

The response to Enbridge’s outrageous behavior has been loud and continuous, both in public demonstrations in Mackinaw City and Lansing, and in earned media communications. Just this week, Michigan LCV board member Noah Marshall-Rashid authored a fantastic opinion piece in the Holland Sentinel. Noah highlights Enbridge’s continued defiance of Gov. Whitmer’s authority and Michigan’s laws even as the company racks up millions of dollars in fines every day it continues operations on it’s “ticking time bomb” pipeline running through the Straits of Mackinac.

As a proud Michigan businessman and a resident of Northern Michigan, Noah understands the intimate connection between the health of the Great Lakes and the region’s reliance on tourism and summer vacationers being able to enjoy the amazing freshwater resources that surround and define our beautiful state.

I encourage you to take a minute to read Noah’s piece as the fight continues to shut down Line 5 once and for all.