Welcome to the January 12, 2023 edition of Three Things Thursday!

1. New leadership in the Michigan Legislature

This week marked the opening of the 102nd Michigan Legislature, and a number of Michigan LCV teammates were in attendance as several of our 2022 endorsed candidates and environmental champions were officially sworn into office. 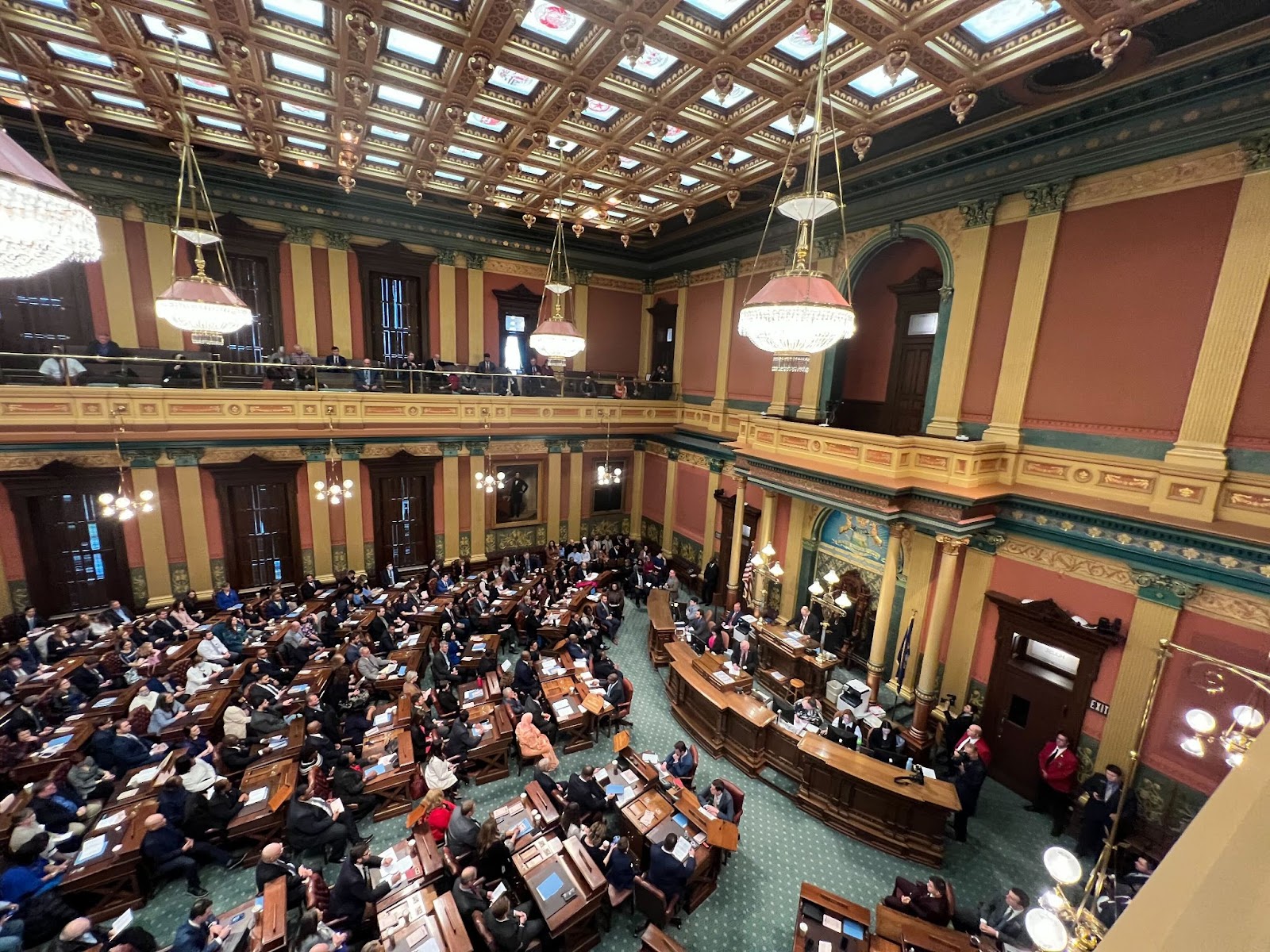 The Michigan House of Representatives from the gallery on Wednesday

Among the newly sworn in members of the legislature were Rep. Jenn Hill and Rep. Betsy Coffia, two brand new members from the Marquette and Traverse City areas who received a ton of Michigan LCV support and love during the election cycle.

Several Michigan LCV staff members were invited to bear witness to official swearing in ceremonies, and some of our teammates were even invited onto the floor, which is a great honor and a testament to the hard work we did in 2022. 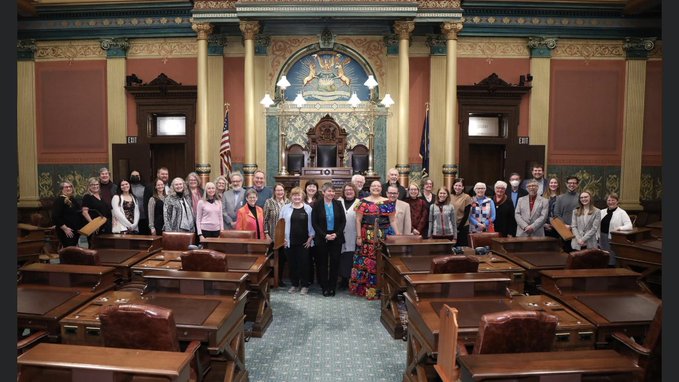 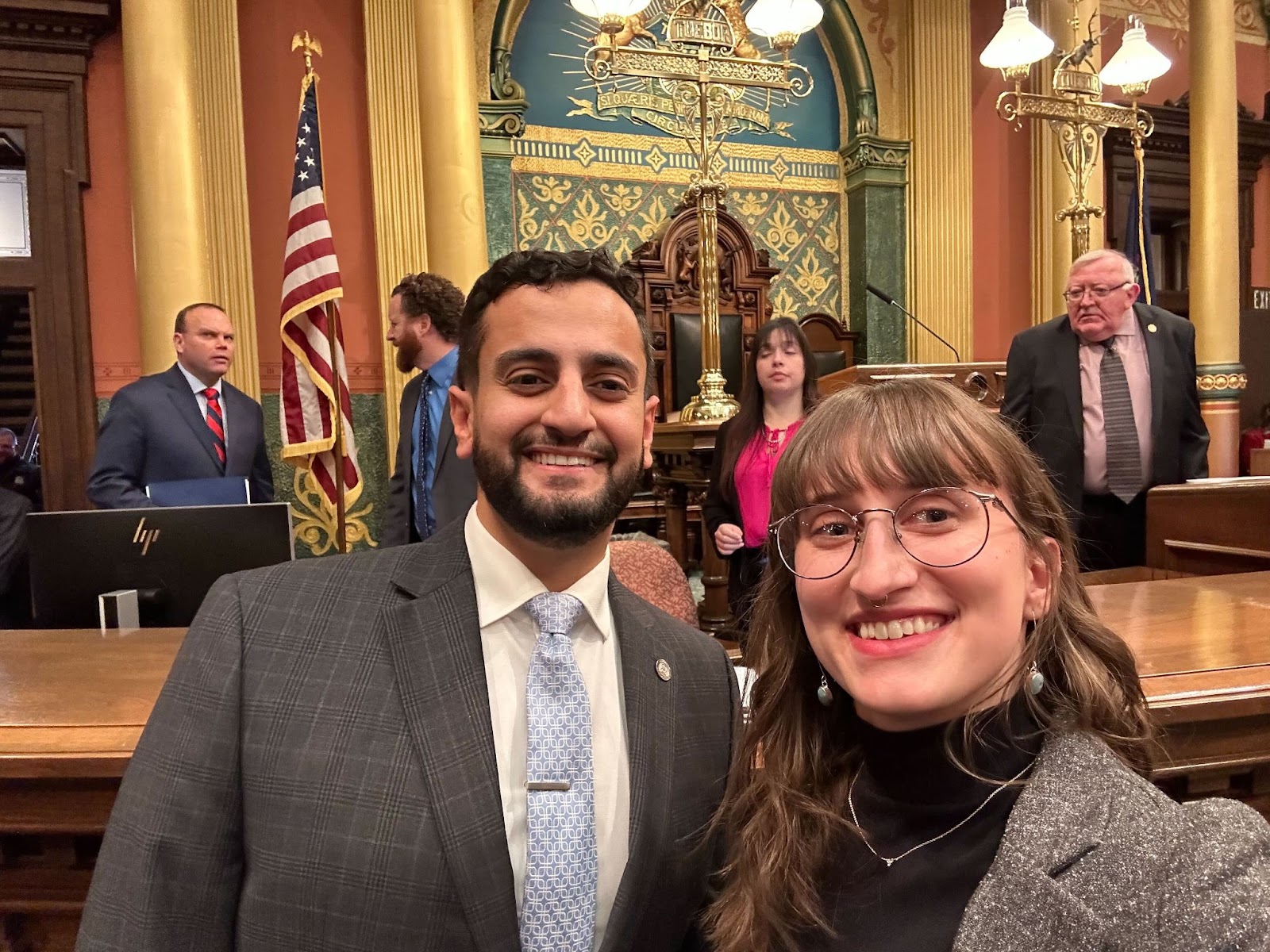 The opening of the 102nd Michigan Legislature brings with it an immense array of possibilities when it comes to making progress on the issues that matter most in Michigan. With a clean water/climate change majority for the first time in decades, we have a real chance to pass bills in Lansing that will create meaningful change for Michigan communities across the state.  For the Michigan LCV team that means ensuring that the tenants of climate/water justice are considered in every single decision, whether that be in relation to affordable housing, electric vehicles, energy siting and transmission, land use, or drinking water. We stand by our allies in frontline communities, like Theresa Landrum who recently authored an excellent piece in the Detroit Metro Times entitled: Michigan’s blue trifecta will be judged by progress on environmental justice. The subtitle reads: There are many urgent issues on the table, but none deserve more attention than the right to breathe clean air, drink clean water, and raise our children free from cancer-causing pollutants.

Amen.  More on this in the weeks to come.

Wednesday’s opening of the new legislature took place against the backdrop of recent revelations about DTE Energy’s political influence in Michigan.

Here is an excerpt from the Planet Detroit report:

Michigan Energy First’s three officers are DTE executives who work with an attorney, federal records show, and company executives have controlled the non-profit since it was created in 2014. Michigan Energy First has funded DTE allies in the state legislature, promoted the company’s interests on social media, funded community organizations whose leaders in turn support DTE in regulatory hearings, and financially backed or opposed political initiatives, like Unlock Michigan.”

Why would DTE Energy support the Unlock Michigan effort?

In a March 2022 investigative piece, ProPublica found that DTE Energy was shutting off service to tens of thousands of customers while it was funding efforts to stymie Governor Whitmer’s COVID orders, which included a moratorium on utility shut offs during the pandemic. Ironically, DTE also happened to be one of several utilities to receive hundreds of millions in COVID relief dollars from the federal government during the pandemic.

Michigan LCV released a statement this week shortly after the story broke.  Here’s part of what we said:

With this effort to stymie public health protections and undermine Governor Whitmer, DTE has officially reached a new low. Our new Legislature and the Michigan Public Service Commission must put DTE’s influence peddling tactics under a microscope because it has got to end,” said Bob Allison, deputy director for the Michigan League of Conservation Voters. “On a good day, DTE already has trouble keeping the lights on for its customers. Reliability problems and high costs are just what we’ve come to expect from this monopoly utility, and Michiganders are tired of their money influencing our politics.”

Michigan’s monopoly utility companies have been exerting undue influence in Lansing for far too long. We look forward to working with the new legislature to ensure that any energy policy that is passed puts people first and that a real, lasting spotlight is put on this dangerous, dark money spending.

3. Vice President Harris is speaking out clearly about climate change and environmental justice

I had the great honor of spending time with Vice President Kamala Harris not once, but two times this week. On Wednesday, I joined 50 state and national leaders from across the country for a moderated conversation on climate and environmental justice hosted by the Vice President at the White House (well, technically it was in the Old Executive Office Building). I was delighted to find myself in the company of at least one other Michigander (and there may have been others) — Donele Wilkins a long-standing environmental justice champion who runs the Green Door Initiative in Detroit– as well as my colleagues and fellow national LCV board members from South Carolina, New Mexico, Arizona, Colorado, Maryland, Virginia and DC. Vice President Harris provided opening remarks about the climate crisis and the administration’s deep commitment to addressing the challenge in an immediate and holistic manner. She celebrated the passage of the landmark Infrastructure bill and the Inflation Reduction Act, emphasizing that this is the largest commitment and investment that our nation has ever made to tackling the existential crisis of our time.  Madam Vice President also underscored that this is the most ambitious environmental justice agenda that any administration has ever had, stressing that “….we now need to take things from theory to practice”.

In a moderated Q&A to follow, Vice President Harris said that “we need a nation where people not only survive but thrive”.  She said that “…protecting this planet of ours demands exciting innovations, a new workforce with a spirit of determination that recognizes that all people are entitled to dignity, respect and a sense of equity”. In addition to the Vice President, we heard from John Podesta, Senior Advisor to the President on Clean Energy Innovation and Implementation;  Mitch Landrieu, Senior Advisor to the President and Infrastructure Coordinator; Brenda Mallory, 12th Chair of the Council on Environmental Quality; and Ali Zaidi, Assistant to the President and National Climate Advisor. Each of them shared their perspectives on the opportunities before us and the need for deep collaborative work– both horizontally and vertically — across federal, state and local units of government to ensure this historic investment in tackling climate change, rebuilding our aging infrastructure, protecting communities and providing good paying jobs is done as rapidly and in the most just and equitable manner possible.

Today’s event with the Vice President took place at the Rackham Auditorium in Ann Arbor on the University of Michigan campus.  I was fortunate to be invited to a meet and greet/photo opportunity with the Vice President before she took the stage.  As we exchanged greetings, I thanked the Vice President for her outstanding leadership and complimented her on the event at the White House. Her response? “I told you yesterday that my word for 2023 is ‘momentum’.  Did you see the announcement this week?” And of course I had: MLive reported that:

With cities now eligible for federal rebates on renewable energy installations, Ann Arbor is moving forward with an $11 million investment in solar arrays.

That includes arrays at the city’s airport, water and wastewater treatment plants and Wheeler Service Center.

The city also is planning a $3 million project to install solar arrays at city parks through local installer Homeland Solar.

Between the two solar projects and another $520,000 for battery storage, the city now expects to net over $3.5 million in additional federal funding via 30% rebates available to municipalities under the new Inflation Reduction Act.

“I’d like to thank the Biden-Harris administration for their vision with respect to the Inflation Reduction Act,” Mayor Christopher Taylor said, calling it a step forward for the city’s A2Zero initiative to achieve community-wide carbon-neutrality by 2030.

Mayor Taylor had a chance to thank the Vice President first hand and did so with glowing remarks from the podium, emphasizing that the federal funds available to the City of Ann Arbor are truly transformational and will allow the City to make great strides in meeting their bold climate goals.

In addition to Mayor Taylor, the crowd got to hear from an amazing student leader, Congresswoman Debbie Dingell, Senator Debbie Stabenow and Secretary of Energy Jennifer Granholm. (Remarks were also shared from UM President Santo Ono who unfortunately contracted COVID.)  Secretary Granholm was joined by Dr. Kyle Whyte, Professor of Environment and Sustainability, for an armchair conversation with the Vice President. As we all know, Michigan is experiencing the accelerating impacts of the climate crisis, from flooded homes and neighborhoods in SE Michigan, to flooded farm fields and dam collapses.  While these impacts are being felt in communities all across our state, minority and low-income communities are suffering exponentially, the same communities that have borne the brunt of environmental injustices for decades. The Biden/Harris Administration’s commitment to tackling the climate crisis and investing much needed resources in a  just and equitable manner has the potential to truly transform this nation. It is up to all of us to lean in and support this work.  As Mitch Landrieu emphasized on Wednesday, this has got to be one team, one mission.  While we no longer have a host of climate deniers trying to drag us down, we do have a bevy of obstructionists. Collectively, we must say “NO” to their attempts to stall and derail this work.  The time is now. As the Vice President said, we have ‘momentum….and nobody is going to be left behind!”

Thank you so much for all you do to support our work. Until next week….