Welcome to the December 8, 2022 edition of Three Things Thursday!

Before we get to this week’s Three Things, I want to highlight an opportunity to volunteer to protect the health of our democracy in Michigan. As I mentioned last week, petitions were filed by anti-democracy actors for a recount of more than 500 precincts for ballot Proposal 2 and Proposal 3, which Michigan voters overwhelmingly passed last month. While this recount will have zero impact on the outcomes of Proposals 2 and 3, bad actors jumped at the chance to continue election deniers’ years-long efforts to sow doubt and confusion about trusted election processes.

With the recount process underway this week, Michigan LCV Education Fund’s Democracy For All (DFA) team has been on the ground, observing the proceedings, most notably in Detroit. DFA director Clare Allenson has been working diligently to help observe, organize volunteer observers, ensuring that our democracy fully functions and that the recount goes as smoothly as it can given the circumstances.

With the process continuing into next week, we are actively looking for volunteer observers to join us in defending our democracy and the will of Michigan voters. If you are interested in serving as a volunteer observer, please contact Clare via email at [email protected] for more information.

Now, on to this week’s Three Things!

It’s been a busy week for the Michigan LCV team, particularly when it comes to our federally-focused climate action work in Washington, D.C.

Over the weekend, news broke that Democratic leadership was once again attempting to rally support for Senator Joe Manchin’s Big Oil permitting bill. Months after it was left out of the federal government’s omnibus spending bill, the Energy Independence and Security Act of 2022 was suddenly back on the table and all indications pointed to an attempt by leadership to attach it to the Water Resources Development Act and, subsequently, to the National Defense Authorization Act (NDAA).

Although we knew Manchin’s side deal was likely to have a resurgence, the timing was surprising. In short order, the Michigan LCV team sprang into action and began organizing a chorus of voices in opposition to Manchin’s bill, legislation that would have drastically scaled back environmental review processes and allowed for new, expedited projects that would have greatly benefited the fossil fuel industry and doubled down on our national dependence on dirty energy. After we organized and applied enough pressure in August to force the bill to be left off the table, we knew we could do it again. And we were right.

Thanks to the work of our federal government affairs team doing outreach to Michigan’s congressional delegation in tandem with Michiganders responding to our call to action to contact their lawmakers, leadership was forced to leave the bill out of the defense deal, marking a huge victory for frontline communities impacted by fossil fuel extraction and for the climate action movement.

The Michigan LCV team is immensely grateful for everyone who took action and helped achieve this result. While more work lies ahead in 2023 with a Republican-controlled House in Congress, we can be proud that we facilitated the second defeat of Manchin’s Big Oil side deal.

For additional analysis on how things played out on Capitol Hill, check out our federal government affairs team’s most recent blog, The Resurgence and Second Defeat of Manchin’s Big Oil Side Deal.

It’s Lame Duck season for the Michigan legislature, and the Michigan LCV team has been tracking the latest developments in Lansing as lawmakers bid farewell and legislation – some good, some bad – has been up for votes.

Contrary to what we expected pre-election, this year’s Lame Duck session has been far less eventful than in years past given that Democrats won majorities in both houses for the first time in decades and the current Republican majorities have been cooperating with our Democratic governor. Nonetheless, our state government affairs team doubled down in tracking proposed legislation and released a comprehensive overview of  Michigan LCV-prioritized bills. Here is a brief excerpt:

These bills, aimed at accelerating aggregate mining operations in Michigan, would remove local governments’ oversight over sand and gravel mining operations and would instead give the power to regulate to the Department of Environment, Great Lakes, and Energy.  The bills create a new regulatory structure for aggregate mining, but in their current form amount to a lot of bureaucratic review and little prescriptive environmental protection.

In their current form, the bills do not do enough to protect Michigan’s soil and remaining natural areas. The bills have passed the Senate and await House action.

In addition to legislative action, this week we saw farewell speeches from many outgoing lawmakers that were, to put it lightly, “interesting”. Outgoing Senate Majority Leader Mike Shirkey addressed his senate colleagues in a 35-minute speech during which he spouted far-right conspiracy theories. He once again attacked Gov. Whitmer over the COVID pandemic and said the pandemic was a “surprise foreign attack” that was “planned,” warned of threats of “one world governance,” and even admitted to sticking his hand in a Capitol toilet to check the water temperature. 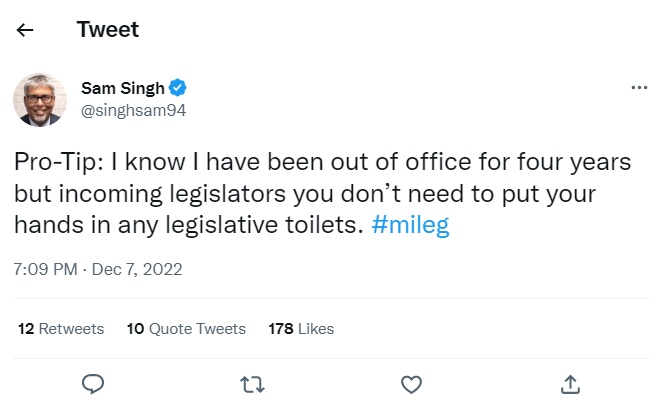 As the legislature wraps up work…and crazy floor speeches…before the holidays, the Michigan LCV team is looking forward to 2023. With pro-conservation/pro-democracy majorities in both houses, there are ample opportunities to make progress on a number of our priority issues, and we look forward to getting to work in the new year!

3. The threat of dioxane for Ann Arbor drinking water

Earlier this week, MLive reported that new testing in Ann Arbor Township showed unsafe levels of the dioxane in drinking water of homes more than a mile north of the Gelman plume boundary, with one sample showing contamination that exceeds the state standards for drinking water. With dioxane being a potential carcinogen, some residents have been advised to use bottled water. 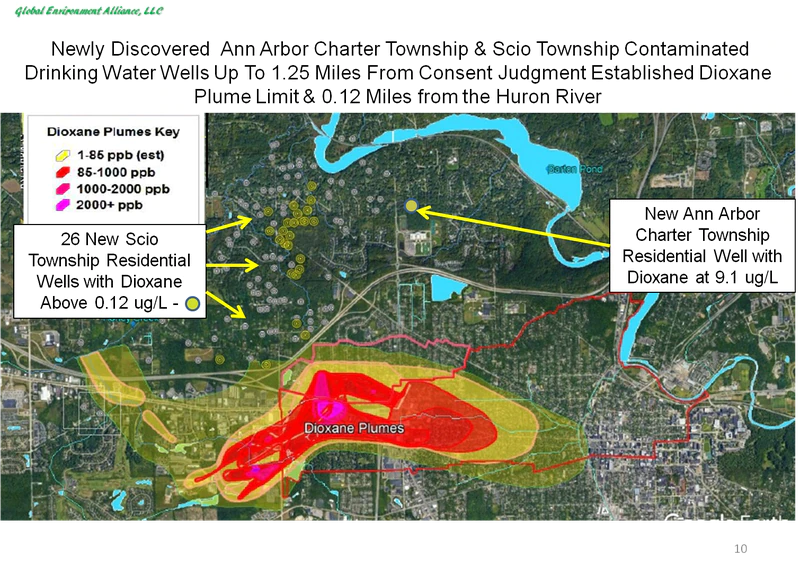 Underground contamination from the Gelman plume has been a concern for years, and these new findings suggest that contamination has spread beyond the known boundaries. While nearby Scio Township executed testing that revealed levels below the state drinking water standards, any level of toxic contamination like this is cause for concern. The testing results also underscore concerns over inadequate monitoring of the plume and raise fears of contamination of drinking water for even more residents in the area.

Moving into 2023, drinking water contamination and remediation, and the need for more stringent polluter pay laws, will be a top priority for the Michigan LCV team. As Michigan’s new, 102nd Legislature officially begins their work, I will be sure to keep you informed and updated on the latest efforts in Lansing and across the state.

As I say every week, thank you so much for your support and trust.  Until next week…