Welcome to the December 2, 2021 edition of Three Things Thursday! This week we focus on breaking news on Line 5, water and green infrastructure (read: a healthier, more sustainable Michigan), and the many ways to support Michigan LCV.

Before diving in, however, I must take a moment to acknowledge that this has been a terribly painful, challenging week. The Oxford High School shooting rampage, which took the lives of four students and injured seven others, including a teacher, has left Oakland County, SE Michigan, the state and the nation, as a whole, reeling. Our hearts go out to the families, friends, and extended Oxford High School community. It’s hard to believe that our country has done virtually nothing to address the sale of and access to guns decades after the Columbine massacre and three years after the horror in Parkland, Florida at Marjory Stoneman Douglas High School. My son, two of his friends and I drove to DC on March 24, 2018 for the March for Our Lives, which was one of the most powerful gatherings I’ve ever been a part of.  Young voices full of pain and determination filled the streets of our nation’s capital…and no one seems to have listened.

Earlier this week, a tragedy of a different sort hit the WEMU 89.1 FM community with the shocking loss of award winning journalist and All Things Considered radio host Lisa Barry.  Lisa was so dedicated to her work, delivering interesting interviews and local news, alongside national headlines.  Only weeks ago, Lisa donated her time as the emcee for the Ecology Center’s annual virtual event, doing a spectacular job for an important area organization. Our deepest sympathies go out to Lisa’s family and her family at WEMU.

Now, onto this week’s Three Things:

An important development in the fight to shut down Enbridge’s dirty, dangerous, damaged Line 5 pipeline occurred on Tuesday when Gov. Whitmer announced her decision to shift the state’s legal strategy to give Michigan state courts the final say in protecting the Great Lakes by voluntarily dismissing the State of Michigan’s lawsuit against the Canadian oil company in federal court.

The lawsuit, which was filed in November 2020 in Michigan state courts, has been at a standstill over much of the past year after being moved into federal courts as a result of Enbridge’s litigation efforts. The Whitmer administration announced the decision in a press release, which included a quote from Michigan LCV, with support from other partners and Attorney General Nessel

The Governor’s announcement on Tuesday is a strategic move to avoid tough legal odds in federal court. By dismissing her own federal lawsuit voluntarily, Governor Whitmer removes barriers for Michigan’s 30th Circuit Court (Judge James Jamo presiding) to move forward with Attorney General Dana Nessel’s lawsuit against Enbridge, which was filed in 2019.

Gov. Whitmer and Attorney General Nessel recognize the fact that the future of Line 5 should be decided by Michigan state courts and are moving purposefully to the next phase of the fight to protect the Great Lakes.

While Enbridge will undoubtedly attempt to move the Attorney General’s lawsuit to federal court, the window for that to happen has already passed and the Canadian oil company will be on weak ground in trying to do so.

As the fight continues, I urge you to visit our one-step advocacy tool which you can use to send a message to Gov. Whitmer voicing your support of her important decision and thanking her for her dedication to shutting down Line 5 once and for all.

As always, I will continue to update you all in future editions of Three Things as things progress. Stay tuned!

On Monday, our Government Affairs Director Nick Occhipinti and Legislative Aid Hallie Fox met with west Michigan lawmakers to tour existing and completed green infrastructure projects in and around Grand Rapids. The tour was an opportunity for our elected leaders and government officials to learn more about environmentally-conscious investments in Michigan’s infrastructure — specifically water infrastructure — ahead of appropriations deliberations around the American Rescue Plan, the Bipartisan Infrastructure deal passed last month, and (hopefully) the Build Back Better Act. 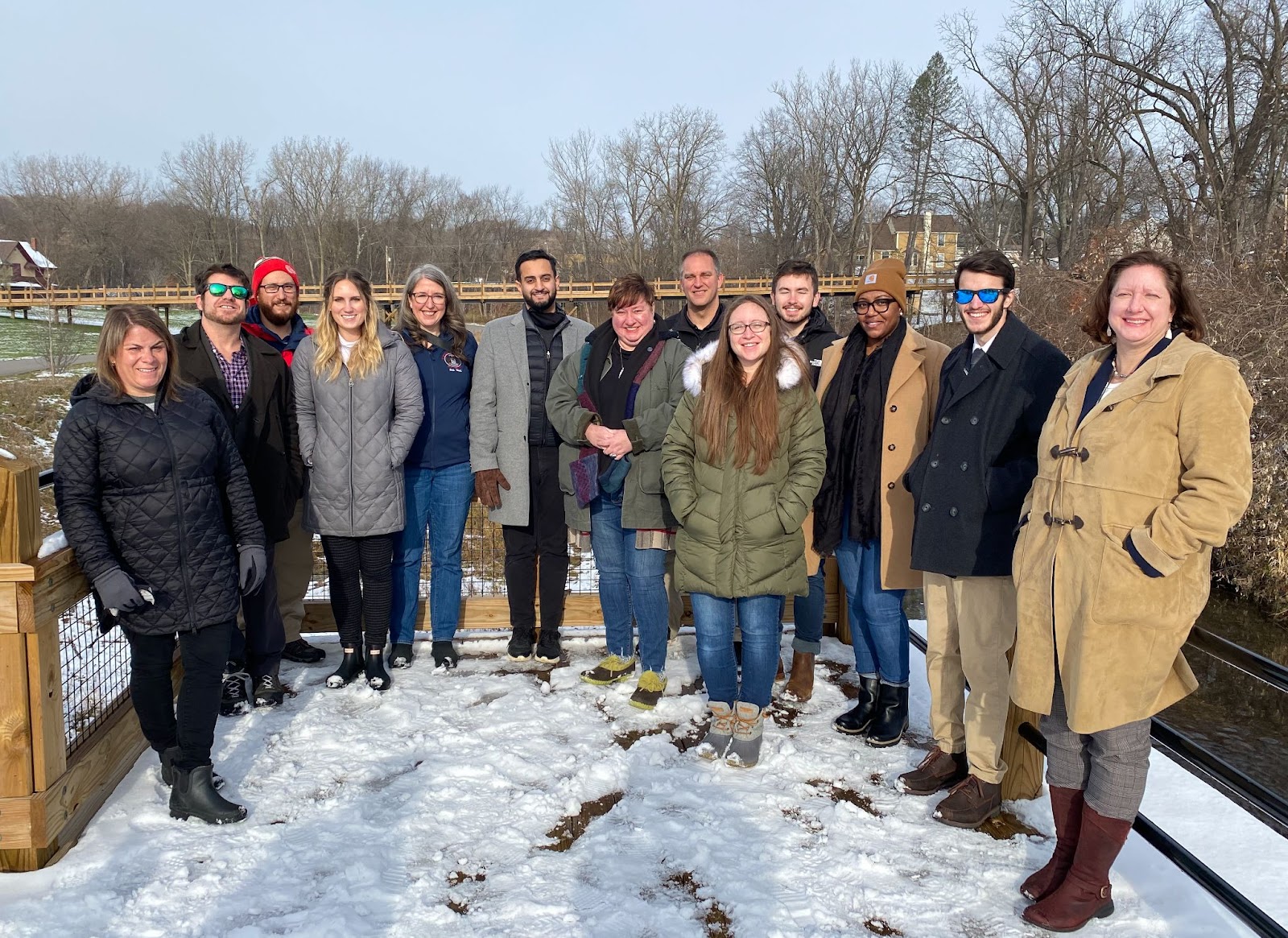 The tour covered communities in the Grand River watershed where innovative investments and projects have already begun to show the benefits of green infrastructure when applied to the protection of our water, public health, and the growth of our economy. These projects, including the restoration of watersheds, installation of more permeable concrete and asphalt, and planting of native plant and tree species, have made Grand Rapids and Kent County leaders in finding innovative ways to provide clean, safe drinking water and make communities more resilient given the accelerating impacts of the climate crisis.

Green infrastructure, in this context, refers to projects that utilize natural resources to accomplish critical climate goals and solve urban challenges by simply building with the natural environment. Instead of paving over naturally-absorbent land and natural areas in ways that might cause water to accumulate and cause dangerous flooding, for example, investing in green infrastructure alternatives allow rivers and streams to absorb increasingly heavy precipitation, improve the health of the watershed, and protect drinking water from contamination. These projects, including the installation of natural water boundaries and planting of native plant species, will be integral as we work to fortify the climate resilience of our communities, and will help absorb carbon dioxide in the process. On top of that, by investing in these types of projects, Michigan will create good-paying jobs and bolster our state’s economy as we continue to recover from the pandemic. 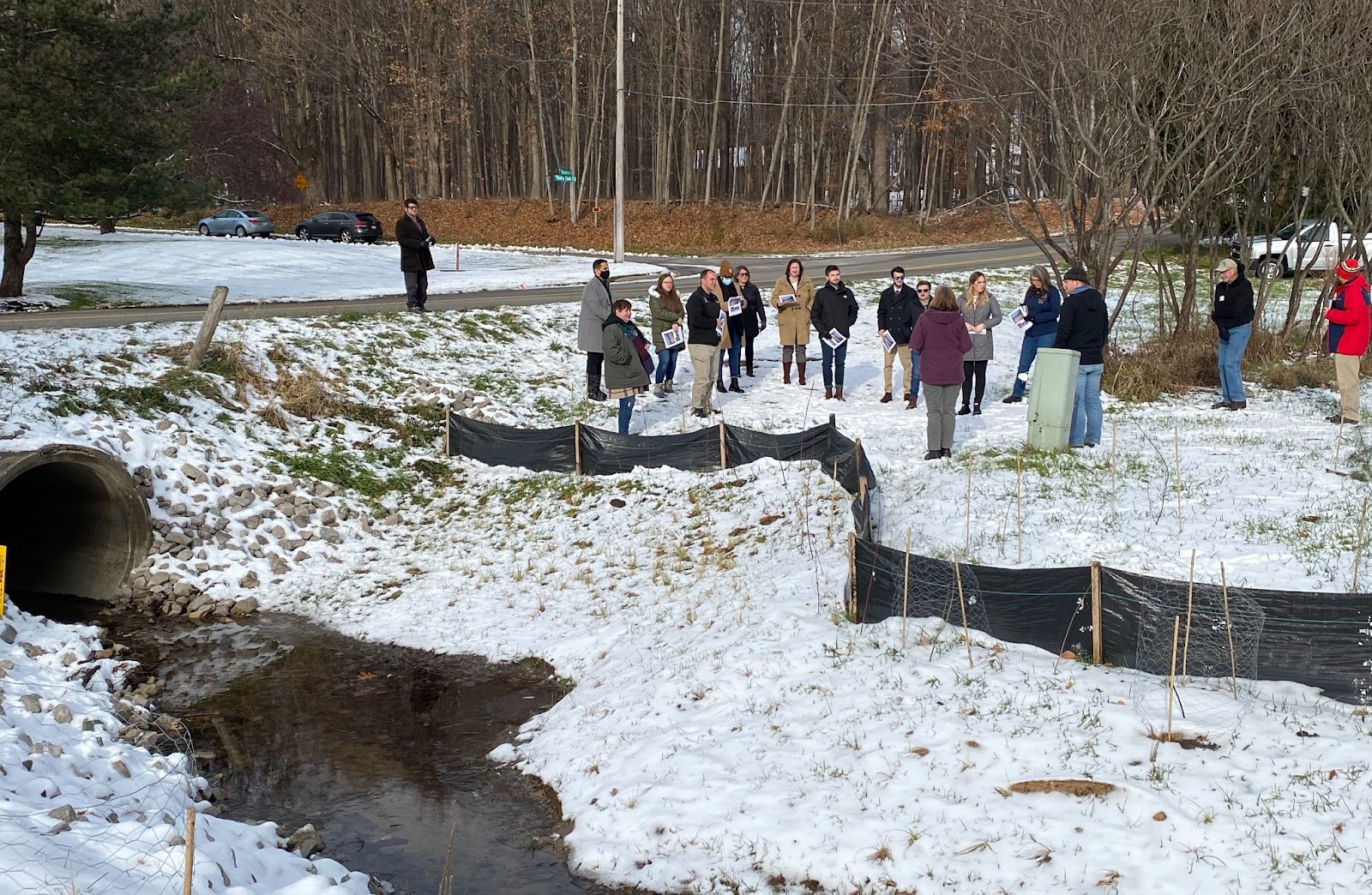 As noted in previous issues of Three Things, Michigan has access to over $10 billion in approved federal funding through the American Rescue Plan, and anticipates billions of dollars more made available through the Bipartisan Infrastructure Deal, that the State Legislature can allocate to important water-related priorities. The Michigan LCV team has worked diligently to create robust recommendations as to how these funds should be allocated. Our Fund MI Water Infrastructure Plan includes the allocation of funds for the removal of lead service lines and remediation of toxic PFAS contamination to protect drinking water and the health of our communities, as well as recommendations for projects related to green infrastructure, such as overhauling stormwater and drainage systems. which will help prevent catastrophic flooding events like those we saw in Metro Detroit earlier this summer. 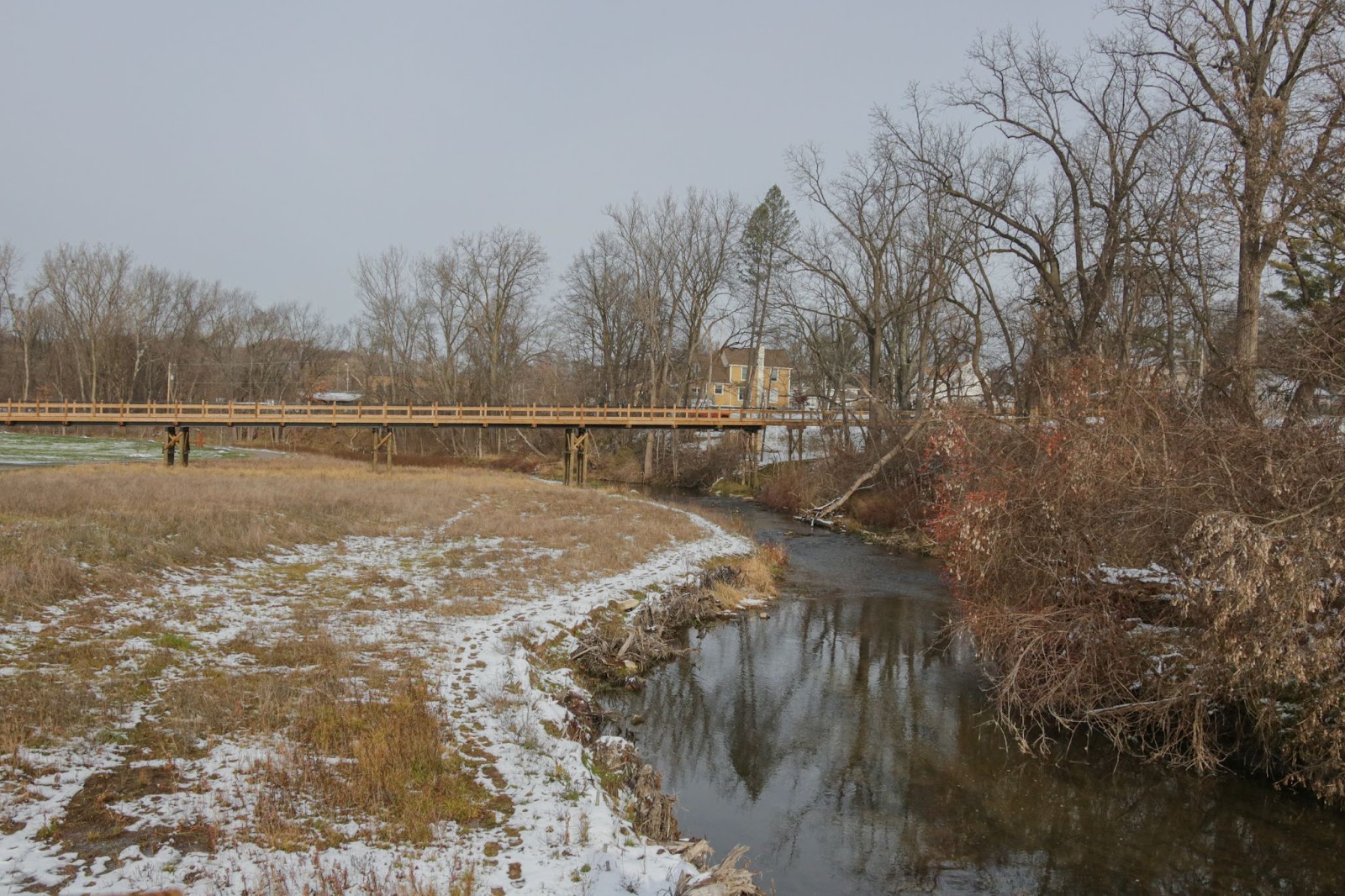 Despite recent inaction by lawmakers in Lansing to allocate the tens of billions of dollars already available to Michigan, this week the Michigan Senate unanimously passed Senate Bill 565, which includes $3.3 billion for investments in Michigan’s water and water infrastructure, which is a big step forward and significant improvement over earlier versions of the legislation.

Now that Senate Bill 565 has passed the Senate, the Michigan LCV team is continuing to work to make sure that this critical infrastructure funding legislation passes the House so we can address the public health and infrastructure threats facing Michigan communities.  I invite you to use our one-step advocacy tool, which provides all the information you need to urge your State Representative to take action and pass Senate Bill 565.  Getting this bill to the Governor’s desk is an important step forward in building a just and equitable future that centers on clean, accessible water and healthy communities.

This past Tuesday marked Giving Tuesday, an important day for non-profit organizations like Michigan LCV as the year draws to a close.

As a family of organizations, Michigan LCV Education Fund, Michigan LCV and our two political action committees rely on contributions and donations to do the work that we do, fighting for the protection of our land, air, water, public health, and democracy. Big or small, these contributions fuel our work in ways that go beyond just funding our teams and making sure we have the right people in the right places. These contributions fuel the internal fire our team uses as motivation to show up everyday and work for a better future.

In the middle of November, we hosted our annual Equity & the Environment awards gala, honoring five incredible local and state champions. The event, albeit virtual for the second year in a row, is one of the many tools we have to help raise much-needed funds for our work. If you missed this year’s gala, I highly encourage you to check out this amazing video, which provides a snapshot of the evening’s awardees and speakers.

I also urge you to check out our latest monthly recap video, which covers all of Michigan LCV’s work in the month of November. These fun video recaps help shine a spotlight on the work our teams do day-in-and-day-out on the issues that matter most to you!

As we enter the holiday season and the end of a tumultuous 2021, I would be honored and very grateful if you would consider making a donation to the Michigan LCV family of organizations.  This will help us continue the important work that we do into 2022 and beyond.

As I sign off, I urge you to hug your loved ones and tell them how much they mean to you.  Weeks like this one are a real reminder of how fleeting our time on this beautiful planet really is.

With deep appreciation for this beloved Michigan LCV community,