Welcome to the August 6th edition of Three Things Thursday.  I hope this message finds each and every one of you safe and healthy. This week’s Three Things follows a very eventful week with the August 4 primary, as well as big milestones on PFAS and protecting our public lands.

A TON of work went into the Michigan primary election across the Michigan LCV family of organizations. Our Political & Outreach team vetted, endorsed and supported more state House candidates than we’ve ever before.  Our Civic Engagement team engaged many  municipal  clerks and educated thousands of voters on their new voting rights — especially the option to vote at home safely, a key change due to the passage of the Promote the Vote/Proposal 3 in 2018. Our team also participated in the Michigan Voices-led Election Protection monitoring program on Election Day. Our entire Michigan LCV and Michigan LCV Education Fund teams were running at a full sprint into Tuesday!

In terms of primary results, I’m happy to report that all of our 36 state House endorsed candidates made it through their elections!  We will be announcing a second round of state House endorsements in the next week (or so) now that we have a clear sense of the races.  As a reminder, a full list of our state-level endorsed candidates can always be found at michiganlcv.org/endorsements-2020.

We chose only one state House primary for deep involvement this election cycle.  As you know, primaries can be tricky because there is often not a clear difference in candidate viability nor a bold distinction between the candidates on the issues we care about most. This year, however, we found one race where the distinction on our issues was crystal clear — House District 100.  There, our Conservation Voters of Michigan (CVM) PAC ran an independent expenditure (IE) campaign in support of incumbent Rep. Scott VanSingel.  We may not agree with Rep. VanSingel on every issue, but he’s always been strong on drinking water contamination issues and went to bat in 2018 with us to preserve cleanup funds.  When the Renew Michigan Fund (contaminated site clean up, recycling, waste management) was on the chopping block,  Rep. VanSingel went to Republican leadership and led the charge to save it.

This year, Rep. VanSingel faced a local municipal official; a Tea Party challenger; someone whose values and positions on issues pertaining to the protection of our air, land and water were completely antithetical to those of Michigan LCV and our thousands of members across the state.  The race was highlighted early on in one capitol news service as being a toss-up.  Our CVM PAC sent two pieces of mail, ran digital advertising and made live phone calls to likely Republican primary voters — emphasizing that Scott was a true conservative by being pro-conservation (preservation of farm lands, our Great Lakes, water contamination cleanup, etc.).

I’m delighted to say that Rep. VanSingel won by a significant margin!  When speaking with our Government Affairs Director Nick Occhipinti after Election Day, Rep. VanSingel expressed his deep appreciation. His victory  sends a clear message that a pro-conservation Republican *can* win big in a Michigan Republican primary even against a Tea Party challenger, something that hasn’t been the case in Michigan for the past decade.

In terms of Congressional elections, we had a close eye on number of races:

Each of these LCV-endorsed candidates are included in the Give Green program, where donations can be made to environmental champions running for office all across the country.

Michigan’s August primary election also revealed some significant challenges in terms of process and equitable access to voting that must be addressed before the November General Election.

To begin with, Michigan is in serious need of poll workers. We saw this play out in the City of Detroit and Flint, in particular, with several polling locations opening late due to the lack of sufficient staff and training.  There is also a need for deeper, more thorough and consistent communication with voters in relation to changes to their polling locations (some clerks had to move poll centers due to buildings being shut down by COVID-19).  And, very importantly, clerks all across the state need more time to process the huge influx of mailed ballots (Michigan saw a record number in the 2020 primary!).

Our Voting Rights & Election Protection team has been working since the March election to be a part of the solution.  We are rolling up our sleeves to work with an array of partners, including the ACLU, Voters Not Politicians, Center for Secure & Modern Elections,  the NAACP and All Voting Is Local.  Together, we’ll work to address the poll worker and communications challenges, along with voter mobilization and protection.

For example, on Wednesday, we joined the ACLU, All Voting Is Local and Voters Not Politicians for a press conference to break down what went right and what went wrong on Tuesday’s Primary. You can read about that in this Detroit Free Press story.  And the week prior, we called on the Legislature to take action on common sense measures to give clerks support as they deal with high volumes of absentee ballots during these challenging times. You can read about that legislation here.

November’s election is too important to allow our state’s system of democracy to be undermined and weakened.  Michigan LCV and Michigan LCVEF will be actively pushing for all voters to have access to a full array of safe voting options to vote at home, if they want.  We will keep you posted.

2. As PFAS protections go into effect, MLCV partnered with Congresswoman Slotkin and EGLE Director Clark to spread the word

Michigan’s first drinking water standards for PFAS went into effect Monday, August 3rd. To mark this momentous day, we participated in a press conference with Congresswoman Elissa Slotkin and Director of the Department of Environment, Great Lakes, and Energy (EGLE) Liesl Clark.

Michigan now has some of the strongest PFAS standards in the nation — an expedited process that Gov. Gretchen Whitmer initiated last year; keeping her campaign promise to protect our health and clean up our drinking water.

Congresswoman Slotkin emphasized repeatedly that Michigan’s action has been key to her securing PFAS provisions in the current version of the National Defense Authorization Act.  Slotkin’s provisions require, for the first time, that the Pentagon do more on PFAS than simply continue to study the problem, mandating that it clean up PFAS seeping off military bases nationwide, and do so based upon Michigan’s new, tough state-level PFAS standards.

During the press event, I took time to also emphasize Congresswoman Slotkin’s work last year, which resulted in the passage of six (6) other provisions on PFAS, including her PFAS Monitoring Act, which — for the first time — requires the EPA to ensure municipalities test for PFAS chemicals in drinking water samples. 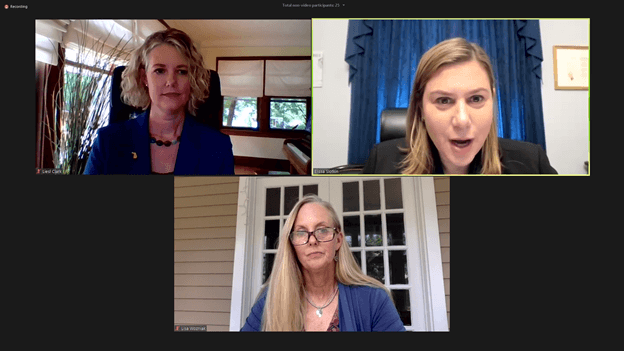 For me, the highlight of the press conference was when Congresswoman Slotkin gave a “shout out” to “PFAS activists” (which included Tony Spaniola, Sandy Wynn-Stelt, Cathy Wusterbarth and others, although specific names were not mentioned) who took their toxic PFAS contamination stories to Washington DC in 2018.  Slotkin credited these citizen activists for putting the issue on her radar and inspiring her to be a champion for protecting our water from these dangerous “forever chemicals.”

Michigan LCV has been proud over these three-plus years to support impacted, frontline residents in this fight.  Their voices and stories made the difference!

If this week wasn’t full enough, Tuesday brought the end to a decades-long campaign to secure full and permanent funding for critical protections for our public lands, outdoors and parks. The Great American Outdoors Act was signed into law by the president.

This historic legislation will provide $9.5 billion over the next 5 years to maintenance and infrastructure upgrades to national parks across the country.

It will also fully fund the Land and Water Conservation Fund (LWCF) at a full $900 million each year. In past years, this fund has only hit around the $450 million mark. The passage of the Great American Outdoors Act means there will be much more money going toward key land conservation programs, like acquisition of new parks, protection of current parks, and state grants for habitat restoration, forest preservation and more.

To put things into perspective, over the past five decades, Michigan has leveraged $336.7 million in LWCF funding for protecting special places in our state, like the Sleeping Bear Dunes National Lakeshore, Huron, Ottawa and Hiawatha National Forests, and the North Country National Scenic Trail.

That money has also gone to key state programs, like the Forest Legacy Program, which supports sustainable forest operations while enhancing wildlife habitat, water quality and recreation. Through this program alone, the state has leveraged $16 million in federal funds to invest in Michigan’s forests. More funding will allow for expansion of critical programs like this well into the future.

There is also a large backlog of maintenance projects for parks in Michigan and across the country. This new law will move us toward protecting these vital assets to our lives and our economy for future generations.

An enormous thanks goes to Senior Partnerships Manager Bentley Johnson who has been our lead on this issue and has been working on passing legislation that fully funds the LWCF for the better part of his career.

I invite you to check out a Michigan Radio story about the impact and importance of the law for Michigan featuring our Communications Director Nick Dodge.

This is truly a reason to celebrate. We tip our hats to our U.S. Senators and members of Michigan’s Congressional delegation for their hard work to get this passed and signed into law!

Until next week, please be safe. Mask up. May the sunshine and summer flowers, bring smiles and energy. We have big work ahead of us, my friends!