Welcome to the August 5, 2021 edition of Three Things Thursday!

This week’s edition of Three Things Thursday is all about elections: Michigan LCV’s involvement in the Dearborn mayoral primary; nonpartisan voter mobilization in the Detroit municipal elections; and why the Biden election matters so much for tackling our nation’s largest problems

1. A Great Victory in the Dearborn Mayoral Race! Now, on to November!

You better believe our team was dancing!

We endorsed Abdullah early in his race and “embedded” two Michigan LCV teammates in his campaign office where they spent time recruiting volunteers and organizing #OurWaterOurVote canvasses and phone banks over the past two months.  Many other members of the Michigan LCV family stepped up to help, knocking on hundreds of doors and making thousands of phone calls.  We also went to great lengths to raise funds for Abdullah’s campaign, including our work to ensure that he was featured on GiveGreen, which made candidate Hammoud the very first mayoral candidate in the nation to be featured on this important fundraising site.

The top two vote getters from the primary–Hammoud (42.36%) and former State Representative/former Wayne County Commissioner Gary Woronchak (18.17%)–will now face off in the general election, and Michigan LCV intends to pull out all the stops to ensure that Abdullah wins in November. Deputy Director Bob Allison and I hit the doors in all our free time! Here are portions of a few great press clips that appeared yesterday. I encourage you to read the articles in full when you have a moment:

In a stunning win, State Rep. Abdullah Hammoud, D-Dearborn, got 8,774 votes, 42.36% of the vote among seven candidates running for mayor in Dearborn.

Earlier this year, Dearborn City Council President Susan Dabaja was seen as a favorite to win, garnering the endorsements of police and fire unions and Mayor John O’Reilly Jr. But she came in third place, far behind Hammoud.

The results Tuesday also illustrated the changing demographics in metro Detroit. The top vote-getters for mayor in Dearborn, Dearborn Heights, and Hamtramck all happen to be Arab American Muslims and the candidates in second-place they will run against in November are all Polish American Catholics.

Some in the community who headed to the polls Tuesday saw the chance to make history; others said they wanted to weigh in and register complaints about the city’s response to recent flooding and issues such as taxation.

“There’s a lot of excitement in the community. Not just the excitement, but there’s a lot of backlash,” said Majed Moughni, a Dearborn attorney and activist who runs a Facebook page for residents. “We’re hoping that there is change — at least the positive change that we want.”

While Hammoud’s primary success is significant in a city the U.S. Census Bureau estimates has more than 47% of residents identifying as Arab, it signifies how his message transcended demographics, said Sally Howell, an author and associate history professor at the University of Michigan-Dearborn who directs the Center for Arab American Studies.

“He’s a progressive political figure. He’s cut his teeth on environmental, and labor and equity issues,” she said. “There are a lot of concerns right now in Dearborn. Now that the flooding has become such a major issue, that’s something that’s going to be on the next mayor’s plate: how do you deal with climate change and take this infrastructure and make it work for people? I think he has the skill to tackle it.”

In a speech to volunteers and community members, Hammoud described his decisive victory as a group effort.

Please know that there will be a ton of opportunities to plug in and support Abdullah Hammoud in the coming months. Stay tuned!

2. Nonpartisan Get Out The Vote (GOTV) Work in Detroit and Hamtramck!

Our Democracy for All team established a great campaign this year, entitled 313 Votes, which has focused on contacting voters via phone and text in preparation for the August 3rd elections in Detroit and Hamtramck. A few of our teammates also served as poll workers, including Clare Allenson and Brooke Harris. Democracy for All Director Clare Allenson Democracy for All Manager Brooke Harris

Here are some key takeaways the team shared with me from Election Day in Detroit:

I’m super proud of our amazing Democracy for All team!  In addition to all this 2021 election work, they wrote and published the first edition of our new Democracy Drumbeat newsletter this week, which will be published every other week from here on out. It’s an essential resource related to nonpartisan voter education/protection/mobilization, voting rights (and combating voter suppression) and the redistricting process. I hope you’ll check it out and let us know what you think!

3. Why Elections Matter: Build Back Better and What it Means for Michigan

While the first two Things this week pertain to the 2021 elections — both support of candidates and nonpartisan voter education/protection/mobilization– the last of my Three Things is connected to last year’s election.  The importance of the 2020 Presidential Election can not be overstated.  With the election of President Joe Biden and Vice President Kamala Harris we not only ejected a racist, dangerous, narcissistic climate denier from office, but we put in place  bold leaders who understand the critical importance of voting rights and have a compelling vision for what it means to care for people, planet and public health.

The Biden/Harris Build Back Better plan is a sensible, strategic, essential means by which to tackle our nation’s largest problems–water infrastructure and water contamination, the safety of our roads/bridges, and the climate crisis–while creating good-paying jobs and rebuilding our economy.

As you know, the Michigan LCV team has been working hand-in-glove with our national partners to support the Biden/Harris plan, which includes strong support of key members of our congressional delegation who are on the front lines.  This effort has included door-to-door voter contact, phone calls, digital ads and TV/radio spots.  Just yesterday, the most recent TV ads in support of Representative Haley Stevens and Elissa Slotkin’s leadership — as they fight for major investments in clean energy jobs and climate justice — hit the airwaves.  This is part of a $10 million national campaign led by Climate Power and LCV focused on 32 members of Congress across 21 states. Michigan–per usual–is front and center.  You can check the ads out here, and read the LCV press announcement here. 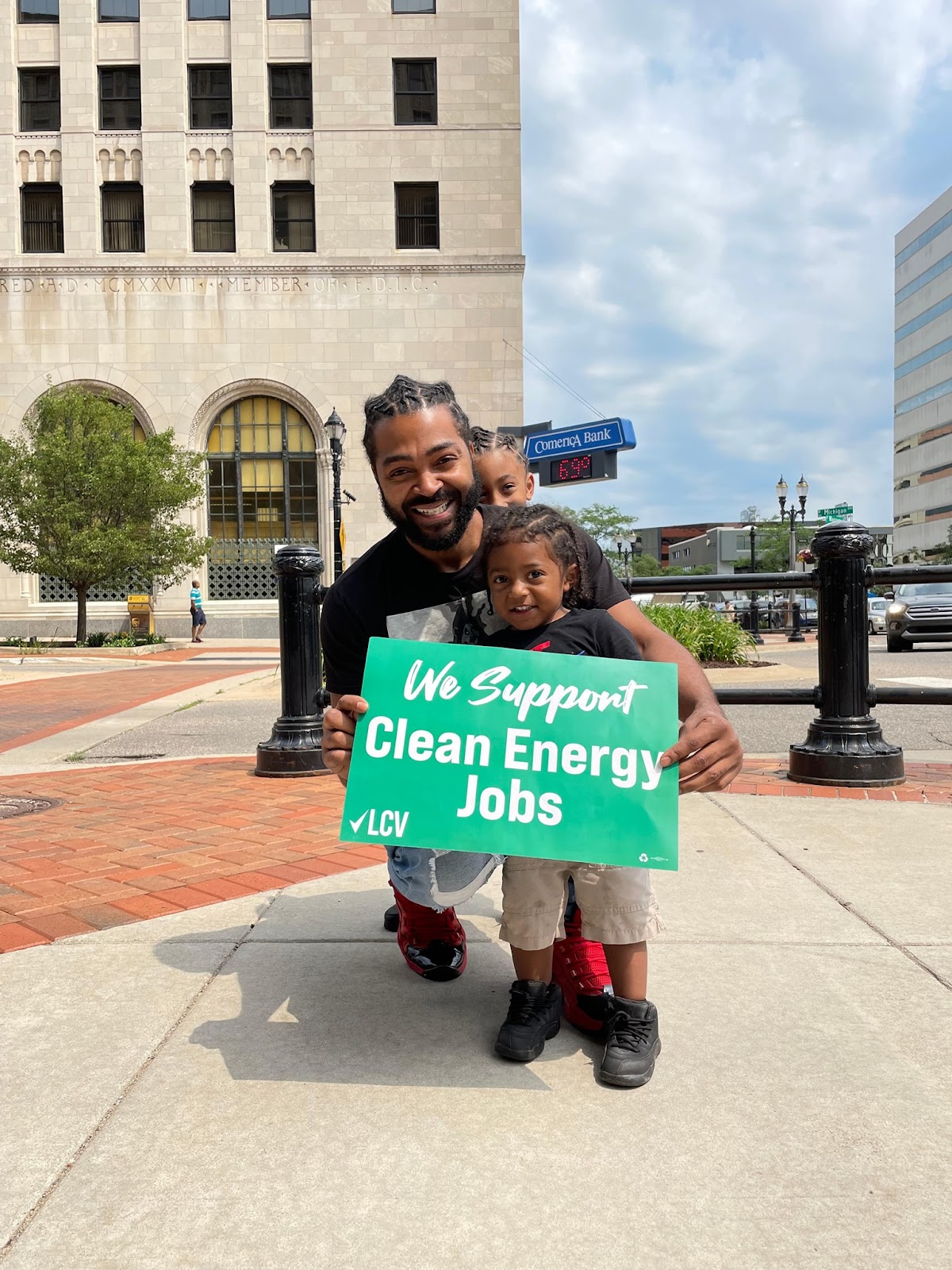 Here’s the latest from our Washington Weekly newsletter, which I encourage you to read in full on our website:

Late Sunday night, an unusual time for a Senate session, the 2,702 page bipartisan infrastructure bill was finally released. After months of negotiations, we can now begin to see how this legislation will impact Michigan.

Due to partisan differences and a 50-50 Senate, bold climate action was always going to have to come through a second partisan package. Yet there were initial hopes there would be bipartisan consensus on funding for electrical vehicle infrastructure, nation-wide lead service line replacement, and clean energy incentives. The release of the bill on Sunday unfortunately confirmed that climate and water priorities met the chopping block during final negotiations.

In good news for the Great Lakes — and the 20% of the world’s fresh water that they hold — the bipartisan bill includes $1 billion for the Great Lakes Restoration Program — the largest total ever given to the program in one piece of legislation. A second major water priority also made the cut, as $10 billion was allocated for nationwide PFAS remediation.

House delegation members expressed their concerns about earmarks for transportation funding being left out. The House passed a funding bill totaling $210 million for 12 of Michigan’s 14 congressional districts, but this will likely not make the cut in the final Senate product.

Michigan knows all too well the danger that lead pipes pose to our drinking water, yet it is a major problem throughout the country, and disproportionately in communities of color. Unfortunately, the bill falls woefully short of what is needed to address the issue. Funding for lead service line replacement was gashed from the President’s goal of $45 billion to $15 billion in the bipartisan deal. Experts estimate the total amount needed to replace all lead service lines could be $60 billion or more, meaning that if additional funding is not passed through separate legislation in the near future, lead will remain a significant problem in the state and throughout the country — and continue to exemplify how structural racism is built into America’s infrastructure.

The lack of climate provisions in the bipartisan infrastructure bill leaves the $3.5 trillion reconciliation package as seemingly the only vehicle to fulfill the President’s climate goals and to meet the deadlines set by scientists to avoid the worst effects of climate change. Senate Majority Leader Schumer has stated: “The Senate is going to stay here until we finish our work,” implying the Senate will not go home for August recess until both the bipartisan deal is done, and the Senate begins the budget reconciliation process. For the sake of our climate and our state, let’s hope he’s right.

Please know we are putting our collective shoulder to the wheel and are determined to get bold action to address both the water and climate crises!

As always, thank you for your incredible and consistent support of our work.

PS: I encourage you to watch our latest recap video for the month of July. Our communications team has been creating these short recap videos each month animating and telling the story of Michigan LCV Ed Fund and Michigan LCV’s work!