Welcome to the August 26, 2021 edition of Three Things Thursday! August has flown by, just like the rest of 2021, and with each passing day the Michigan LCV team has kept our collective “pedal to the metal” (of an all-electric vehicle, of course), focusing on the critical issues threatening human health, the natural environment and our democracy.

In celebratory news, Tuesday’s budget vote in the U.S. House of Representatives (which I will address in greater detail) opened the door to the passage of the John R. Lewis Voting Rights Advancement Act, an important step in fighting back against the multitude of right-wing, anti-voter efforts that have been introduced across the country following the 2020 election.

Another highlight for me, personally and professionally, was a fabulous gathering of environmental leaders in Northern Michigan hosted by Michigan LCV’s dear friends, Denis Pierce and Martha VanVleck.  While Denis, Martha and Tom Porter have been hosting this event for the past many years, the 2020 event was cancelled due to COVID. Held on the shores of Glen Lake, this annual gathering offers an opportunity for leaders throughout the state to share information and ideas, while “breaking bread”, listening to the beautiful music of Seth Bernard, and watching the sun set over Sleeping Bear Dunes National Lakeshore.  This year was additionally special because my husband, with the assistance of Ed Werner (Lauren Mallas’ husband), made the meal: paella over an open fire. 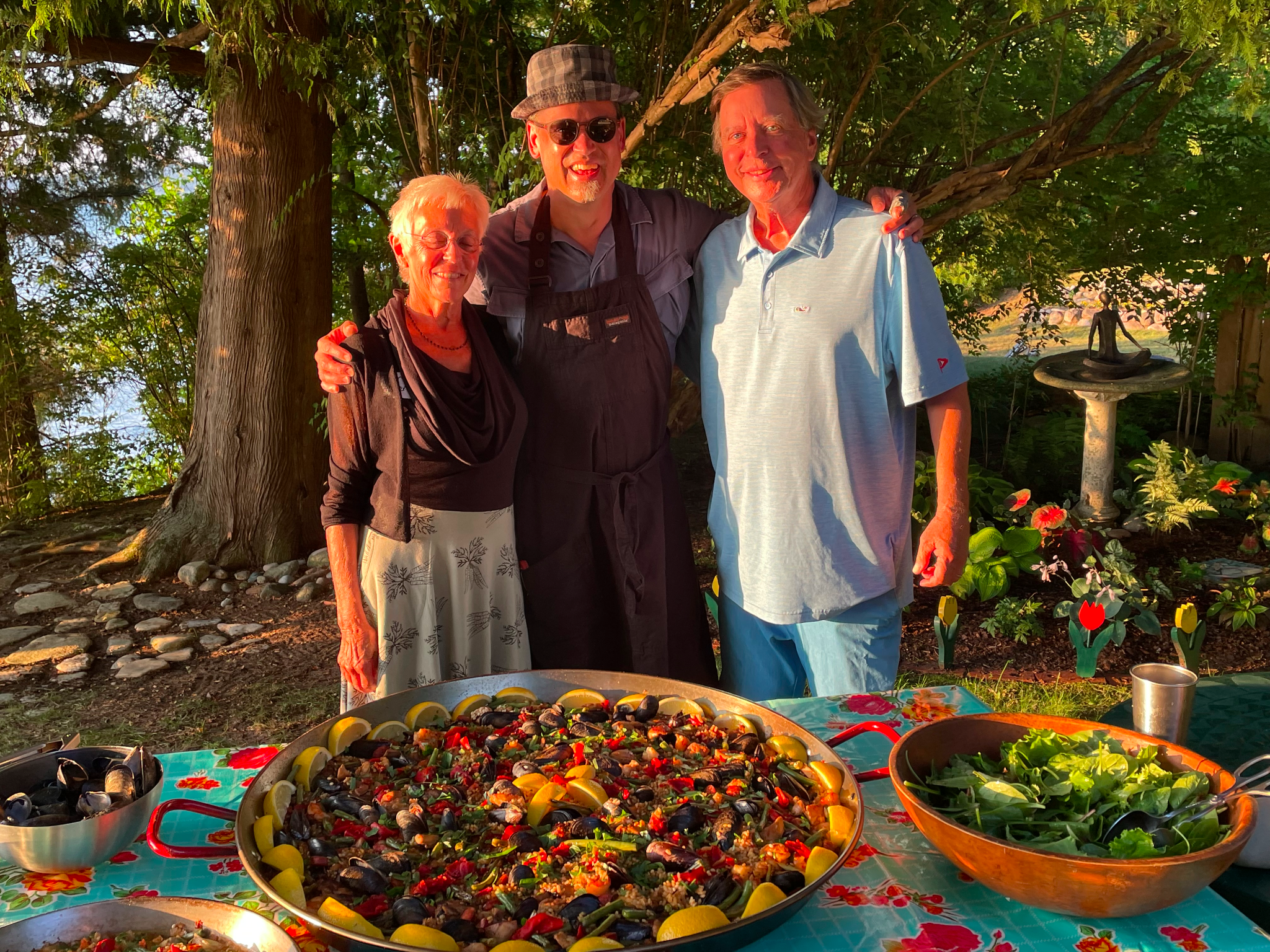 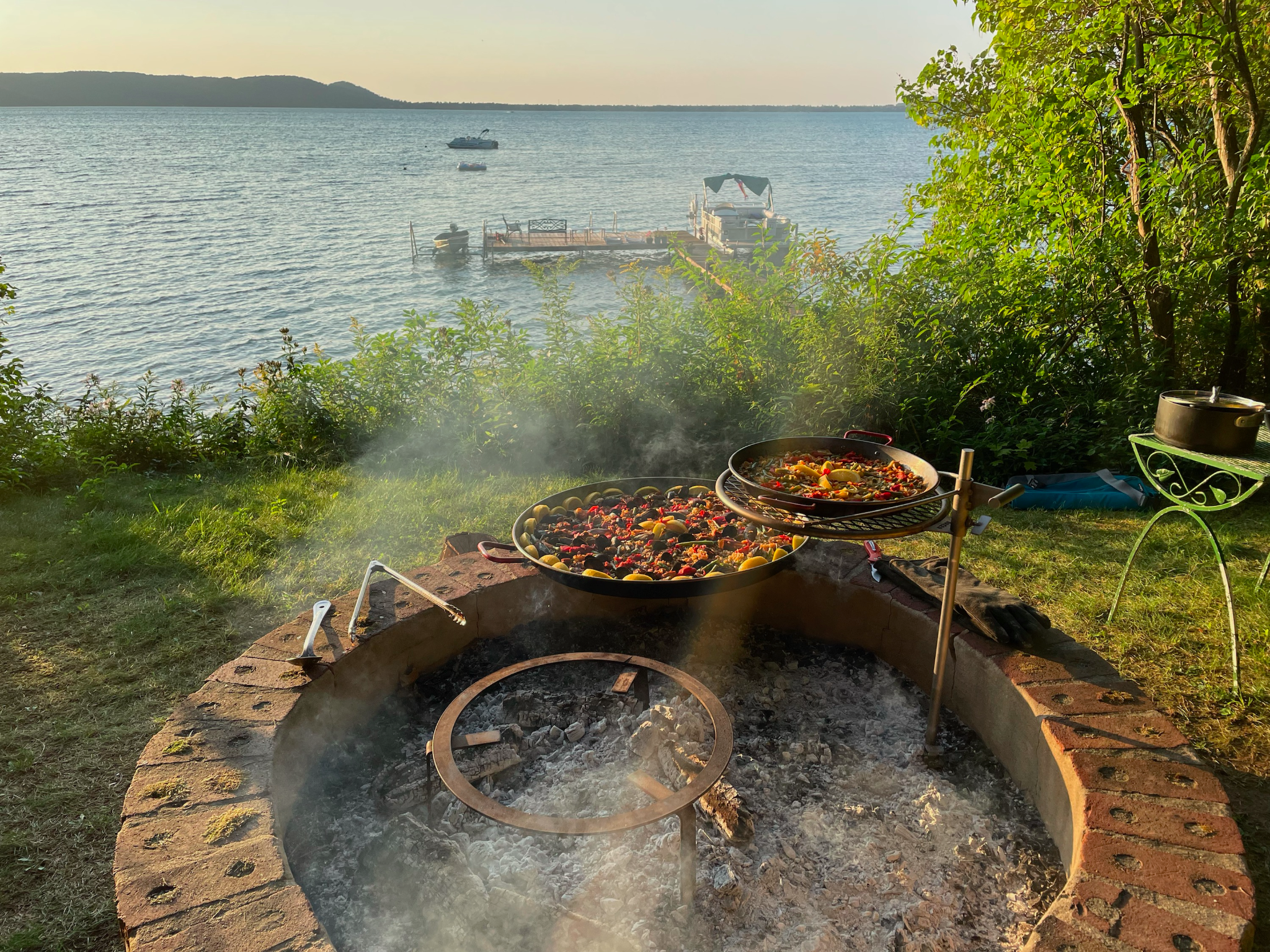 Enough celebrating! Onto this week’s Three Things, which includes a look at Tuesday’s House vote to pass the $3.5 trillion budget plan, our recent work holding Michigan’s utility companies accountable amid widespread power outages, and collective action in Oscoda to bring much-needed attention to the PFAS contamination plaguing that community. Let’s jump in!

House Democrats yesterday passed the $3.5 trillion budget blueprint proposed by the Biden administration that sets the United States on track to increase our social safety net and provide long overdue funding for our country to tackle the climate and water crises.

After what seemed like months of negotiation, Democratic leadership, headed by House Speaker Nancy Pelosi, got moderate Democrats on board in order to pass the budget plan along party lines. The vote now allows Congress to move forward with President Biden’s plan to address climate change and infrastructure investments and pass the legislation through the reconciliation process — meaning that such investments can be achieved without Republican votes — in a vote proposed to take place by September 27th.

As I have written about in previous editions of Three Things, the Michigan LCV team has been working intensely over the past few months to facilitate support from Michigan lawmakers for both the budget plan and the infrastructure plan. Focusing on Michigan climate champions at the state and federal levels, we have been promoting the Biden administration’s vision, emphasizing time and again the critical importance of the moment and the opportunity we have to build back in a cleaner, “greener” more sustainable and resilient manner as we slowly emerge from COVID-19, tackling the biggest threats facing our communities. While our work is not yet complete, this week’s vote was a massive step in the right direction.

That said, moderate Democrats remain in the way as we work to get President Biden’s vision across the finish line. In order to pass both the infrastructure bill and the reconciliation bill (which focuses on critical measures to address climate change), all 50 Senate Democrats must remain aligned. Moderate Democrats have called for the infrastructure vote to be a stand-alone process in stark contrast to the progressives’ vision, which sees the infrastructure bill and reconciliation bill as intrinsically linked to one another. Sen. Joe Manchin (D-WV) and Sen. Krysten Sinema (D-AZ), as example, have expressed concerns over the price tag for the plans, but the Michigan LCV team and our partners at the national level continue to work to build support and get these extremely important and timely bills across the finish line.

Never before have we had such an opportunity to address multiple critical issues at once in a manner that will protect our communities and future generations while helping to build back our economy from COVID with the creation of hundreds of thousands of good-paying clean energy jobs.  This is a once-in-a-generation opportunity to invest in our aging infrastructure while simultaneously tackling the climate crisis.

I will be sure to keep you updated on our team’s work over the next month, as well as on any/all developments in Washington. For a detailed, in-depth look at the latest developments in our nation’s capital and what they mean for Michigan, make sure to check out this week’s edition of the Washington Weekly.

With the recent UN report, we have clear verification that climate change is accelerating faster than ever.  Indeed, communities all across the state are beginning to feel the impact in powerful and damaging ways. Combined with Metro Detroit’s aging infrastructure, this summer’s extreme precipitation and weather resulted in widespread flooding (which I chronicled back in early July), causing millions of dollars worth of damage for area residents. Coupled with last summer’s Edenville dam collapse, which displaced more than 10,000 Michiganders, it is clear that the impacts of our changing climate will only continue to worsen and that we must take action to protect our communities from the worst of it.

In addition to the flooding, Southeast Michigan was hit by severe thunderstorms a few weeks ago, resulting in massive power outages that spread across Oakland, Macomb, Wayne, and Washtenaw counties. The outages impacted more than 800,000 homes and businesses and stretched on for days, with some remaining without power for close to a week. At the height of the outages, more than 10% of Michigan residents did not have power, endangering families and individuals who rely on electricity for clean water and as a means to address health complications.  The outages also resulted in the loss of hundreds of thousands of dollars worth of refrigerated food and perishable items, with many Michiganders financially unable to replace what was lost.

In response to the widespread outages, Gov. Gretchen Whitmer called out Michigan’s utility companies, namely DTE and Consumers, demanding the providers improve reliability while also compensating customers who lost power. Turning to the Michigan Public Service Commission, the Governor moved to ensure that DTE and Consumers do not seek to recover lost revenue from customers and put pressure on the utility companies to issue much-needed credits and implement extensive emergency preparedness plans, while fast-tracking the adoption of new rules to increase the reliability of Michigan’s energy grid.

In lockstep with Gov. Whitmer, the Michigan LCV team issued a strong statement calling for a moratorium on rate hikes until independent investigations into the recent outages have been completed.

In a radio interview with WJR 760 AM last Friday, Michigan LCV Deputy Director Bob Allison did an extraordinary job articulating the challenges facing Michigan’s energy grid, residents, and entire communities, and explaining in a clear, concise manner why we must hold our utility companies accountable for not stepping up to the plate.

“These recent outages, while devastating for families and businesses, are not an isolated incident. We’ve seen this over and over again, and we know it’s going to happen again. But what’s even more frustrating is that for years now our residential electricity rates have been skyrocketing, eating up more family budgets, putting strain on household incomes. And yet what we’re getting for it is more blackouts, longer outage times, and really, less reliability.” – Bob Allison, Michigan LCV Deputy Director on WJR 760 AM

In case you didn’t know, Michigan continues to suffer disproportionately widespread and impactful outages as compared to the rest of the Great Lakes region, while both DTE and Consumers have raised residential electric rates by hundreds of millions of dollars over the past five years without meaningful improvements to service or restoration times. These two utility companies, which basically hold monopoly control over Michigan’s energy grid, continue to pay zero federal taxes while compensating their CEOs to the tune of $10 million each last year.

The recent outages and lack of reliability of utility companies and Michigan’s energy grid are not issues without intersection. As climate change continues to accelerate, our communities will only experience more of the effects, including severe weather, debilitating heat, and extreme precipitation, all of which put a strain on our aging infrastructure and electricity grid. These outages and their impacts are perfect examples of why we must take action to address the climate crisis. It is imperative that we protect Michiganders, especially those living in our most vulnerable, disenfranchised communities who have the least amount of agency to affect change.

Since its launch earlier this summer, the Great Lakes PFAS Action Network (GLPAN) — a coalition of impacted individuals and community groups, supported by Michigan LCV, the Ecology Center, and the National Wildlife Federation — has been busy working to raise awareness about the toxic PFAS crisis that continues to impact more and more Michigan communities.

PFAS has, over the past decade, become a widespread problem for Michigan communities including Oscoda (where the former Wurtsmith Air Force Base is located), Traverse City (near the airport and Coast Guard Air Station), and Belmont (close to the former Wolverine Worldwide tannery), contaminating resident’s drinking water and causing serious health complications, including some cancers.

On Tuesday, at an event in Oscoda centered around a bus tour of the former Air Force base and an in-person screening of the documentary No Defense:  The U.S. Military’s War on Water, GLPAN and Need Our Water (NOW) Oscoda called for state and military authorities to take action to address PFAS contamination after years of foot-dragging and empty promises.  This call was bolstered by an important report released by the National Wildlife Federation and GLPAN documenting the years of inaction on the part of the federal government.

Despite Air Force officials claiming the law has been followed as remediation plans and talks of addressing the PFAS contamination in Oscoda have circulated over the past decade, little has been done. Tuesday’s call for action was the latest attempt (over many years) to hold the military accountable, a history that the No Defense documentary explores.

Be sure to stay tuned as we continue this important work and for more information about how you can get involved.

As always, thank you for all you do to support our work.  I leave you with this to make you smile: a picture of my canine Guapo having a grand time in Lake Huron, following time in Lake Michigan and Glen Lake last weekend.  Ah, the life of a Great Lakes dog! 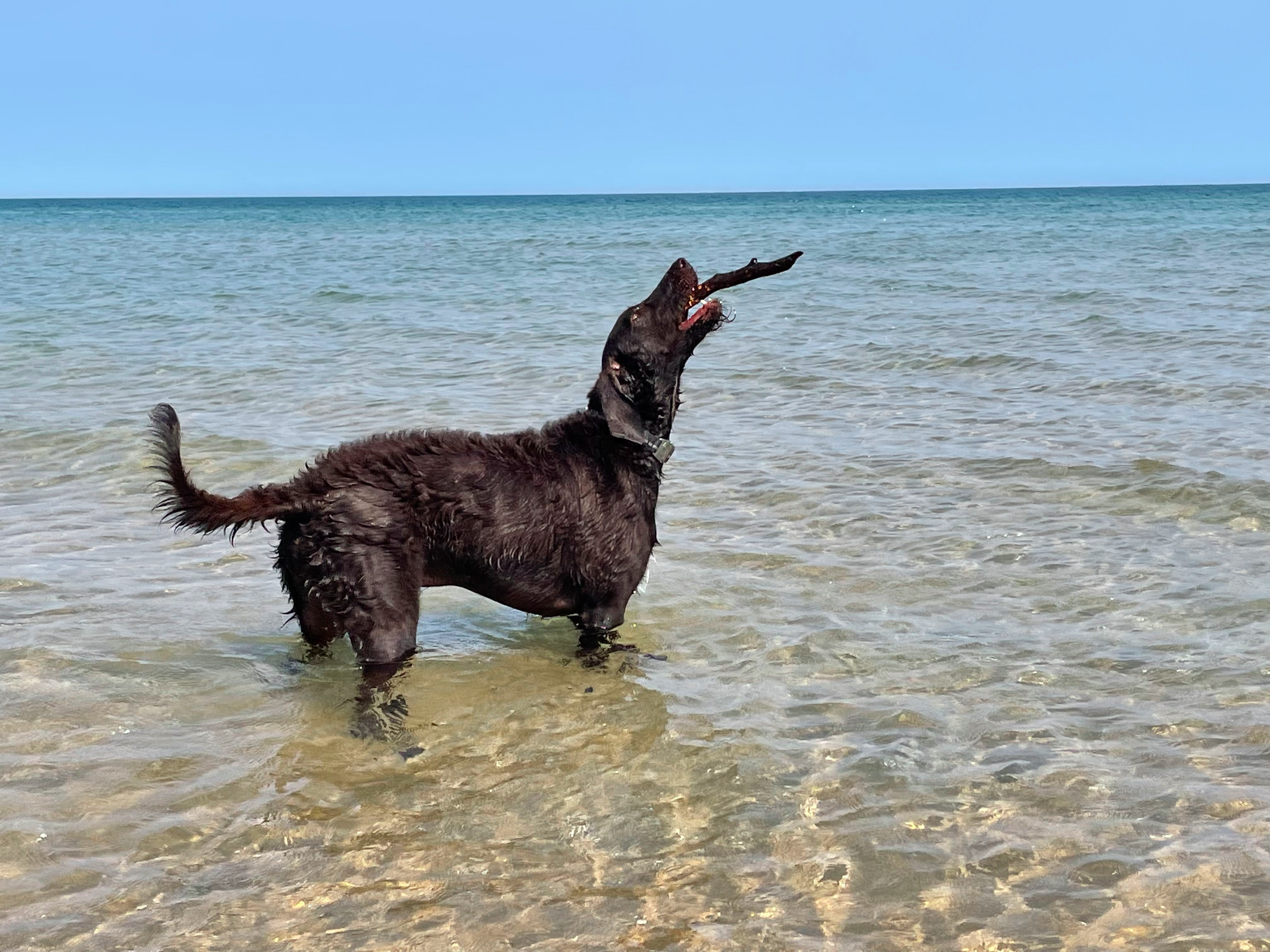 On Wednesday evening, I had the pleasure of moderating a tele-town hall event on clean drinking water and the health of our Great Lakes featuring several Michigan lawmakers who have demonstrated a deep commitment to addressing serious threats facing Michigan’s water.

The “Great Lakes, Clean Water Town Hall,” hosted by Michigan Senate Democrats, featured State Senators Rosemary Bayer, Winnie Brinks, Sean McCann, and Paul Wojno, as well as State Representative Jim Ellison. The conversation and questions centered around what each of these “clean water champions” have been working on in their respective districts to ensure clean drinking water for all and protect one our most precious natural resources: the Great Lakes.

I had a fantastic time moderating yesterday’s discussion and I encourage you to watch the recording, which you can find here.