Welcome to the August 19, 2021 edition of Three Things Thursday! This week’s edition includes a look at both a regional mayoral climate forum that I was honored to moderate on Tuesday and an important climate event (with big name state and national speakers) that took place yesterday in Dearborn, and an update on Michigan LCV’s recent Champion Summer of Action door-to-door canvassing. Let’s jump in!

On Tuesday afternoon, I had the opportunity to moderate the Midwest Mayors’ Virtual Panel on Climate, Clean Energy, & Jobs, which was a truly inspiring conversation with five amazing municipal leaders from Michigan, Minnesota, Nebraska, Ohio and Wisconsin.  Each mayor spoke passionately about the climate crisis, investing in our nation’s infrastructure and protecting their communities from the effects of our changing climate.   They also made it very clear that the support and expectations of their constituents were paramount to their drive and success.

The panel, hosted by our friends at Wisconsin Conservation Voters, included: 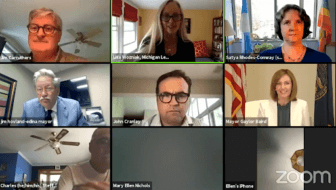 Tuesday’s Virtual Panel on Climate, Clean Energy & Jobs featured mayors from cities across the Midwest, including Traverse City’s Mayor Jim Carruthers who can be seen at the top left.

During the hour-long panel discussion, the five mayors discussed President Biden’s climate and infrastructure agenda, the recent UN report on the accelerating effects of climate change, and what their cities are doing to foster sustainability and climate resilience.

Traverse City Mayor Jim Carruthers described how Traverse City has become a leader in the transition to carbon neutrality, working to achieve meaningful carbon reduction goals over the coming years and decades.

Mayor Satya Rhodes-Conway of Madison, WI spoke about the need for federal funding as local leaders across that nation take action to create greener, more sustainable communities, and the critical need for federal lawmakers to take bold actions (e.g. broad-based renewable energy standards), establishing holistic goals for the nation.  Mayor Rhodes-Conway referenced the damage done by both inaction and rollbacks during the Trump administration, emphasizing that “now is the time to make up for lost time and create the change that we need in order to protect our planet and communities”.

Thanks to a 100-megawatt solar energy installation, Cincinnati will be the first city in America to be “effectively carbon neutral” by the end of the year, meaning that there will be more energy going back into the grid than that being consumed by the city.

It was a distinct pleasure and privilege to moderate Tuesday’s panel. The leadership exemplified by these five amazing local leaders filled me with hope and allowed me to truly envision the Midwest leading the way when it comes to tackling climate change, creating good paying jobs and ensuring a fully equitable transition to cleaner, safer, more just communities everywhere.

…..and many others, all of whom engaged in a robust, compelling discussion about how bold investments in clean energy will create thousands of good paying jobs and bring critical investments to communities living on the frontlines of climate change.

“How do we make sure that infrastructure is one that builds a strong foundation, but at the same time makes sure that everyone is a part of the change that can and will happen because we know the climate crisis is at our doorstep today,” he said. “But we also know that we have power to make real change happen… We can’t win on climate change if we don’t win on environmental justice.” 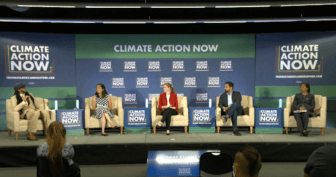 Senator Mallory McMorrow spoke about  the accelerating and highly visible effects of climate change in Metro Detroit, an area that  has been hammered by extreme storms, unprecedented rain, and power outages this summer.

“You can’t ignore multiple hundred year floods in the span of a few weeks. You can’t ignore that we had a gust of wind at 60 miles per hour that knocked down trees all over my district and people are still out [of power],” she said. “You are paying for it because we are not taking action, because we are still building our infrastructure for a time that does not exist anymore. People are bearing that on their backs, in their paychecks, and I think you can’t ignore that it’s here, it’s at our doorstep, and it’s happening every single day.”

Congresswoman Debbie Dingell closed things out in the final panel of the evening, echoing the fact that Michiganders will only continue to be impacted by the climate crisis, and that we need meaningful and immediate action to protect our communities. 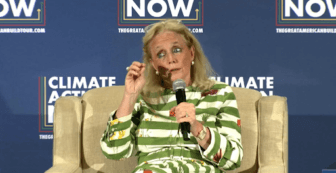 Congresswoman Debbie Dingell spoke about the need to take climate action and invest in our communities in order to create good-paying jobs in Michigan.

“Here in Dearborn, Michigan we have 20,000 homes that have been impacted in the last 6 weeks. We are all living this. It’s time for bold action, it’s time to protect jobs, bring our supply chain back to this country. Make sure that people have good paying jobs and protect the communities that have been so adversely impacted, not for years, but for decades.”

I promise to keep you updated as more amazing events like this take place. Stay tuned!

Michigan LCV’s first “Champion Summer of Action” continues full steam ahead! As described in previous editions of Three Things, this program is centered around door-to-door canvassing in partnership with state legislative champions. Every week, the Michigan LCV team visits key districts all across the state to both talk about that great work being done by our champions and hear directly from voters about the issues that matter most to them. 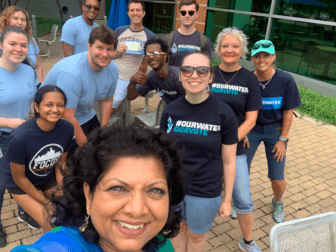 Some of our teammates with Rep. Kuppa before we hit the doors! 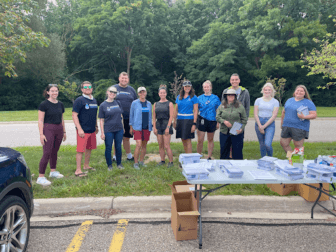 I joined some of our team in Livonia on Monday. That’s Rep. Laurie Pohutsky to my left and Senator Polhanki next to her. 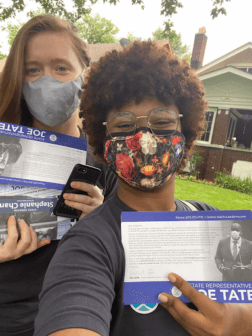 Michigan LCV teammates Clare Allenson and Nina Wimberly on the doors for Rep. Tate and Sen. Chang in Detroit! 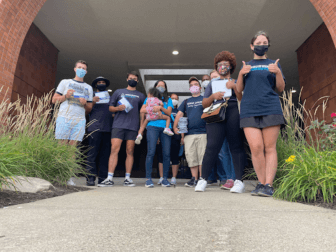 Our team with Rep. Tate and Sen. Chang in Detroit!

Here are some highlights from our team’s work:

This story is a perfect example of why we must invest in our aging infrastructure, especially in our older cities, like Detroit.  Doing so will protect our communities from the accelerating impacts of climate change and ensure clean, safe drinking water.

I’m happy to report that almost all of the constituents who answered the door were interested in what we had to say and eager to make their voices heard. I will be sure to keep you updated as our team completes our “Champion Summer of Action” over the next few weeks.

As always, thank you for all you do to support our work.  I am very grateful for your trust.