Welcome to the August 13th edition of Three Things Thursday.  I hope this message finds each and every one of you safe and healthy. This week’s Three Things pay tribute to former Governor Milliken, recognize Governor Whitmer’s leadership in pushing back on attempts to make detrimental changes to Governor Milliken’s landmark Bottle Bill, and focus on the profoundly important work to protect our democracy.   Next week, we’ll dig into what the Biden/Harris ticket means for the protection of our air, land, water and public health, with an eye to the climate crisis and access to clean, affordable drinking water.

I count myself as one of the truly lucky ones. While I certainly didn’t have the privilege of serving in the Milliken administration, like Bill Rustem (who served as Milliken’s chief staff advisor on environmental matters, coordinated the 1976 campaign for the Michigan “Bottle Bill,” and the 1984 statewide campaign creating the Michigan Natural Resources Trust Fund, and served as one of Michigan LCV’s founding board members) or Joan Luedders Wolfe (founder of the West Michigan Environmental Action Council and key to the passage of the Michigan Environmental Protection Act), I was very fortunate to get to know Governor Milliken and his wife Helen in their later years.  They served together as Honorary Board Members for Michigan LCV and, thanks in large part to Dave Dempsey, I established a relationship with this amazing duo such that I was invited many times to their home for tea and to lunch at their favorite place in Traverse City: the Park Place Hotel.

Like others fortunate to spend time with Governor and Mrs. Milliken, I savored the stories they shared about their lives and their work, admiring, and relishing their kindness, compassion, dedication, civility and grace.

My husband and I drove to Interlochen last Thursday to attend Governor Milliken’s memorial service, which had been postponed and rescheduled a number of times due to COVID-19.  On a perfectly exquisite Michigan summer day, Bill Milliken Jr., Bill Rustem, MSP Capt. Arlyn Brower, Chuck Stokes, Governor Gretchen Whitmer, and Jack Lessenberry shared beautiful, compelling personal stories and perspectives on our state’s longest serving governor. Each of the speeches were genuine and moving, repeatedly focusing on the kindness, civility, and  compassion embodied in a man dedicated to protecting our natural environment and Michigander’s health and well-being, and fighting for fairness and justice for all Michigan citizens. 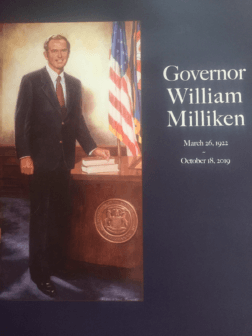 Bill Rustem’s speech was printed in Bridge Magazine and provides a clear sense of history and the incredible legacy Governor Milliken leaves for our state and, indeed, our nation. While I encourage you to read the speech in its entirety, here’s an excerpt:

As governor, Bill Milliken helped pull the nation and the world into a new era of environmental stewardship.

He achieved passage of the historic Michigan Environmental Protection Act, went to the people to achieve adoption of our state’s “Bottle Bill”, and worked with the Legislature to create the Michigan Natural Resources Trust Fund to assure that revenues from the use of publicly owned resources would be reinvested in public lands.

He pulled together the first meeting of the Great Lakes governors and the Premier of Ontario to take a stand against the diversion of Great Lakes waters.

And, like Teddy Roosevelt, he was unafraid of taking on the rich and the powerful on behalf of a better future for our state.

He did so when he took on the pharmaceutical industry to make Michigan the second state to adopt a generic drug law, cutting the costs of prescription drugs for our citizens.

He did so when he took on the soap and detergent industry to ban phosphorus in laundry detergents, markedly reducing algal blooms in the Great Lakes, particularly Lake Erie.

He did so when he took on the bottled beverage industry and its unions to lead a petition campaign and vote to ban throwaways.

What a man. What a leader. May current and future generations of Michigan elected leaders use Governor Milliken’s legacy as a guiding light. And may we all take a moment to recognize the amazing gifts–of time, kindness, compassion and dedication–Governor and Mrs. Milliken gave  the great state of Michigan. 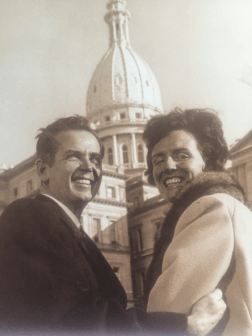 NOTE: Everyone who attended the memorial service was given a white pine seedling. As you know, the white pine is the state tree of Michigan. It is also a connection to Governor Milliken as his middle name, Grawn, loosely means “pine” in Swedish (per Bill Milliken, Jr). I planted mine this weekend. 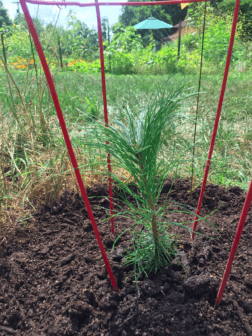 Well, guess what? Just as we celebrate our new drinking water protections, we are simultaneously fighting what we call the “Broken Bottle Bill.”  House Bill 5423, which was introduced earlier this year and was on a fast track through the Legislature, seemed dead (due in large part to Michigan LCV’s efforts), but in the past week it has once again reared its ugly head. If passed, HB 5423 would bring massive changes to the wildly successful Bottle Bill (championed by Bill Rustem and signed into law by Gov. Milliken), stripping $8.5 million garnered through uncollected returns that currently go directly to contaminated site cleanup.

In Round One, Gov. Whitmer and her team were critical to putting this bill to sleep, working behind the scenes to push back on the ill-conceived measures and ensuring the “Broken Bottle Bill” was never brought up on the House floor for a vote.

Now, in round two, beverage distributors are working to breathe life back into the bill, going so far as to hold a press conference yesterday. Please know the Michigan LCV team sprang into action, issuing this response to the renewed call and reminding members of the press that this legislation would strip millions away from toxic site cleanup when we need it most.

Governor Whitmer’s advocacy and steadfast commitment to protecting our drinking water helped preserve this funding the first go-around. To make sure the public understands and recognizes her leadership, we have included Governor Whitmer’s work on the Broken Bottle Bill in a new score on our “How Green is Your Governor’ tool (which is part of our Digital Accountability Suite). I invite you to take part in a one-click action to both thank Governor Whitmer and urge her to keep up the good work.

Click here to view our How Green is Your Governor tool.

In last week’s Three Things, I wrote about the challenges facing our electoral process in light of COVID-19. As I’ve said before, our civic engagement and voter protection work is a fundamental portion of our work, recognizing that public health, clean air, safe/affordable drinking water, the integrity of our public lands, and–indeed–environmental justice are all tied to fair and equitable elections.

As we ramp up our poll worker recruitment, clerk engagement and voter protection, we are also continuing with our virtual “couch parties.  Our next one is scheduled for Wednesday, August 19th at 6 PM.

You can sign up for the event through Zoom here: https://michiganlcv.zoom.us/webinar/register/WN_uirzlWC5SBWeRz9P67mYvw

Wednesday’s couch party will include live musical guests and an informational program to make sure voters have all the info they need to vote safely and in the way that makes the most sense for each individual person this election.  I hope you and your friends have time to join us!

Until next week, please be safe. Mask up when in public. Enjoy this glorious Michigan summer weather.