Welcome to the August 12, 2021 edition of Three Things Thursday!  This week’s edition focuses on Michigan LCV’s recent work when it comes to democracy, drinking water, and the climate crisis.  Onward to the Three Things!

The Legislature may be on recess, but their plans to roll back voting rights remain firmly on the table. By many accounts, the efforts on the part of the Michigan GOP to diminish access to the ballot rival those in Georgia.

Over the past many days, our Democracy For All team, in partnership with an array of pro-democracy organizations and activists, organized a three-event tour to raise awareness about what’s going on in Lansing. Since the 39-bill anti-voter legislative package was introduced by Michigan’s Senate Republicans in March, our pro-democracy coalition has been working around the clock to build opposition and illustrate the fact that there is broad support for the voting rights, as illustrated in 2018 when Proposal 3 was enthusiastically adopted by a margin of 66.8% to 33.2%.

The event tour began in Grand Rapids on Wednesday, August 4th, when Michigan United and PROACTIVE Grand Rapids (as well as other partners) hosted an event at the Boston Soul Cafe. On Monday, August 9th, we assisted with an event at the Bowens Senior Center in Pontiac, which was spearheaded by Oakland Forward. Monday’s event was held outdoors with more than 50 people in attendance, including local elected officials and community leaders who wanted to make their voices heard. Members of Michigan LCV Education Fund’s Democracy for All team:

from left to right, Brooke Harris, Nina Wimberley  and Clare Allenson with one of our partners. And then on Tuesday, August 10th, our team helped Michigan Voices and Detroit-based democracy organizations host the final event at the New Center One Plaza in Detroit, which I was able to attend.  Approximately 70 people showed up and responded with enthusiasm to the fantastic array of speakers and activists. Here’s Michigan LCV teammate Brooke Harris front and center with the fabulous skirt. Brooke was one of the speakers and told moving stories of helping two seniors during the Detroit primary elections as they tried to navigate our voting system, ultimately casting their votes thanks to current laws that support voter participation, don’t diminish it! While the Legislature is not expected to return until at least next week, the worst of the 39 bills (focusing on voter ID laws, absentee voting restrictions, and ridiculous signature matching requirements) lie waiting in the Senate. We don’t yet know whether the Senate will amend any of these dangerous bills before sending them back to the House, but there is no doubt that the votes, when they happen, will be cast fimly along party lines.

Regardless of what gets amended and/or passed out of the Senate–and then the House –Gov. Gretchen Whitmer has consistently indicated that she will veto these dangerous bills when they land on her desk.

The fight, however, does not end there. Michigan Republicans, driven by the “Big Lie” (I encourage you to read this recent New Yorker article) plan to continue their attacks on voting rights in Michigan and we intend to be well prepared for all that they have up their sleeves. Stay tuned.

Several weeks ago I wrote about the launch of the Great Lakes PFAS Action Network (GLPAN), a coalition of organizations that have come together to support frontline communities and individuals who have been impacted by toxic PFAS contamination in Michigan and across the Great Lakes region. As the Network continues to grow and get off the ground, I had the opportunity yesterday to present to the Michigan Advisory Council on Environmental Justice alongside Tony Spaniola and Sandy Wynn-Stelt, two of the founders of GLPAN. Our job was to provide background and perspective on PFAS, as well as connect the dots between this toxic contaminant impacting so many communities and environmental justice.  Given that communities like Detroit, Dearborn and Flint, already disproportionately impacted by hazardous pollution, are now dealing with PFAS, our job was not hard to do. 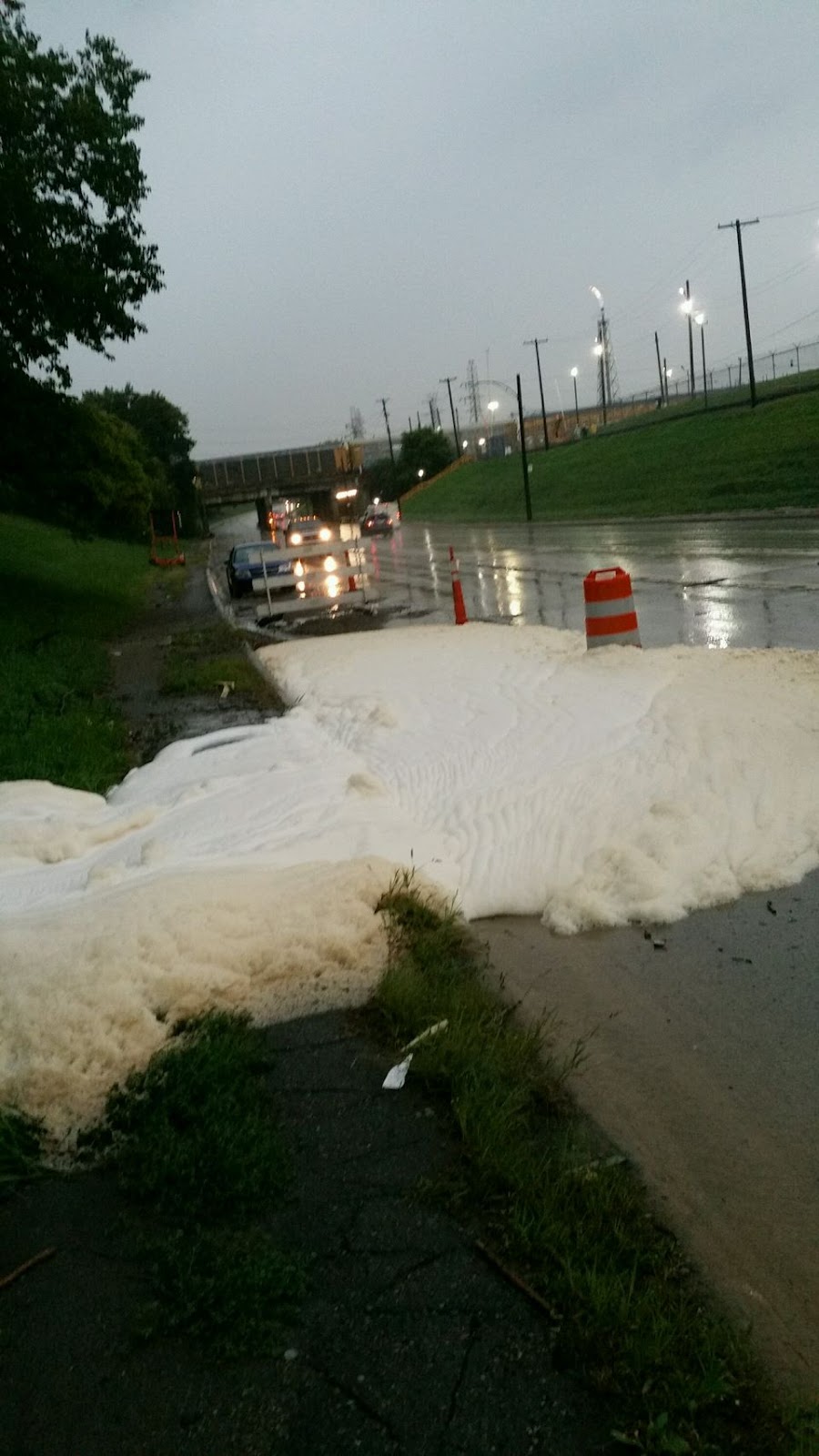 Schaefer Highway near the Marathon facility on Detroit

In other GLPAN news, the Network is hosting a free, virtual seven-day screening of No Defense, The U.S. Military’s War on Water, an award-winning documentary film by Pulitzer Prize winner Sara Ganim.

The film tells the story of how toxic PFAS contamination has impacted the community of Oscoda, MI and will be shown between August 12th (today!) and August 18th to raise awareness and prompt action about the toxic forever chemicals that have devastated the drinking water and health of communities like Oscoda, Belmont, and many others across our state and nation. The free screenings are available to anyone in Michigan, Wisconsin, and Pennsylvania, so please share this information far and wide across the region.

You can register for the free screenings here.

Following the August 12-18 free screenings, there will be a live panel discussion on August 19th at 6:30 PM with the filmmaker, Sara Ganim, as well as individuals featured in the film.

And, if all that weren’t enough, GLPAN is helping one of the leading PFAS advocacy groups in the state–Need Our Water (NOW)–host a free, in-person screening of No Defense on August 24th in Oscoda, the epicenter of toxic PFAS contamination in Michigan. In addition to the film showing in front of a live audience, the event will include a tour of sites in Oscoda contaminated by PFAS (stemming from the former Wurtsmith Air Force Base), a welcome reception, and a panel discussion following the film. Registration and details are available on the Great Lakes PFAS Action Network website.

I’ve seen No Defense. It’s a powerful film challenging viewers to acknowledge what’s been happening right here in our beautiful Great Lakes state.  Please take a moment to check it out and let me know what you think.

Earlier this week, the United Nations IPCC issued a downright scary climate report that many are calling a “final wake-up call” for the global community to take action to mitigate the worst impacts of the climate crisis.

The report indicates that it may already be too late to stop the climate crisis in its tracks, but outlines what countries, companies, and individuals must do in order to meet temperature targets over the next two decades and protect our communities from increasingly turbulent weather, natural disasters, rising sea levels, and climbing temperatures.

The most important part of the report indicates that efforts to limit global temperatures warming by 1.5 degrees Celsius require immediate, comprehensive, meaningful, and large-scale action across the globe. If we do not take these steps to reduce carbon emissions across the board, there will be no stopping the effects of climate change, endangering the very future of humanity.

This week’s UN report yet again reminds the global community of the grave nature of the climate crisis and humanity’s innaction, thus far, to reverse the damage we have already inflicted on our planet. It is absolutely imperative that we come together to protect our communities, our health, and our future as the climate crisis continues to accelerate. That’s why the Michigan LCV team is working hard every day to push and support action at the local, state and federal levels.

I’m happy to say that with a bit of nudging and a whole lot of support from the Michigan LCV team, Michigan’s Senate Democrats introduced a $5 billion Climate Resilience initiative to address climate-related disasters, particularly the massive flooding in Detroit, Dearborn and surrounding communities earlier this summer. Here’s a breakdown of the $5 billion resilience plan:

As we work to address the climate crisis by reducing carbon emissions and transitioning to a clean energy economy, we must simultaneously invest in our infrastructure to mitigate the inevitable impacts of the climate crisis. With our Black and Brown communities bearing the brunt of climate change impacts, while contributing to climate acceleration the least, it is imperative that we act with urgency to put in place things like adequate stormwater and drinking water infrastructure.

In tandem with the Biden administration’s Build Back Better infrastructure plan (which will hopefully be passed by the U.S. House after it was approved by the Senate earlier this week), the Michigan Senate Democrats’ plan to invest in infrastructure in Michigan is a critically important step in the right direction.

Thank you for all you do. Please stay safe. Mask up. And continue to make your voices heard! Until next week…..