Senator Manchin’s permitting bill was the bill that simply would not die. After grassroots pressure successfully forced the big oil deal off of the base text of the National Defense Authorization Act, Leader Schumer agreed to bring the bill forward as an amendment. Once again, environmental justice communities activated and successfully defeated the amendment vote last week. Joined by most of the Republican caucus, 10 Democratic senators took the brave stance of defying leadership to protect frontline communities.

Michigan’s own Senator Debbie Stabenow was one of the key “no” votes that helped sink the dangerous amendment. As the number three Democrat in the Senate, her leadership will be key to helping prevent this bill from coming back next congress. 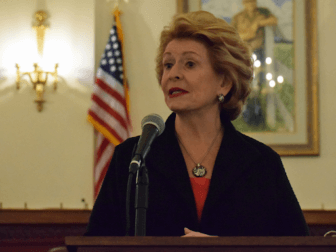 The United Nations Intergovernmental Panel on Climate Change and the International Energy Agency have unambiguously determined that the world cannot afford any new oil and gas development if we are to avoid the worst consequences of climate change. Yet, Manchin’s bill would expedite pipelines, export terminals, and other infrastructure projects that would lock in decades of burning fossil fuels. There is simply no squaring more fossil fuel use with a habitable climate even if renewable energy usage is increased along with it.

Knowing this information, let’s take a closer look at Michigan’s largest energy utility, DTE. Coal is on its way out in Michigan, DTE will retire all of its coal plants by 2035. While this is far too late, DTE is also planning on retrofitting coal plants to burn natural gas, otherwise known as methane. DTE is insisting its plans are aligned with both state and federal climate goals. This is dangerously misleading as the methane gas leaks make the greenhouse gas impact of gas similar to coal.

Similarly the Lansing Board of Water and Light is considering replacing one of its retiring coal plants with a gas-burning plant (but the Lansing Board has an open Request for Proposals to meet its future energy demands – so spread the word to renewables and efficiency experts).

If we are to address the climate crisis it is essential that we speak up against the narrative that we need gas as a transitional fuel. Federal funding from the Inflation Reduction Act will make it easier to build out renewable energy but our utilities will need some convincing. Burning gas will burn our future away – let’s not let that happen.