Manchin’s Big Oil permitting deal put on hold, but what comes next?

Thanks to people making their voices heard to members of Congress, Sen. Joe Manchin’s Big Oil permitting side deal was removed from the continuing resolution to fund the government last week after it did not receive enough support to move forward. In a big win for the climate and communities, the fossil fuel industry finally lost a battle.

The deal was part of an agreement between Sen. Manchin, Speaker Pelosi and Leader Schumer in order to secure Sen. Manchin’s vote for the Inflation Reduction Act, Congress’ most significant action to address climate change ever. Sen. Manchin’s side deal came as the United Nations and the International Energy Agency warned that the world cannot afford any new fossil fuel infrastructure if it is to avoid dangerous tipping points that will cause catastrophic climate change.

After the passage of the Inflation Reduction Act, Sen. Manchin – who is responsible for almost single handedly gutting the Biden administration’s climate agenda over the past two years – admitted to reporters that the permitting bill was something Republicans have wanted to get done for years. Until last week, Democrats were on track to deliver this long term goal that would have had devastating consequences.

How did this happen?

Republicans joined with progressive Democrats to defeat the bill in the unlikeliest of partnerships, albeit for completely different reasons. Progressive Democrats opposed the bill for the damage the expedited fossil fuel projects would cause. Republicans opposed the bill in part to spite Manchin for advancing the Inflation Reduction Act, and in the hopes they can pass an even worse bill should the midterm elections go in their favor. 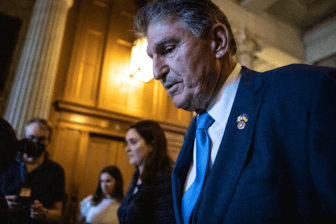 While Manchin will likely try again, the path forward for his permitting bill will be much more challenging (Photo Credit: Missouri Independent)

While this is a big win for meaningful climate action, the fight is not over. Sen. Manchin will likely attempt to attach the legislation to the must-pass National Defense Authorization Act (NDAA) at the end of the year, but will face a much steeper hill to climb as key committee chairs have expressed their hesitancy to add the permitting bill to the NDAA. With the White House also supporting the bad permitting deal, activists will once again need to make their voice heard.

A key talking point of some clean energy advocates and Democratic proponents of the bill is that permitting reform is also necessary to advance clean energy at the speed we need. While it is true there are obstacles to transmission lines being built that we must overcome, the greenlighting of more fossil fuel projects in the interim would do nothing to solve the climate crisis. 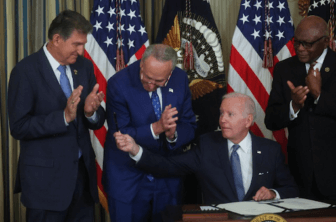 The White House has voiced support for the permitting bill, which would make progress on climate action challenging (Photo Credit: Reuters)

The political game is often one of compromises and in Washington D.C., where gridlock is king, it is often necessary to take two steps forward and one step back. The climate crisis, however, is not operating on Washington’s timeline. There simply is no more time to trade clean energy subsidies for expedited fossil fuel development.

Environmental justice advocates, including the Michigan League of Conservation Voters, have pointed to the need to pass legislation – like the Environmental Justice for All Act – that would give communities a chance to have input on energy infrastructure projects. When communities have real say in the projects built in their neighborhoods, it is unlikely dirty fossil fuels will win against clean, renewable, and reliable energy projects.

Currently, governments around the world – including the United States – plan to produce more than twice the amount of fossil fuels in 2030 than is consistent with keeping warming below the catastrophic threshold of 1.5 degrees Celsius. If this holds true, existing fossil fuel infrastructure is enough to send us hurtling towards climate catastrophe – new projects approved under Manchin’s deal would be nothing short of a death sentence.