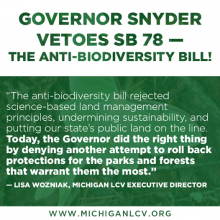 Michigan LCV called Governor Snyder’s decision to veto the anti-biodiversity bill today an important victory for Michigan’s natural resources. Michigan LCV scored the decision as positive on How Green is Your Governor? – Michigan LCV’s accountability tool for the Executive Branch.

The anti-biodiversity bill rejected science-based land management principles, undermining sustainability, and putting our state’s public land on the line. Today, the Governor did the right thing by denying another attempt to roll back protections for the parks and forests that warrant them the most. On behalf of the thousands of Michigan LCV members who sent letters to the Governor’s inbox and demanded this action, we thank him for showing leadership and stopping bad policy from becoming law.

In a formal letter sent today, Governor Snyder reaffirmed evidence that biodiversity is an essential component in the Department of Natural Resources’ land management process, citing continued growth in a forest products industry that relies heavily on the very kind of certifications this bill would have put in jeopardy, and the economic value of Michigan’s pristine natural areas.

Governor Snyder made it clear that this bill was bad business for Michigan, standing with loggers, farmers, hunters, fishers, tourists — anyone who enjoys or relies on our natural resources. His decision sends a strong message that efforts to deny science and devalue our state parks and forests should not stand in the Great Lakes State.

Michigan LCV scored Governor Snyder’s veto on How Green is Your Governor?, giving the Governor a positive score for his decision to stand with the forests, lakes, native plants and animals that make Michigan a world-renowned destination. How Green is Your Governor? is Michigan LCV’s running report card that reviews the decisions of the Governor, his administration and the statewide departments he directs.