Denise Thal: Lifelong advocate for women’s rights and the environment

In honor of Women’s History Month, this edition of stories from the Michigan LCV Family highlights Denise Thal, Michigan LCV Board Treasurer and Executive Vice President of Business Operations at Planned Parenthood of Michigan, who has embarked on a lifelong commitment to women’s rights and environmental protection.

Denise Thal has been standing up for the rights of girls and women her whole life. As a teenager and athlete growing up in 1970s Huntington Woods, Michigan, her high school didn’t have a girl’s tennis team. 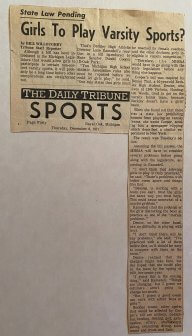 When her request to play on the boy’s team went unanswered by the school’s athletic director, she decided to take action — inspired by one of her heroes and a trailblazing woman of her time, tennis legend Billie Jean King.

Denise wrote a letter to her state senator, Dan Cooper, telling him of her situation and explaining the inequity of girls all over the state being denied the right to play sports simply because of their gender… even if they had no problem beating some of the boys, as was the case for Denise.

“It was so unfair,” said Denise, thinking back on her action. “I knew I could compete if given the chance and I didn’t want to take no for an answer.”

Inspired by Denise’s determination for equality, Senator Cooper soon after introduced a bill allowing girls to play on the boys’ team if a school in Michigan didn’t have a girls’ team. When the bill was signed into law later that year, girls all across the state could play sports previously not available to them — all because Denise picked up a pen one day and used her voice.

Denise credits many things in her life to strong women around her — including her love for the outdoors and environment. 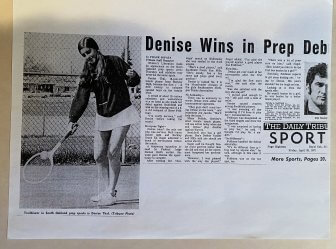 Her interest in camping, hiking, canoeing, and spending time in nature grew into a life-long passion during her summers at Tamarack Camps in the Upper Peninsula as a teenager. Camp director Vera Levenson — who, according to Denise, could “carry a canoe for 2 miles and cook literally anything outdoors” — cemented her love of the environment, and furthered her belief that women could do anything.

These early experiences planted a deep-seeded passion for women’s rights and opportunities as well as the importance of protecting our environment that would stick with Denise throughout her life. So much so, in fact, that after graduating from Harvard University and spending two years at Oxford as a member of the first-ever class of women to receive Rhodes Scholarships — one of just twenty-four women worldwide to receive this honor — Denise took a job at the Environmental Protection Agency during the Jimmy Carter administration. There, she worked on the “Bubble Project,” a cutting edge policy to create a market for carbon emissions trading (a kind of precursor to “cap and trade” policy) before leaving to complete her MBA at Yale.

Following an 18-year career as Vice President for Business Operations at The Henry Ford — where she helped oversee its transition from a regional American history museum to one of the preeminent cultural institutions in the world — Denise wanted to return her attention to her two biggest passions: women’s rights and the environment. At the urging of a friend, Denise met with Bob Martel, then-Board Chair at Michigan LCV and Board Member at Planned Parenthood of Michigan. Quickly realizing her intelligence and passion for both issues, Bob urged that she go where she could do the most good in both areas — filling a need for an experienced business mind on the Michigan LCV board, and injecting new staff leadership into Planned Parenthood of Michigan. Excited to be able to make a lasting impact on (often underserved) women and their reproductive health, and work to protect Michigan’s natural resources and the public health of its citizens, Denise jumped at both opportunities.

Denise has made and continues to make an indelible mark on both organizations and the issues about which she is most passionate. In describing why she is so invested in the work of Michigan LCV, she said,

“Because who we elect matters, and Michigan LCV understands that as much as any organization I have been a part of…”

A lesson that Denise has carried with her ever since Senator Cooper, at her urging, stood up for the rights of teenage girls who wanted to play sports.