This Wednesday, Michigan’s top House and Senate appropriators reached a budget deal with the Whitmer administration, paving the way for a full state budget to get voted out of both chambers sometime next week. The “skinny budget,” which will not include over $5 billion in American Rescue Plan funds or $1+ billion in extra revenues unanticipated earlier this year, will primarily cover day-to-day operations in state departments and agencies.

In a statement issued alongside the House Appropriations Chair, Rep. Thomas Albert (R-Lowell) and his Senate counterpart, Sen. Jim Stamas (R-Midland), the state’s Budget Director, Dave Massaron, lauded the plan as a significant investment in the state’s top priorities.

“I am very pleased that we now have a budget agreement, and I’d like to thank Sen. Stamas and Rep. Albert for the good working relationship that we forged during this process,” Massaron said. “This is a budget that is good for Michigan. It reflects shared priorities that will move Michigan forward as we continue to emerge from the pandemic as an even stronger state.”

While no details of the budget agreement have been announced, Michigan LCV continues to advocate for critical funding areas like the replacement of lead pipes, upgrades to the state’s outdated and crumbling wastewater infrastructure, a state facility green revolving fund and widespread home and business weatherization.

We will continue to update you on the budget process, and the appropriation of American Rescue Plan funds, as details arise.

MPSC Report Confirms: There is No Subsidy for Rooftop Solar Customers

Michigan’s major utilities have lost their main argument for removing the state’s arbitrary 1% cap on rooftop solar after the Michigan Public Service Commission (MPSC) presented their draft comprehensive study on distributed energy to the Senate Committee on Energy and Technology this Tuesday.

In an exchange between Senator Tom Barrett (R – Charlotte) and MPSC Chief Operating Officer Mike Byrne, it became quite clear that the answer to both questions was a resounding “no.” Not only did Byrne confirm that “there is no engineering reason for Michigan’s 1% cap on rooftop solar,” but he also confirmed Michigan’s current model for rooftop solar does not have any cross-subsidization. 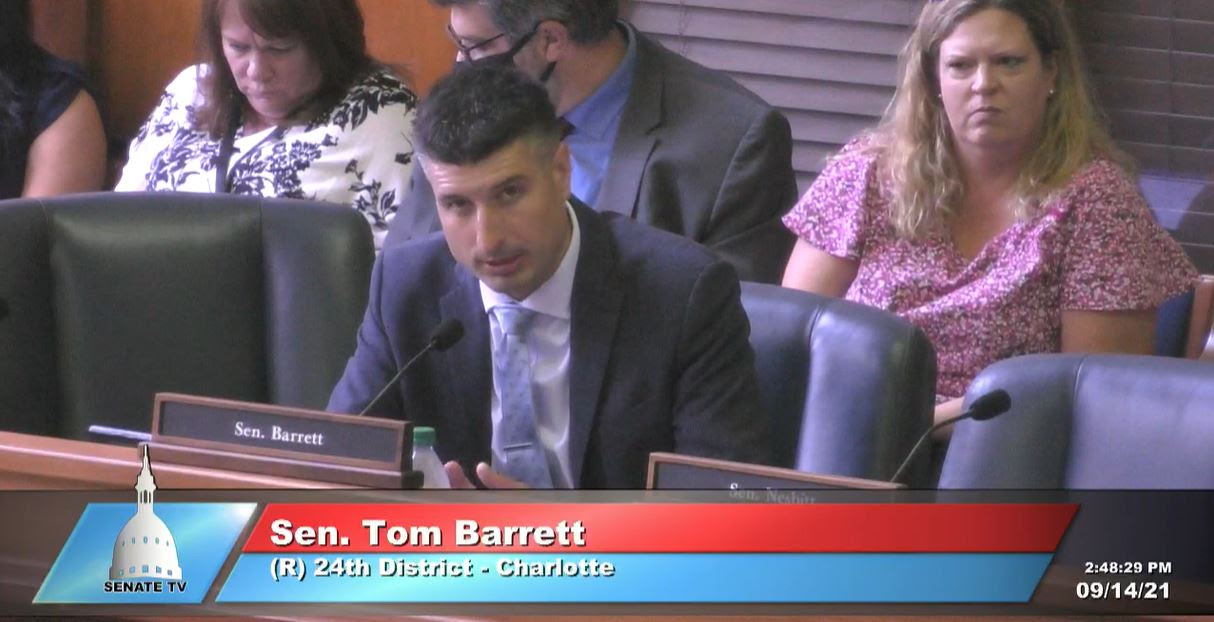 During Tuesday’s hearing, Sen. Tom Barrett asked: “Did this study definitively determine that the current inflow/outflow model does not have any cross-subsidization between ratepayers?” to which Byrne responded: “That is the conclusion that RAP drew, yes.” You can watch the hearing (especially from timestamp 47:26 – 47:49) here.

“The main argument standing in the way of affordable, reliable clean energy has once again been rejected by the Michigan Public Service Commission. Our major utilities must acknowledge they incorrectly claimed there was a subsidy, which they used as one of their many arguments for maintaining the failing status quo,” said Bob Allison, deputy director for the Michigan League of Conservation Voters in response to Tuesday’s hearing. “It’s now time for lawmakers to pass House Bill 4236, which would remove Michigan’s arbitrary 1% cap on rooftop solar, so Michigan residents can benefit from solar energy – lowering monthly energy costs, creating jobs, and increasing reliability in the process.”

You can read Michigan LCV’s full statement in response to Tuesday’s hearing here.

This Tuesday, the House Elections and Ethics Committee passed two dangerous bills that would expand the ability to intimidate poll workers and slow down the vote counting process on Election Day. The bills, HB 4876 and HB 4897, would require elections inspectors to file an affidavit declaring a partisan affiliation (eliminating non-partisan challengers as a result), and would permit an unlimited number of elections inspectors to be designated to an absentee voter counting board on Election Day.

The bills must be read as a direct GOP response to the situation at the TCF Center in Detroit in the wake of the 2020 election. At the TCF Center, third-party, independent poll challengers (including from Michigan LCV and the ACLU) played an integral role in keeping our elections secure as Republican poll challengers repeatedly and incorrectly attempted to challenge every ballot being counted.

Additionally, the limit on the number of poll challengers that could be present in an absentee voter counting board proved absolutely critical on the day after the 2020 election, when hundreds of GOP protestors stormed the TCF Center to “stop the count,” but could not enter the room where ballots were being tabulated. Had there been no limit on how many challengers could be in an absentee ballot counting board, the situation at the TCF Center would have played out in a radically different fashion, with potentially dangerous consequences.

Michigan LCV was proud to oppose these bills in committee on Tuesday, and will continue to fight tirelessly to protect our democracy. For more updates on MLCV’s activities to promote the vote and fight the GOP ballot drive to restrict our voting rights, check out MLCV’s new newsletter, The Democracy Drumbeat.