The Farm Bureau, cities, environmentalists, clean energy businesses, students, and small-scale solar producers teamed up to testify in support of community solar legislation during this Wednesday’s House Energy Hearing. HB 4715-4716, would allow Michiganders to subscribe to solar facilities that are owned and operated by a third party (private developers, non-profits, churches, neighborhoods, schools and community organizations would all be eligible), while receiving a proportional credit back on their energy bill. According to a July 2021 study released by the National Renewable Energy Laboratory, community solar could help participants save up to 25% on their energy bills. 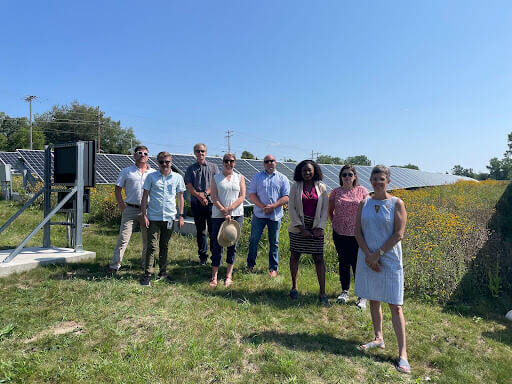 MLCV Government Affairs Director visited Michigan Energy Options East Lansing Community Solar MEO Facility this summer with House lawmakers and staff.  The pending legislation would make it much easier for independent parties to work with communities to build out facilities like this one located on an old community dump.

A community solar policy would not only help program participants; it will also improve grid reliability, lower energy transmission costs, and, according to an October 2021 report released by Michigan State University, create 18,500 jobs and support nearly $1.5 billion in economic growth in Michigan. The legislation is particularly important for Michiganders who pay the highest electricity costs in the Midwest for the second worst reliability, even on days where there are no severe storms.

“Michigan families need options for our energy, like locally-owned, neighborhood-based community solar.” said Nick Occhipinti, Government Affairs Director for the Michigan League of Conservation Voters in a press release. “Michigan can do much better; we have enormous potential to generate electricity from independent solar in communities across the state, which is why we are urging lawmakers to pass these common-sense bills.”

Michigan LCV needs your help to make sure that our state is able to reap the benefits of widespread, affordable, clean energy. We’ve set up this action alert to get you started: Tell Your Lawmaker to Support Community Solar.

At a roundtable discussion held this Wednesday with residents from Oscoda, Governor Whitmer signed an executive directive ordering the state agencies to purchase products which do not contain PFAS wherever possible. This directive is the first of its kind in any state and is being celebrated by advocates who see this as an important first step towards ultimately eliminating PFAS from all consumer products sold statewide.

“This is a ground-breaking and important action by Governor Whitmer on behalf of the people of Michigan,” said Tony Spaniola, Co-Chair of the Great Lakes PFAS Action Network. “The Governor’s Executive Directive makes clear that forever chemicals have no place in our bodies or our environment.  We urge businesses across Michigan to follow Governor Whitmer’s lead and remove PFAS from the products they sell, not just to state agencies, but to all Michiganders. And we call on the legislature to take immediate action to more broadly limit the sale of products containing PFAS.”

Overall, the State of Michigan has $2.5 billion worth of purchasing power annually, and the announcement directs the Department of Technology, Management, and Budget (DTMB) to purchase PFAS-free products whenever possible. At the event, Gov. Whitmer noted that, while an important first step, she hopes this will help spur on further actions including legislation.

Two such bills which address PFAS contamination were recently introduced by Sen. Winnie Brinks (D-Grand Rapids). The bills, SB 676 and SB 677, aim to hold corporate polluters accountable and, if passed, would allow victims of PFAS contamination to seek damages for their negative health impacts.

On Tuesday, the Senate Environmental Quality Committee heard testimony on a pair of bills, SB 184-185, which would require each K-12 school and child care facility to develop a plan to provide clean, lead-free water to their students and mandate the installation of NSF certified water filters at every drinking station. The pieces of legislation, which were sponsored by Sens. Curtis Vanderwall (R – Ludington) and Jim Ananich (D – Flint), have broad bipartisan support.

Installing filters at each drinking water fountain is a more effective and efficient way to protect children from lead exposure than the traditional, “test and chase” method. With the “test and chase” method, drinking water fountains are tested infrequently, allowing children to consume potentially harmful water for months at a time before a problem is found; and even then, it takes more resources to replace lead-containing fixtures and ensure safe drinking water. Installing and maintaining filters, on the other hand, guarantees that children are always drinking safe water and will help the state save $300 million over the next 10 years. 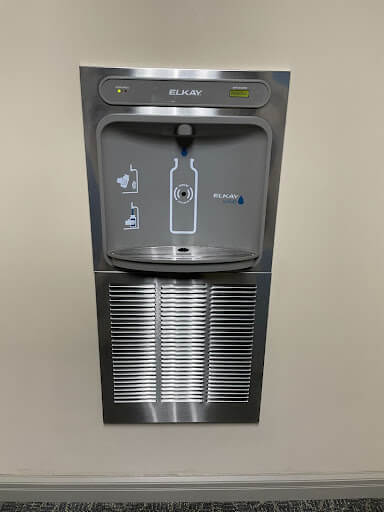 While lead contamination in drinking water is known to cause a variety of negative health effects, the impacts are particularly pronounced in children, as they absorb 4-5 times as much lead as adults, and are more at risk for developing severe health complications due to lead exposure. Lead exposure in children has also been linked to stunted cognitive development.

The bills, which were introduced last February, have taken on a heightened significance in light of the state’s inquiry into the lead contamination in Benton Harbor. Across the state, the prevalence of lead in the water has been a major concern for lawmakers; last week, the Senate considered a $2.5 billion water infrastructure bill, which, among other things, aims to replace all lead service lines in the state.