MLCV In Action: Healing Our Waters

This week, Michigan LCV state government affairs director Nick Occhipinti and several members of the Michigan LCV team traveled to Milwaukee, WI to attend the 2022 Healing Our Waters Conference, a gathering of clean water warriors, environmental justice activists and community leaders centered around the protection and conservation of our water. 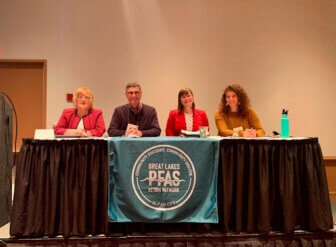 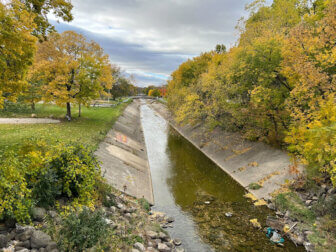 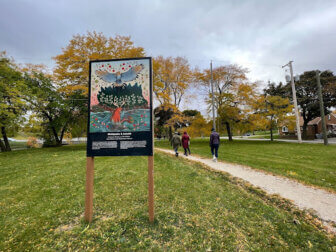 Homes have been removed from the Kinnickinnic River’s banks and access improved for the community.  This expensive, multi-year project will diminish the flood threat, restore the health of the river, and beautify the neighborhood. 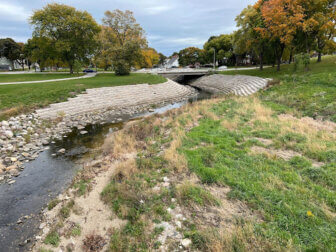 This stretch of the river that has already been improved – the wider bed and more natural channel will allow the stream to shift within its banks without causing significant local impact; the gentler river velocity will also decrease the drowning threat posed by the previous, flashy, concrete lined channel. 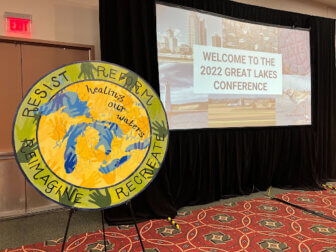 Tuesday marked the 50th anniversary of the passage of the Clean Water Act, one of the most important pieces of environmental protection legislation in American history. Not only has the Clean Water Act been instrumental to efforts to protect and preserve our nation’s waters and remediate water pollution, but it was leadership from late Michigan Congressman John Dingell that helped ensure the passage of the legislation in 1972. 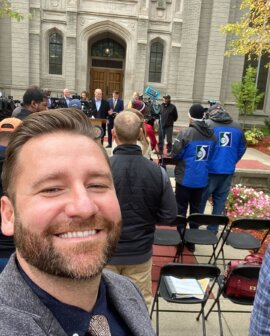 Because the protection and conservation of clean, safe accessible water is a core pillar of Michigan LCV’s work, the anniversary of the Clean Water Act was certainly cause for celebration. In addition to attending the Healing Our Waters Conference in Wisconsin, the Michigan LCV team was on the ground in Saginaw last week for a press conference announcing the allocation of $212 million in federal grants to improve the city’s water infrastructure. Congressman Dan Kildee, EPA Region 5 Administrator Debra Shore, EGLE Director Liesl Clark, and Biden Administration Infrastructure Coordinator Mitch Landrieu were in attendance, as well as partner groups including the People’s Water Board, Saginaw Community Alliance for the People, Sierra Club, and Michigan Environmental Council. 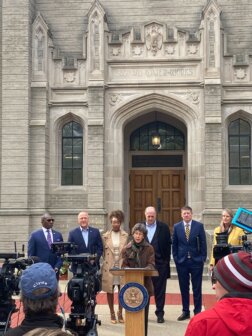 Made possible by the Infrastructure Investment and Jobs Act (IIJA) passed in 2021, the grants will, among other improvements, fund a new water tower in Saginaw. As more frequent extreme weather leads to more power outages, a water tower is critical to ensuring the resilience of water infrastructure, specifically when it comes to supplying drinking water. In the event of a power outage, backup generators must be started within five minutes to prevent a dangerous drop in water pressure. The new tower will add hours of insurance to protect adequate water pressure, in turn protecting the health of the community and ensuring access to drinking water.

In addition to the press conference, stakeholders – including Michigan LCV – and decision-makers participated in a small roundtable discussion about the grants. With a seat at the table, Michigan LCV was able to put voice to threats posed by toxic PFAS contamination, urging decision-makers to take action to hold polluters accountable for contamination and remediation. 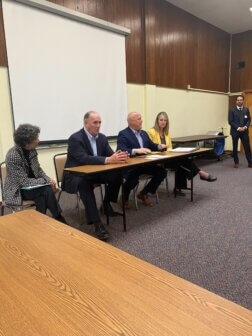 Participants resoundingly agreed that IIJA investments, like these federal grants, are critical for Michigan communities that are in dire need of infrastructure improvements. In the face of climate change and amid threats to drinking water, frontline communities require direct investments to build resilience and tackle environmental inequities. As a shining example of the benefits of investing in our water, the conversation was a fantastic way to celebrate the Clean Water Act’s anniversary.

In this week’s blog celebrating the anniversary (also linked below), our federal government affairs team explores the history of the Clean Water Act, from the Rouge River fire that prompted action from leaders like Congressman Dingell, to the positive impacts the legislation has had on our water. The article also examines the U.S. Supreme Court case, Sackett v. EPA, that could effectively gut the Clean Water Act and strip the EPA of its authority to enforce it.

BLOG: Celebrating the 50th Anniversary of the Clean Water Act