On Wednesday, the House Energy Committee heard testimony from officials representing DTE, Consumers Energy, and the Indiana Michigan Power Company regarding their respective companies’ handling of service restoration following this past summer’s major power outages.  After several climate fueled severe weather events throughout the summer left more than 10% of Michigan residents without power, many households found themselves without essential services, often for a few days. The prolonged power outages occurred during the hottest months of the year – a time that is particularly dangerous for Michigan’s elderly and disabled populations.

These outages, and the ongoing lack of electric reliability in Michigan’s major utility service territory, have led to inquiries by the Michigan Public Service Commission – the state agency tasked with regulating utilities, Attorney General Dana Nessel, and now the House of Representatives.

As a state, we must put a heavier priority on examining our utility companies and how they adapt to the changing climate and needs of their millions of customers,” AG Nessel said in her statement announcing her office’s inquiry. “It remains unacceptable that Michigan residents have grown to expect power outages every time there’s severe weather in the forecast. We can-and must-do better. I appreciate the public’s help by providing my office with information on the hardships they faced during extended outages.”

As DTE and Consumers have raised electricity rates to the tune of $775 million with little improvements to service in the last five years, Michiganders experienced the most amount of minutes out-of-power on average annually when compared to the Great Lakes region. To make matters worse, Michigan utilities had the second-worst restoration time per outage in the nation – even on days without major storm events.

During the height of the COVID-19 pandemic, when thousands of Michiganders were out of work, DTE continued to shut off power to customers who couldn’t afford to pay their bills while simultaneously receiving hundreds of millions of assistance dollars through the taxpayer-funded CARES Act. Michiganders deserve better service for the costs they pay. MLCV is committed to holding the utilities providers accountable for their laggard investment in grid modernization and renewable energy infrastructure.

The Michigan Senate is considering SB 565, a transformational $2.5 billion water infrastructure proposal using money appropriated to Michigan under the American Rescue Plan – President Joe Biden’s signature COVID-19 relief bill signed into law this past March. The proposal is sponsored by 19 Senate GOP members, and has broad conceptual support across party lines and among stakeholders. This bill, if passed, would be a critical downpayment towards Michigan’s overall water infrastructure needs which were identified by Gov. Rick Snyder’s 21st Century Infrastructure Task Force.

After a summer characterized by widespread flooding (driven by climate change) that overwhelmed Michigan’s long-neglected water infrastructure, this spending proposal is timely and necessary. The bill also comes at a time when Benton Harbor, a majority-minority city with 45% of their population living below the poverty line, is grappling with lead levels in their drinking water exceeding that of Flint during their water crisis.

Among the key highlights in SB 565 are provisions to:

“It’s a bigger picture than just fixing things. We need to get what river systems, which watersheds, what areas we can address. This money won’t address all those problems, but it’s a good start,” Sen. Bumstead (R), the bill’s lead sponsor, said during committee testimony on the bill.

Water infrastructure is one of the major areas of bipartisan support in Michigan. Earlier this month, Gov. Whitmer released details on her own $500 million water infrastructure plan known as the MI Clean Water initiative which addresses many of the same priorities, including PFAS remediation. Michigan, notably, is the state with the most identified PFAS contamination sites in the nation. PFAS is a class of chemical compounds linked to a variety of health issues including cancer. Compounds in the PFAS family are colloquially referred to as “forever chemicals” due to their inability to break down over time in water systems and in humans after consumption.

In her statement on the plan, Gov. Whitmer stated: “Since the first day I took office, I have made an unwavering commitment to ensuring that Michiganders have access to clean and affordable water. The MI Clean Water Plan marks a significant step toward that goal. The MI Clean Water investment will help us rebuild Michigan’s water infrastructure and will prioritize and invest directly into protecting our public health, environment, and economy.”

We applaud the sponsors of SB 565 and Gov. Whitmer’s efforts to protect our state’s water resources and ensure that all Michiganders have access to safe drinking water regardless of economic status.

The House Natural Resources Committee heard testimony this last week from DNR senior advisor for wildlife and public lands Scott Whitcomb on the DNR’s 2021-2027 public lands strategy. The DNR was directed by the state legislature in 2018 to update the 2013 strategy through a new comprehensive plan that outlines the department’s goals for balancing stakeholder interests in the management of over four million acres of public lands.

The DNR’s collection of public lands comes from a variety of sources, ranging from small parcels the state came to own through tax reversion to large state forests used by the timber industry and outdoor enthusiasts alike, as well as game and wildlife areas that are vital to native species. To that effect, Whitcomb stated before the committee that the DNR developed the document with three key goals in mind: protect natural and cultural resources, provide access to outdoor public recreation opportunities, and perform responsible natural resource management.

These goals are important to the health and well-being of Michigan residents – the people who own these public lands – as well as to the quality of life in our state, and our heritage and identity as Michiganders,” said Whitcomb. “Accomplishing them will ensure that people of all abilities will have diverse and accessible opportunities to hunt, camp, fish, hike, ride trails, and connect with nature and history in ways that are unique to Michigan. It will mean high-quality, resilient natural resources that support fish and wildlife populations and sustainable resource-based industries like forest products and the capacity to explore and support renewable energies.”

Included in the plan are key considerations regarding climate resiliency and climate change mitigation. Forestlands play a vital role in carbon capture, a key goal shared by Governor Whitmer’s MI Healthy Climate plan to put the state on a path to carbon neutrality by 2050. We applaud DNR Director Dan Eichenger and Scott Whitcomb for their leadership in ensuring the continued protection of Michigan’s rich natural heritage and valuable natural resources.

On October 11th, the Michigan Independent Citizens Redistricting Commission (MICRC) voted on the proposed district maps, selecting ten draft maps that will be available to the public for input during the second round of public hearings between October 20 – 26th.

Beginning this week, Michigan LCV staff have been travelling across the state to deliver public comments before the ICRC on their proposed draft maps. In each of the meetings, held in Detroit, Grand Rapids and Lansing thus far, MLCV staff emphasized the need for state house, senate and congressional maps which promote partisan fairness and the preservation of communities of interest. 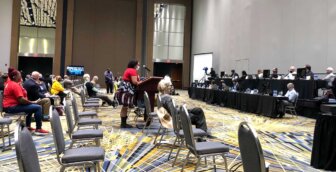 Democracy for All Coordinator Brooke Harris testifying before the Michigan Independent Citizens Redistricting Commission in Detroit.

The ICRC was established after the passage of Proposal 2 in 2018 when Michigan voters overwhelmingly decided to remove redistricting from the political process and create an independent body of citizens with the task of drawing new electoral maps. This is the first time in Michigan’s history that the once-in-a-decade redistricting process is not determined by the state legislature, but rather by a group of citizens comprised of four registered Democrats, Republicans and five Independents. 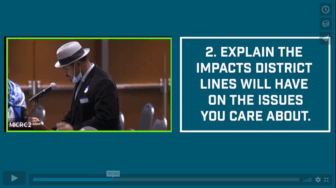 Check out a video on how to make a public comment before the Commission at upcoming hearings here.

In the interest of prioritizing partisan fairness and the Voting Rights Act, MLCV has recommended that the commission consider the suggestions made by Promote the Vote, an organization which seeks to eliminate partisan gerrymandering, uphold the provisions of the Voting Rights Act, and create competitive maps which reflect the nearly-evenly divided political landscape in the state.

“This commission must create maps that are fair and just from a partisan perspective,” said MLCV Government Affairs fellow Timothy Cohn before the ICRC during their meeting in Lansing this past Thursday. “This objective, more than any other, embodies the primary reason that this commission exists.  It is the primary reason you were created, and is, of course, enshrined in the Michigan Constitution and the mission of the Independent Citizens Redistricting Commission.”

We will continue to update you on the ICRC’s progress as they continue to solicit public comments ahead of their final recommendations.