Last Thursday, we announced the launch of a $3.5 million campaign through our Conservation Voters of Michigan (CVM) PAC to elect clean water, public health, and democracy champions this November. Centering around ads to re-elect Gov. Gretchen Whitmer, Attorney General Dana Nessel and Secretary of State Jocelyn Benson at the top of the ticket, the CVM PAC campaign also targets competitive state House, Senate, and Michigan Supreme Court candidate races, and is being deployed alongside national LCV’s congressional activities. Read our press release here. 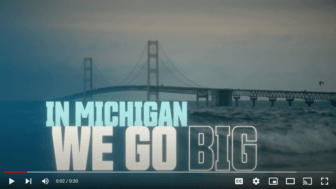 CVM is running one of Michigan’s largest state-based campaigns, using #OurWaterOurVote messaging, focused on clean water which is a top priority for voters in the Great Lakes state. 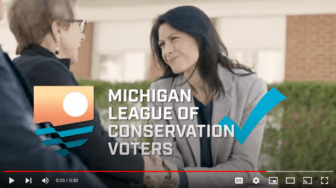 Statewide polling and research has consistently shown that Michigan voters from both parties want leaders who will prioritize protecting our water, moving rapidly to clean, renewable energy, and holding polluters accountable.  On November 8th we need to vote like our futures depend on it, because it does.” – Bob Allison, Michigan LCV deputy director

Last Thursday evening in Grand Rapids, Gov. Gretchen Whitmer and Republican nominee Tudor Dixon squared off in the first gubernatorial debate ahead of the November election, giving voters a chance to see how their platforms stack up against one another. Read the AP’s recap of the debate here.

The majority of the questions asked of the candidates focused on reproductive rights, gun control, schools, and the economy. Gov. Whitmer highlighted her accomplishments throughout her first term, including bi-partisan legislation that invests more $4.1 billion investment in infrastructure; more than $2.6 billion of which went to water infrastructure, state and local parks, and clean energy investments, and major economic development successes in luring advanced electric vehicle battery and storage manufacturing to Michigan, including recently announced battery manufacturing facilities in Big Rapids and Wayne County.

Last Wednesday, State Rep. David LaGrand and local leaders met with concerned residents and PFAS-impacted activists in Rockford, MI just north of Grand Rapids to tour a PFAS-contaminated site.  Rep. LaGrand heard about how the toxic “forever chemicals” have impacted the community, as well as what residents say should be done about it. 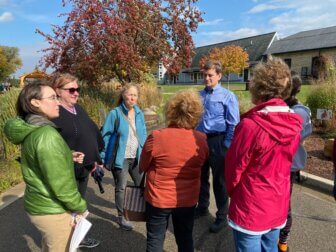 Among the members of the community in attendance was Sandy Wynn-Stelt, co-chair of the Great Lakes PFAS Action Network (GLPAN) and a Belmont resident who has dealt with the impacts of toxic PFAS chemicals contaminating her family’s drinking water since the dangers of the chemicals in the community came to light years ago. Tragically, it was only after Sandy’s husband died of cancer that alarm bells went off that their drinking water – supplied by private wells – was contaminated.

A class-action lawsuit filed in 2017 by Belmont residents against Wolverine and 3M was settled in 2020. The settlement required 3M to pay out $55 million to Kent County residents whose drinking water was contaminated with PFAS. The settlement covered property damages, but did not include personal injury claims as a result of PFAS-exposure. Some residents have expressed that they want coverage for PFAS-blood monitoring and testing, as well as assurances that their drinking water will no longer be contaminated. 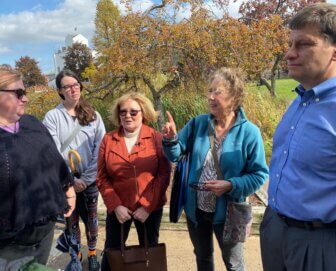 More remains to be done to hold polluters accountable around the state, and in a bizarre development in Rockford MI case it was reported last week that Wolverine Worldwide’s recently-retired CEO Blake Krueger is set to be honored later this month as a “role model” for young people in the business community, and will be inducted into the Junior Achievement West Michigan Business Hall of Fame.

Krueger oversaw Wolverine’s operations in West Michigan and was at the helm while Wolverine fought tooth and nail to avoid taking responsibility for contaminated drinking water and the impacts felt by the community.

As the fight to address the toxic PFAS crisis continues, the Great Lakes PFAS Action Network (GLPAN) is working diligently to bring impacted individuals and communities together to raise awareness and catalyze action by all levels of government.

BLOG: As climate change threatens agriculture, the next Farm Bill could provide solutions

Canvass for Gov. Gretchen Whitmer and Promote the Vote 2022

Canvass for Rosemary Bayer and Matt Koleszar for State Representative