Last week, Gov. Gretchen Whitmer announced her appointment of State Representative Kyra Harris Bolden to the Michigan Supreme Court to fill the seat vacated by Justice Bridget Mary McCormick, who announced in September her plans to step down at the end of this year. 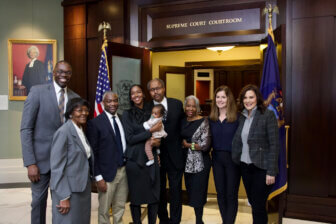 On November 22, Gov. Whitmer announced she would appoint Kyra Harris Bolden to the MI Supreme Court.

Rep. Bolden will be the first Black woman to serve on the Michigan Supreme Court, a milestone for progress in our state that will diversify the court’s perspectives and capacity as Michigan’s highest arbiter of justice.

The appointment comes after she narrowly lost her race for one of two open seats on the court to Republican incumbent Justice Brian Zahra. Michigan LCV endorsed Rep. Bolden in her candidacy for the court, and we are excited that Gov. Whitmer is appointing a qualified legal expert and experienced lawmaker. 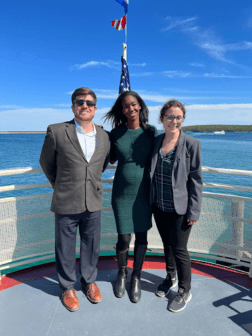 First elected to the Michigan Legislature in 2018, Rep. Bolden has stood up for the environment, democracy, and her constituents. In addition to her time in the legislature, she practiced law as a criminal defense attorney and as a staff attorney for judges in Wayne County.  When confirmed,

Bolden will serve a partial term through the end of 2024. She will have the option to run for re-election in 2024 as an incumbent justice.

Consumers Energy is weighing options for thirteen aging hydropower dams as their operating permits are set to expire beginning in 2034 through 2041.

The plan for the dams located along the Muskegon, Manistee, Grand, Kalamazoo and Au Sable rivers will be announced next year, sparking interest from residents who live alongside dam reservoirs.

Dam removal would cause their reservoirs to disperse and eventually disappear, which some locals fear would cause them to lose access to recreation and tourism opportunities. However, maintenance costs for the dams are estimated at over $165 million annually, to be paid for by Consumers Energy ratepayers. (Michigan LCV has steadfastly advocated against excessive energy rate hikes, as we did in August during the Michigan Public Service Commission DTE rate case.) This plan would require approval by the Michigan Public Service Commission. The MPSC will base their decision on the dams ability to generate enough electricity to justify the rate increases. Currently, these century-old dams produce 1.2% of Consumers total annual power generation.

The potential removal of these dams is a once-in-a-lifetime opportunity that would help restore the Au Sable to its natural state. Removing these dams would provide incredible angling and recreational opportunities.” – Joe Hemming, Anglers of the Au Sable president 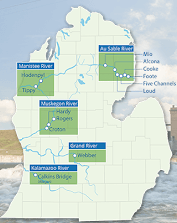 Overall, the environment would benefit from dam removal as the rivers would begin to renaturalize and Michigan’s fish would regain access to hundreds of miles of rivers and streams. The DNR currently spends $1 million each year to place salmon and trout into the Muskegon and Au Sable rivers.