In support of the ongoing efforts to decarbonize Michigan’s economy and elect conservation champions, Michigan LCV has partnered with the Michigan Chapter of the Sierra Club and Clean Water Action to institute our first-ever, statewide candidate climate pledge. The pledge commits incoming lawmakers to supporting policies key to the  implementation of the MI Healthy Climate Plan and serves as an important reminder for candidates that climate action is the number one issue for the state’s major environmental organizations. 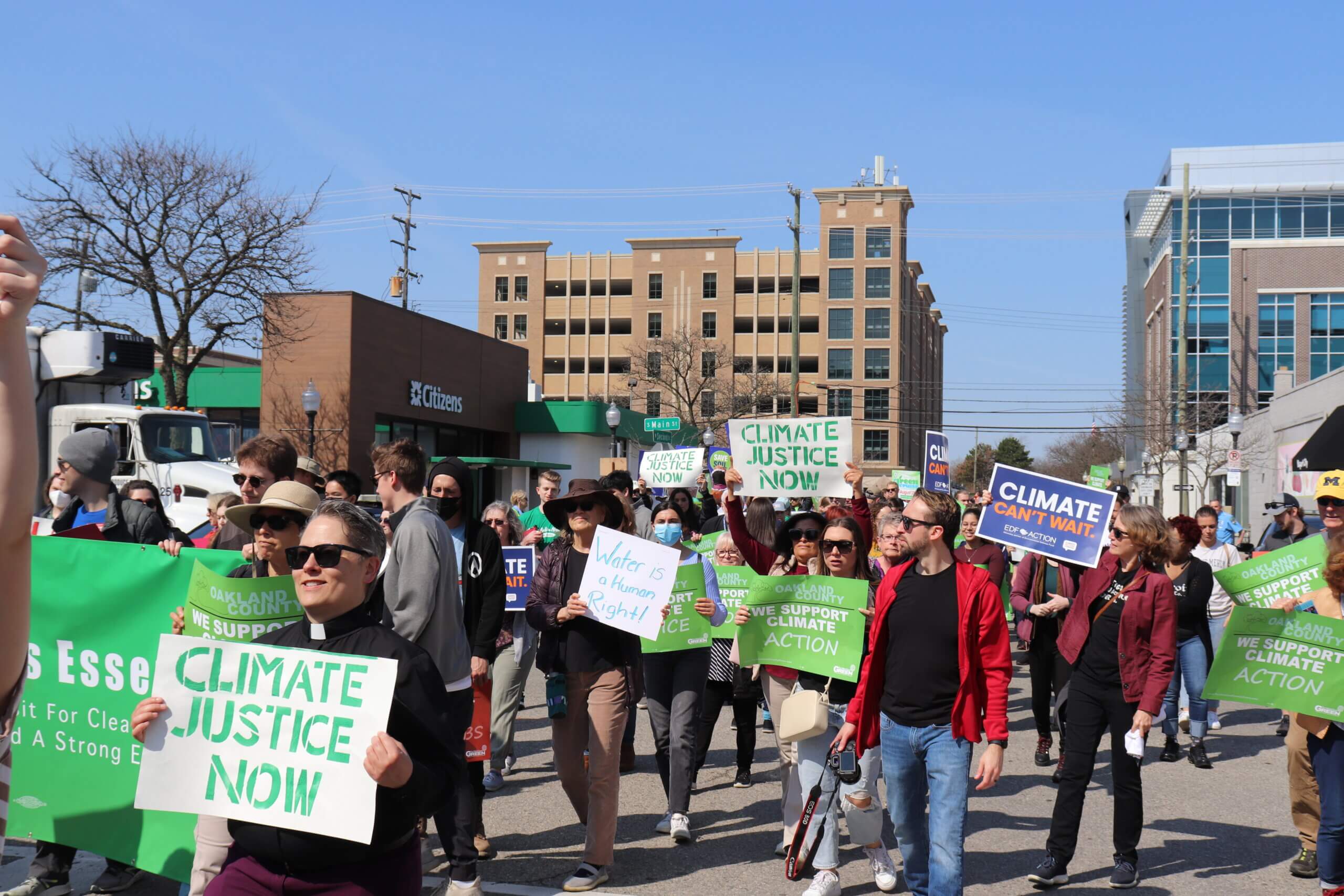 Michigan LCV and a broad swath of the environmental community is poised to focus on climate change as a top campaign issue; the effort will focus on candidates for office, voters, and all Michiganders in an effort to build the political and cultural will to move major climate policy in Michigan within the several years.

The people power that will make climate action possible in Michigan was on display last Saturday as Climate and youth activists from across Oakland County held the first-ever Oakland County Earth Day March and Rally last Saturday, April 23, in Royal Oak. The event was a perfect opportunity for environmental activists of all ages and backgrounds to celebrate Earth Week and unite in their efforts to call for bold climate action at all levels of government. Michigan LCV was proud to co-sponsor the event alongside Sierra Club, Clean Water Action, Sunrise Movement, NAACP, and other members of the Turn Oakland County Green Coalition.

To ensure strong turnout, Michigan LCV staff and board members placed over 7,500 calls to supporters ahead of the event. Additionally, Michigan LCV’s Southeast Regional Coordinator, Ethan Petzold, and Michigan LCV Ed Fund board member, Julia Cole, both spoke at the rally to highlight the need for action on climate change.

And, while some provisions of the plan can be implemented through executive action, much of the plan’s most consequential components require collaboration from the Legislature and private companies.

To join us in the movement for climate action, check out Michigan LCV’s activist toolkit where you can learn more about the MI Healthy Climate Plan and push lawmakers for its implementation!

Last week, AG Dana Nessel announced a major settlement with Consumers Energy to end coal use in Michigan by 2025, 15 years ahead of schedule. The proposed settlement, which is subject to final approval by the Michigan Public Service Commission, will provide significant cost savings for ratepayers and will result in Consumers becoming the first utility in the nation to close coal by 2025. You can read more here!

In their most recent rate case, DTE has yet again taken aim at rooftop solar producers by attempting to skirt the legislative process and halve the amount of money solar producers receive when they produce excess energy. A bipartisan group of lawmakers introduced a pair of House Resolutions that call on the Michigan Public Service Commission to reject DTE’s proposal. Both resolutions are expected to be introduced next week.

On Sunday, the Michigan Republican party nominated two Trump-endorsed candidates for Secretary of State and Attorney General. Kristina Karamo, a teacher from Oak Park and a proponent of overtly fraudulent election claims pertaining to the 2020 Presidential Election, emerged as the candidate for Secretary of State over sitting state representative Beau LaFave (R-Iron Mountain), who referred to his opponent throughout the race as “Q-Anon Karamo”. For Attorney General, Republicans chose Matt DePerno, a Kalamazoo based attorney who also peddles easily and often disproven lies about the last election cycle. These nominations only raise the stakes over voting rights and civil liberties surrounding November’s election. Read more about this here.

Gov. Whitmer Calls on Feds to Save Palisades Nuclear Plant

Amidst energy price spikes and a push towards carbon emissions reductions, Governor Whitmer is calling on the federal government to help fund and continue operation of the Palisades Nuclear Plant along the shores of Lake Michigan. The plant, which was scheduled to be decommissioned next month, has long faced financial challenges, local opposition, and a host of decommissioning concerns. Governor Whitmer has said that keeping the plant open will protect roughly 600 jobs, keep energy prices more stable, and will prevent the expansion of fossil fuel usage to meet the energy generation demand. Read more about this here.

Do you believe everyone should have safe drinking water and clean air to breathe? Are you interested in politics and environmental policy? Do you believe in defending our democracy?

If so, we have an opportunity for you to create change and protect Michigan’s land, air, water, public health and democracy at the Michigan League of Conservation Voters. Click here to see our current job openings, and watch the Capital Catch-Up in coming weeks to learn more about full and part-time positions with Michigan LCV’s Government Affairs Team!