Here’s some highlights from the $2.5 billion proposal:

“Clean water and protecting our environment aren’t partisan issues. This one-time federal funding will be a great asset as we work toward a cleaner, safer Michigan.” -Sen. Jon Bumstead

Wednesday morning, Republican Senator Ed McBroom’s Oversight Committee released the results of its extensive report on the 2020 election. Its resounding conclusion? “After hours of public testimony, the review of countless documents and presentations, and the review of the elections process itself, the committee found no evidence of widespread or systemic fraud.”

Hours later, House Republicans added a sweeping signature provision to the already unnecessary and redundant ID requirements proposed in Senate Bills 303 and 304. The amended version of SB 303 would be one of the most restrictive voter verification laws in the country – subjecting every in-person voter to a signature challenge and requiring poll workers (that typically work elections one or two days a year) to verify the signature on a voter’s application even if the voter has an ID. Additionally, the bills would remove the option to vote via affidavit if a voter does not have an ID, an option that Michiganders have utilized for years.

These bills would slow down the voting process, increase lines at polling locations, add confusion to the process for poll workers and voters, allow for the introduction of implicit (and explicit) bias into voter verification, and put ballot access in jeopardy for thousands of Michiganders.

“Since last November, we’ve seen an aggressive, coordinated smear campaign designed to instill mistrust in our elections and harm our democratic institutions, despite the most comprehensive audit in our state’s history proving the November 2020 election was free and fair,” said Rep. Koleszar, who serves as the Minority Vice Chair on the House Committee on Elections and Ethics. “I will continue to speak up to ensure facts are driving our decisions, not conspiracy theories.”

You can read Michigan LCV’s full statement on SB 303 and 304 here. We also encourage you to take action as these bills head back to the Senate. Click here to send a message to your state senator, urging them to protect your voting rights.

On Wednesday, Consumers Energy outlined their Integrated Resource Plan (IRP) – a critical plan that demonstrates how the company will source its energy over the next five years.

The major highlight? Consumers will shut down its remaining coal plants, including the J.H. Campbell plant located just north of Holland, a full 15 years earlier than expected. The downside? The company will replace much of that energy with natural gas, and the plan doesn’t go nearly far enough on energy efficiency and demand response – the cheapest and cleanest form of energy – so we still have a lot of work to do.  Regardless, this is a significant announcement.

“For far too long, Michigan has spent billions on imported coal that pollutes our air and water – Consumer Energy’s plan rightly acknowledges that with a welcome move to close major coal facilities by 2025,” said Nick Occhipinti, government affairs director for the Michigan League of Conservation Voters. “Wind and solar energy continue to be cheaper than fossil fuels and Michigan doesn’t need imported coal.”

You can read the full statement here.

In other clean energy news, two sets of bills moved out of the House Energy committee. The first bills out of committee, HBs 5011 and 5012, would expand Michigan’s existing Commercial Property Assessed Clean Energy (C-PACE) laws to multi-family residences and would also add climate resiliency and water infrastructure upgrades to the list of eligible projects for financing. Across the nation, C-PACE programs have successfully expanded access to energy efficiency improvements, climate resiliency projects, and water infrastructure upgrades. This legislation will help businesses save money and reduce their carbon footprint.

The second pair of bills out of committee, HBs 4801 and 4802, would establish a registration and licensing procedure for EV charging stations. The two bills are part of a broader package that includes HB 4803-4805, three bills to allow EV charging stations at state-owned rest stops. The other three bills in the package, however, did not see any action this week.

Our land, rivers, streams and lakes are part of our Michigan way of life; they are part of who we are, the foundation of our economy and our well-being. In that spirit Senator Wayne Schmidt (R-Traverse City) introduced Senate resolution 72 to protect 30% of Michigan’s land and 30% of Michigan’s water by 2030. Sen. Schmidt’s resolution, and its House companion introduced by Rep. Lighter (R – Springport), are aligned with the national 30×30 campaign to protect more of the United States’ natural lands from development and degradation.

The 30×30 resolution comes just a week after Governor Whitmer announced her historic, $250 million initiative to invest in our state park infrastructure, signaling a bi-partisan commitment to ensuring that Michigan’s natural lands remain vibrant for future generations. You can read our full statement about the bi-partisan Senate Resolution here and our full statement on Governor Whitmer’s announcement here.

This Tuesday, Michigan LCV participated in a joint press conference to celebrate the introduction of two bills that would increase representation from conservation and tribal organizations on two of Michigan’s wildlife boards. HB 5078 would add a seat for conservation specialists and a seat for tribal representatives to the board of the Michigan Wildlife Commission, which oversees policy recommendations to Gov. Whitmer on wildlife and conservation. HB 5079 would add similar seats to the board of the Wolf Management Advisory Council. 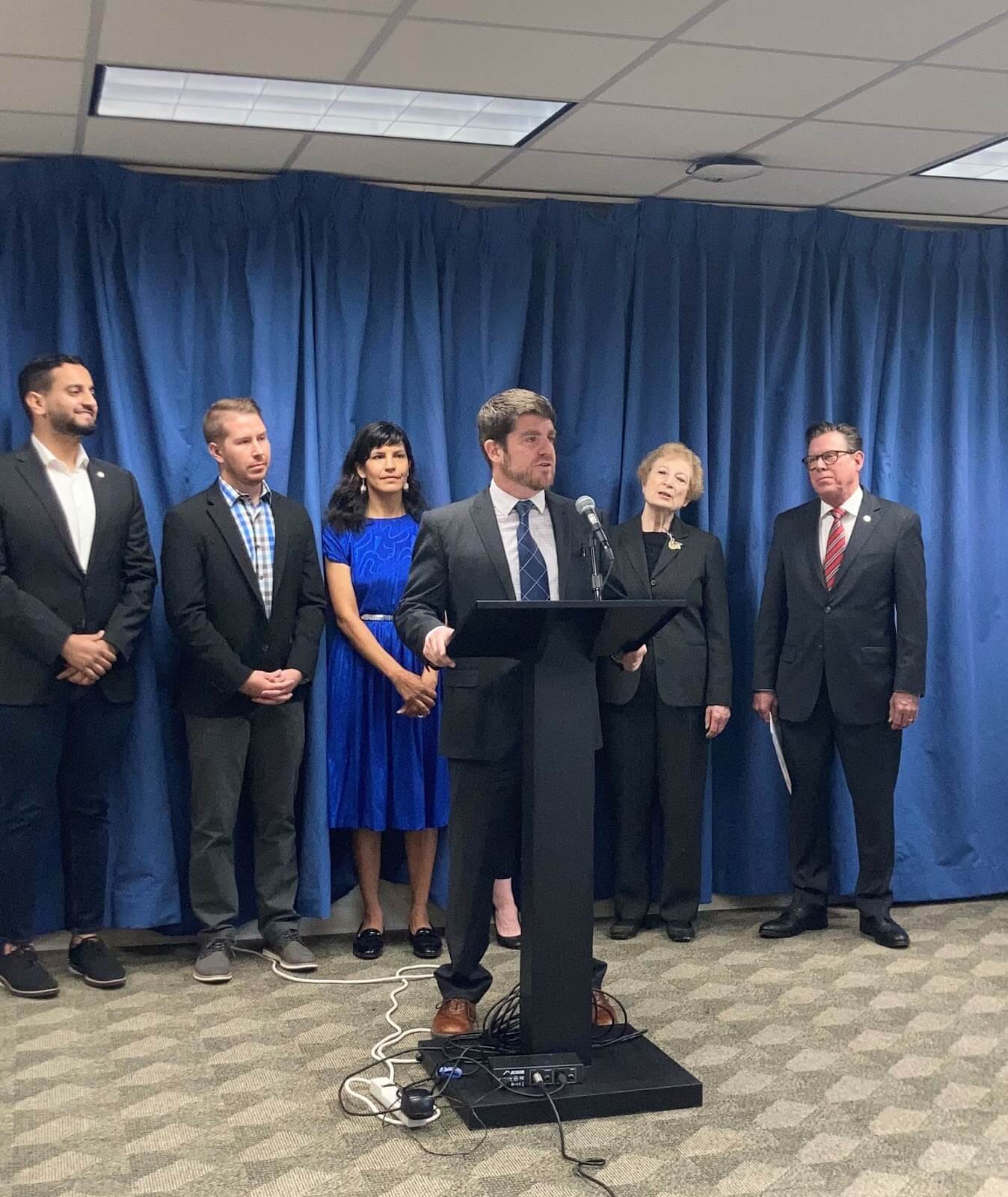 As Michigan, and the nation as a whole, transitions away from fossil fuel-burning transportation and towards electric vehicles, we will need to expand access to public charging infrastructure. HB 5095, introduced by Rep. Yousef Rabhi, would allow the installation, maintenance, and operation of charging stations at state parks and rides, making charging electric vehicles more convenient for thousands of Michiganders.