On Wednesday, the U.S. Senate voted to move ahead on infrastructure talks after a select, bipartisan group released the details of their much-anticipated bipartisan infrastructure deal. The deal is currently the only proposal with bipartisan support, with 67 senators agreeing to move forward on a final vote.

While Wednesday’s breakthrough was a key milestone in securing funding for infrastructure upgrades, many pro-climate advocates have expressed that the $550 billion proposal does not go far enough on climate resilience, clean energy, or water infrastructure in comparison to Senate Democrats’ comprehensive $3.5 trillion plan, which could get passed through budget reconciliation, and President Biden’s original $2.6 trillion plan.

“It’s never been more urgent or more important to act on climate at the scale that science and justice require,” said Tiernan Sittenfeld, senior vice president for governmental affairs at the National League of Conservation Voters. “While the bipartisan infrastructure package makes some necessary investments, it also has some concerning provisions we will work to improve as the process moves forward. Congress must move swiftly to deliver on President Biden’s full Build Back Better agenda, including the transformative investments in climate, jobs and justice.”

After clearing Wednesday’s first procedural hurdle, the bi-partisan infrastructure bill is expected to go to the Senate floor for a full debate, where it faces a potential GOP filibuster and several rounds of amendments.

Last Wednesday, officials from the Michigan Department of Environment, Great Lakes and Energy (EGLE) ordered Enbridge to remove a 7.5-ton anchor which the company left near Line 5 after it became detached during maintenance work. The anchor was located in between the dual pipelines which span the bottomlands of the Straits of Mackinac. According to Enbridge, the anchor was retrieved from the Straits last Sunday.

This is not the first time accidental anchor strikes have threatened the exposed and poorly maintained oil pipelines. In April 2018, an anchor from a shipping vessel struck and damaged Line 5, prompting the U.S. Coast Guard to issue a no-anchor zone in the pipeline’s vicinity. In May, Governor Whitmer ordered Enbridge to cease the flow of oil products through Line 5 citing “persistent and incurable” easement violations. Since then, Enbridge has continued to illegally operate the nearly 70 year old pipelines.

“Enbridge Energy continues to play Russian roulette with our Great Lakes, this time dropping a 15,000-pound anchor between the aging oil pipeline beneath the Straits of Mackinac,” said Bentley Johnson, MLCV’s Federal Government Affairs Director. “Time and again Enbridge has ignored the state’s oversight and thwarted accountability. We must shut down Line 5 before we have a catastrophe on our hands.”

MLCV stands with Gov. Whitmer’s efforts to shut down Line 5 and protect the Great Lakes. You can read our full press release on last Wednesday’s incident here.

This Monday, Governor Whitmer signed SB 27, a bill that includes $10 million in emergency flooding relief for homeowners and businesses in Southeastern Michigan. The assistance comes after extreme precipitation pummeled the region this June, leading to power outages at pump stations, sewer system overflows, and another round of record flooding across Wayne and Washtenaw counties.

June’s disaster is only the most recent example of a climate-fueled weather event overwhelming Michigan’s aging water infrastructure. Historic flooding has caused significant damage in the Detroit region as recently as 2014 and 2016; and, according to expert engineers and climate scientists, if we do not upgrade our infrastructure to account for climate change, it will continue to happen.

At Monday’s bill signing event in Ypsilanti, Gov. Whitmer acknowledged the role that climate change has played in the recent flooding. “We’ve seen this since I took office. Three weeks in, we had the polar vortex, last year we had the Midland flooding, and now, three major flooding events in southeast Michigan in the past few weeks. That is the reality of climate change, and it is impacting us right now,” she said. 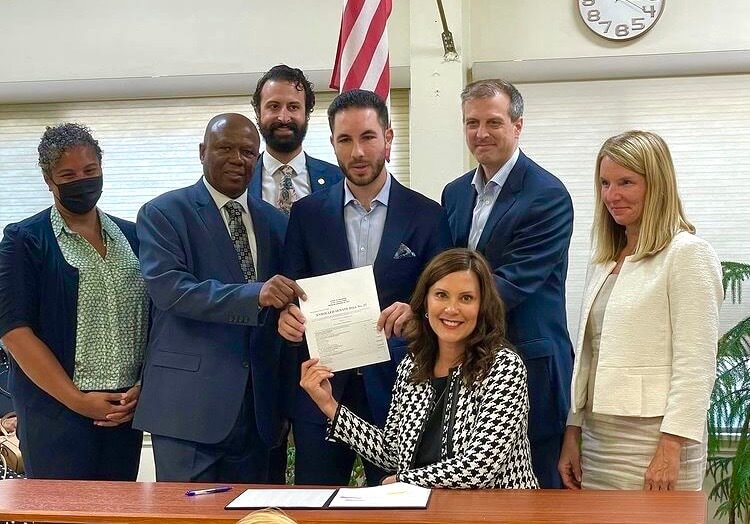 “As a former county commissioner, I know how important it is to work with our local communities to invest in our water infrastructure, especially in the face of climate change,” Rep. Felicia Brabec (D-Pittsfield Township) added. “These extreme weather events are increasingly becoming the norm, yet we are woefully behind in our upkeep and maintenance for our stormwater and wastewater systems. This pattern is not sustainable – we need to address our infrastructure deficits, invest in our communities, and prepare families for the effects of climate change.”

You can read Michigan LCV’s full statement on the bill signing here.