GOP Debate Features Candidates Unfit for Office of the Governor

With the August primary right around the corner, the seventh GOP gubernatorial primary debate was held last Wednesday, giving the five remaining candidates another chance to appeal to their Republican base. The next Republican primary debate will be held on July 27th.

Disappointingly, none of the candidates vying for the Republican nomination will publicly disavow Donald Trump’s Big Lie, the January 6th insurrection or the continued attempts to sow doubt about our election system. Even worse, several of the candidates have led on efforts to perpetuate and foment lies about the election process even though claims of widespread fraud have been repeatedly debunked.

Here are some items that stood out to us about each of the five GOP candidates: 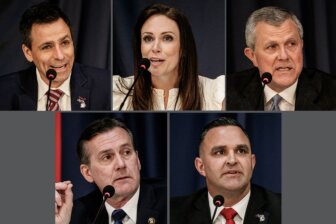 Throughout the campaign cycle, the remaining Republican candidates for Governor have touted too many untenable, extreme, or irresponsible policies and positions. All five candidates continued to make dangerous threats to our democracy by discussing the decertification of future elections; and, two of the front runners, Dixon and Rinke, have both suggested they would eliminate one of the state’s primary funding sources (the income tax) without replacement.

The Future of MI’s Environment with a 2022 GOP Candidate

The first question of last week’s debate was about clean, safe drinking water in Michigan, and  the issue was handled by the candidates with a modicum of sobriety. The candidates talked about the importance of addressing the threats of PFAS and lead contamination. That said,  several turned to criticism of Gov. Whitmer and the sitting legislature for not allocating surplus funding to address threats to drinking water, a claim that is particularly unfounded given the historic water investments by Whitmer and the legislature this year, achieving bipartisan support to pass  $4.8 billion in infrastructure investments outlined in Senate Bill 565, which allocates $2 billion to drinking water and water infrastructure.

Although it was a promising sign to have universal support for addressing Michigan water issues, none of the candidates mentioned climate change, and all support keeping oil and gas flowing through Line 5, the 69-year-old pipeline that crosses the Straits of Mackinac or the tunnel. In addition, each candidate has voiced support for continued investment in natural gas, and a few for further support of the uncompetitive and financially unviable nuclear power.

To learn more about the 2022 race for Governor, Attorney General, Secretary of State, and the State Legislature, stay tuned to our Capital Catch Up and the 2022 Endorsements page on our website!

At their upcoming July 25th meeting, the Midcontinent Independent System Operator (MISO) board, who is in charge of transmission operations in the middle of North America, is expected to approve several important power grid improvements that will increase access to renewable energy in Michigan. While more must quickly be done to improve the grid, MISO has taken a desperately needed step in the right direction by approving these measures. To read more about how you can help MISO change direction towards renewable energy, click here.