Just months ago, Grand Haven citizens gathered on the banks of the Grand River to watch the demolition of the J.B. Sims power plant, a coal-fired system that formerly operated as the city’s primary power source. Now, citizens, businesses, and community groups are gathering in opposition to a recent proposal for a new, gas-fired peaking power plant to be built where the J.B. Sims site on Harbor Island once stood.

The proposal, put forth by the city’s Board of Light and Power, has received pushback from a wide coalition of citizens and businesses for a variety of reasons. Businesses and fiscal conservatives have criticized the project for being economically wasteful. Peaking power plants are meant to be used infrequently, yet the project would cost Grand Haven ratepayers roughly $3,500 per person.

Environmental activists, on the other hand, have not only criticized the proposal for locking Grand Haven into fossil fuel use even as renewable energy becomes more affordable, but also for its potential impacts on Harbor Island’s ecology, which is already vulnerable thanks to legacy pollution on the island and rapidly fluctuating lake levels.

“We have built a fascinating coalition of people from across ages, backgrounds, and political ideologies who are looking at the Board’s proposal and are saying ‘let’s think about this again,’” said Field Reichardt, longtime Michigan Republican leader and Grand Haven resident. “We could do so much with the money it would cost to build a new plant. Why would we spend a whole lot of money on something we’ll barely use on an ecologically vulnerable island?”

Both meetings will be in advance of the August 16 City Council meeting when they are likely set to take a vote. Michigan LCV will continue tracking this issue and will provide more updates as the situation unfolds.

Last Tuesday, the Michigan Bureau of Construction Codes hosted a public meeting on whether it should adopt the 2021 International Residential Code (IRC) as the new base standard for the 2021 Michigan code update process. The 2021 IRC code contains improvements that would promote energy efficiency and affordability, easing energy burdens on consumers while reducing greenhouse gas emissions.

With buildings accounting for roughly 20% of carbon emissions statewide, updating our building code standards to be more energy efficient is critical for the state to meet its MI Healthy Climate Plan goals of reaching carbon neutrality by 2050. If adopted, the 2021 IRC codes would require new residential and commercial buildings to accommodate all-electric appliances, ensure compatibility with electric vehicle charging stations, and have energy storage readiness.

Michigan LCV submitted public comment this Tuesday in support of adopting the updated standards, which promote energy efficiency, improve health and safety standards, and help Michiganders save on their monthly bills. Stay tuned for more updates on the state’s building codes as we continue to track the 2021 code review process.

MLCV In Action: Coalition Educates Lawmakers on PFAS in Fertilizers

This week, Michigan LCV teamed up with the Ecology Center, Sierra Club, and Clean Water Action to host a series of educational meetings with lawmakers on Per- and polyfluoroalkyl substances (PFAS), their presence in fertilizers, and the threat the chemicals pose to our food system. The education series comes on the heels of a recent study, sponsored by the Sierra Club and the Ecology Center, that showed fertilizers often have high concentrations of PFAS yet remain commercially available for use on home gardens and agricultural fields.

PFAS, a class of over 5,000 different toxic chemicals found in everything from non-stick pans to firefighting foams, have caused a growing public health crisis in Michigan, which is the #1 state in the nation for identified contamination sites. As a result, our state government has taken swift action in adopting drinking water standards for seven of the most common PFAS chemicals. However, there is still action needed at the state and federal level to protect against PFAS contamination from other sources, including cosmetics, food packaging, home fertilizers, and other consumer products.

Michigan LCV would like to thank the following lawmakers for meeting with us on the presence of PFAS in fertilizers, and we look forward to continuing to work with them on this important issue! 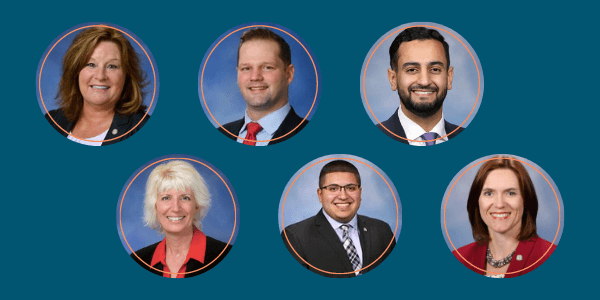