This week saw a flurry of bill introductions dealing in environmental issues, and the Governor endorsed our top solar bill early in this new session.

Did you know that Michigan is one of the few states that artificially blocks the expansion of rooftop solar?  Michigan currently has a cap on the amount of energy that can be generated from rooftop solar – less than 1%!  This artificial cap creates uncertainty for Michiganders who want to put solar on their homes and businesses. House Bill 4236 is a bi-partisan bill introduced by Rep. Gregory Markkanen (R-110) that eliminates the cap, allowing more consumers to install solar panels, increasing Michigan’s use of renewable energy, and creating clean energy jobs.  The bill was heard in House Energy last week and has earned support from the majority of Republican members on the committee; surprisingly, it has so far failed to do so with Democratic members.

The Governor lending her support to the legislation on Thursday aligns with Michigan Public Service Commission (MPSC) Chairman testimony conceptually in support of HB 4236.  Last week, Chairman Dan Scripps emphasized that there was no economic or engineering reason for the cap to exist.  What’s important to note is that if the distributed generation cap is not lifted, Gov. Whitmer’s MI Healthy Climate Plan and statewide goals of carbon neutrality will be more difficult to achieve.  We encourage you to send a message to your state representative urging them to support this important legislation. We have an active action alert set up with a pre-written message to get you started. As always, we encourage you to customize your message and share this action alert with others.

Filter First, another bi-partisan bill package was introduced this week by Senators Curtis Vanderwall (R – Ludington) and Jim Ananich (D – Flint) (SB 184-185). The bills would require schools and childcare centers to install filtration systems at all drinking water fountains, ensuring that children have access to contamination-free drinking water at a critical time in their physical and mental development.

Elections bills (4127-4129, 4132, 4134, 4135) passed out of the House Elections and Ethics committee. This bill package arose out of an auditor general’s report on Elections in Michigan and represents a mixed bag in its aims to clean Michigan’s voter roles and consolidate election precincts. Michigan LCV weighed in on bills 4127, 4128 (opposed), and 4134 (neutral). The bills would consolidate and enlarge certain election precincts, encourage the removal of electors listed on the qualified voter file for those who have not recently voted (2000) and with unknown dates of birth. While reasonable on their face, the bills as written would unduly burden legitimate voters in proving their date of birth and qualified voter status.

Michigan LCV testified before the House Natural Resources Committee introducing the organization to new members. Michigan LCV’s new Legislative Aide Hallie Fox lead the presentation in her first time testifying before the state legislature.  Congratulations Hallie! You can learn more about her here. 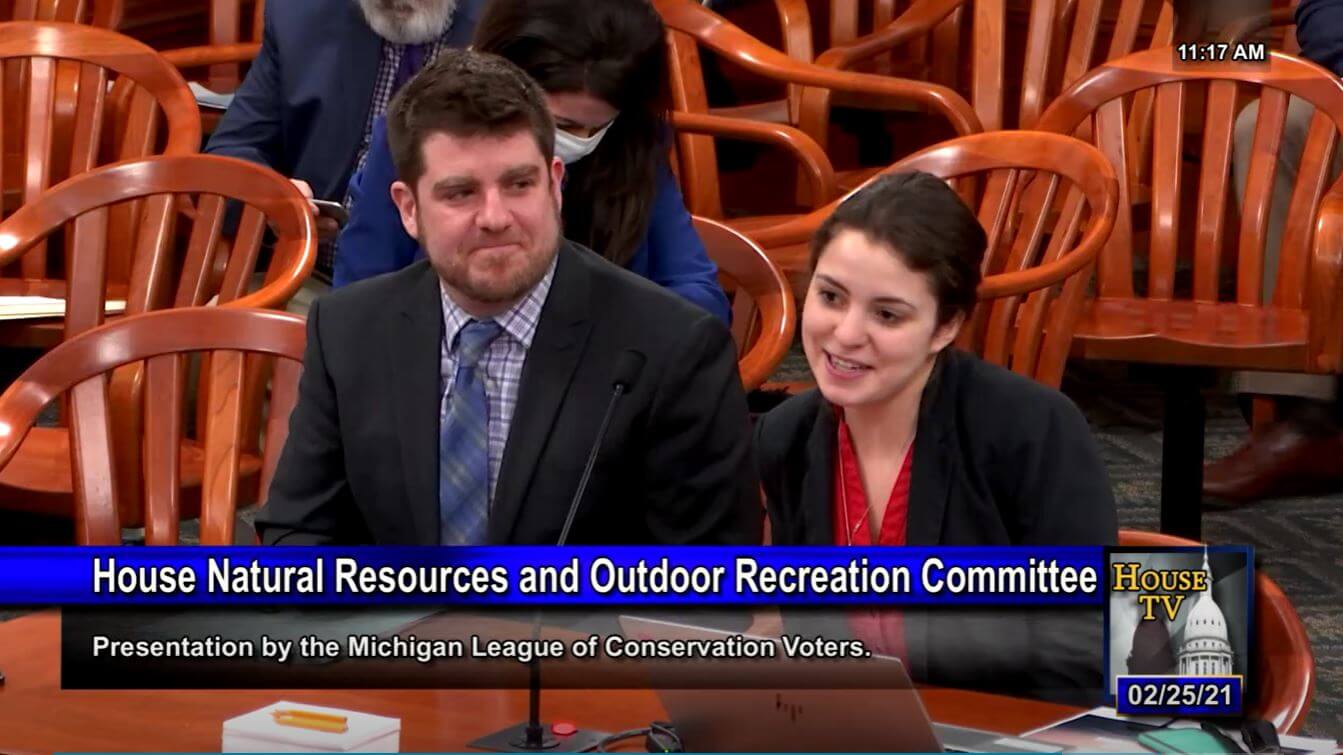