Two bad bottle bills that Michigan LCV has been tracking overwhelmingly passed the House on Tuesday and are now headed to the Senate Committee on Regulatory Reform. HB 4443 grants bottle distributors a half cent tax credit for every deposit beverage container they sell in Michigan – some 4 billion annually!  HB 4444 would allow the state to use its unclaimed bottle return deposits (escheats) (when those bottle deposits total $50 million or more) to refund the state’s general fund for those tax credits through 2022.

In short, the bills could permanently cost the state general fund over $20 million every year, and would take millions away from contaminated site clean up over the next three years.

Right now, 75% of all unreturned bottle deposits go to the Department of Environment, Great Lakes, and Energy (EGLE); the funding is critical to the program that currently only has the 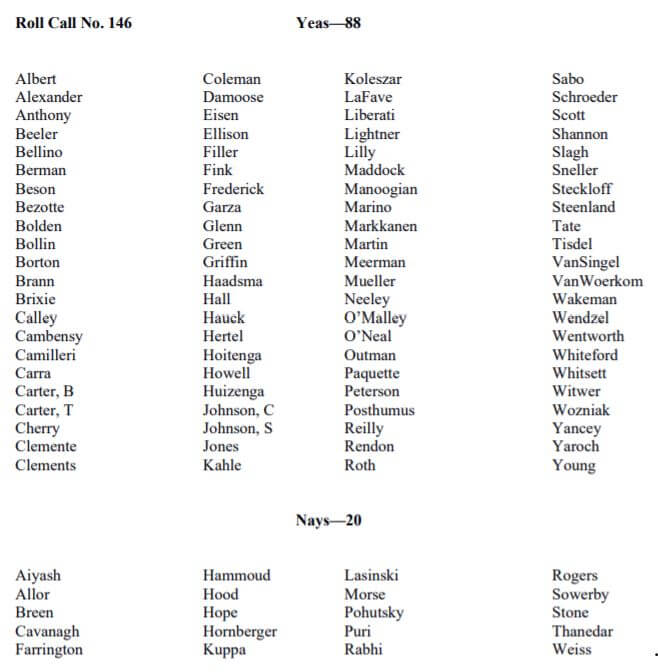 resources to clean up just a portion of Michigan’s 24,000 contaminated sites, which threaten our public health and drinking water. At a critical time for economic recovery and environmental protection, we should be focusing our efforts on chipping away at the backlog of contaminated sites to transform polluted landscapes and foster redevelopment.

Now that these bills have passed the House, Michigan LCV is focusing our efforts on the Senate. Tell your Senator to vote “no” on HB 4443 and HB 4444 with this action alert!

Is your house or apartment not great for rooftop solar? Maybe you have too much tree coverage, an old roof, you rent or it’s not allowed, or maybe you just can’t afford it?  If not, this bill is for you!

Michigan residents have some of the highest electricity costs in the Midwest. This legislation would help all participating consumers save money on their energy bills, expand access to renewable energy for low-income homeowners (and for those that can’t use rooftop), and allow consumers to re-invest in their local community’s economy. Furthermore, community solar installations would help the state reach Governor Whitmer’s MI Healthy Climate Plan goal of becoming 100% carbon neutral by 2050.

“It’s past due time for Michigan to make solar accessible to everyone in this state. These two bills are incredibly empowering, and if enacted, will generate a renaissance in clean energy for Michigan. There are so many people who don’t have traditional rooftops who can come together and collectively leverage solar power under this law, which really creates a dynamic opportunity for creative partnerships that accelerate solar installation and development.” 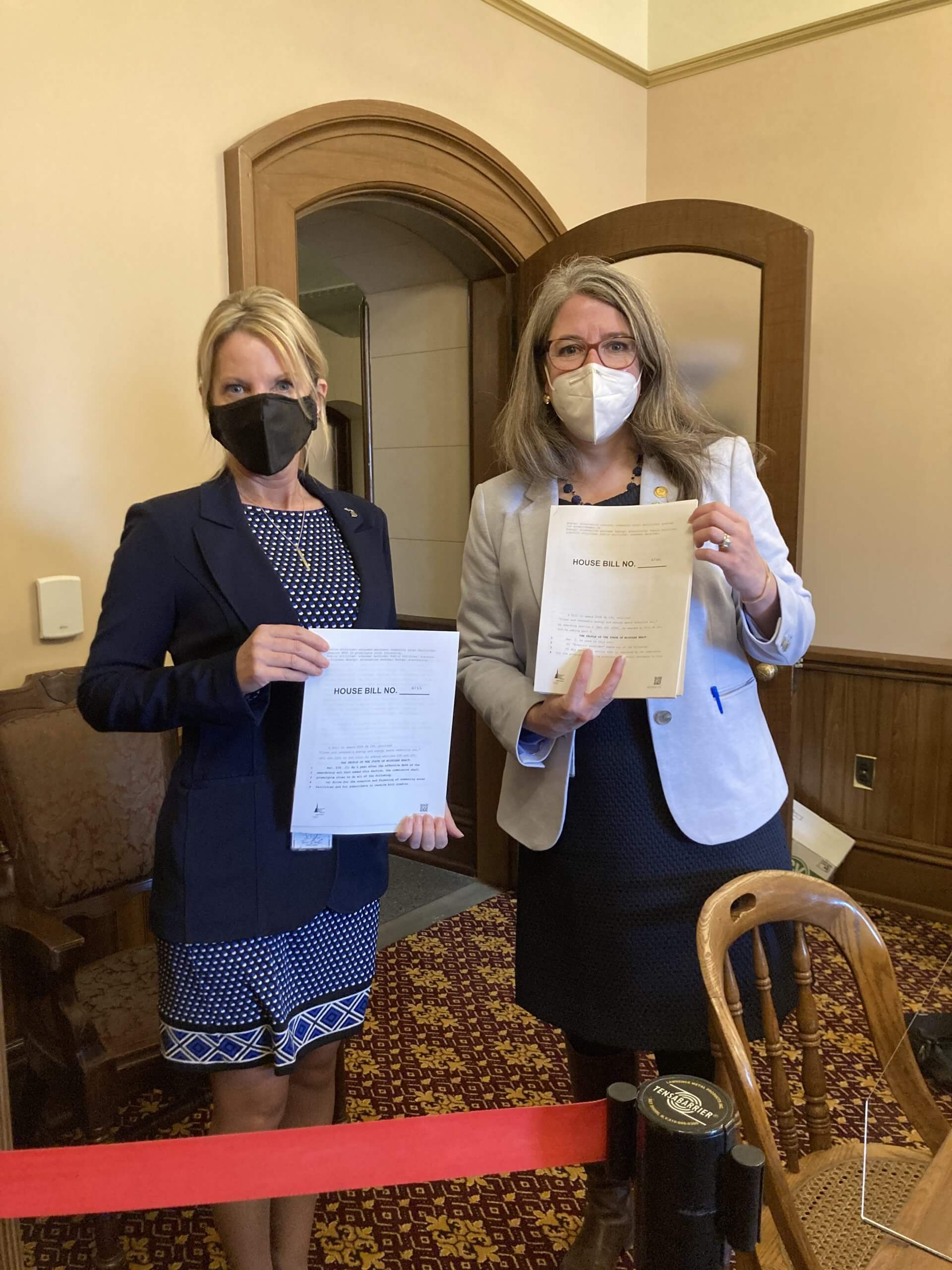 Rep. Hoitenga (left) and Rep. Hood (right) introduce their Community Solar Bills on Earth Day. The bills will help Michigan reach renewable energy goals while expanding solar generation access to low income communities. Picture credits go to our Legislative Aide, Hallie Fox, who was there to support Rep. Hoitenga and Rep. Hood when they introduced their bills, and Michigan LCV was proud to help gather the 28 co-sponsors of the bills.

Michigan Will Lose a Congressional Seat Based on 2020 Census Numbers

The US Census Bureau announced on Monday that Michigan would lose yet another Congressional seat based on 2020 Census numbers, bringing the state down to 13 seats for the first time since the 1920s. While the loss was anticipated due to lagging population growth in the Midwest, the news still highlighted the shared anxiety that lawmakers on both sides of the aisle feel in advance of the new redistricting maps, which the Independent Citizens Redistricting Commission are set to release this year. This is the first time in Michigan’s history that Congressional and State Legislature redistricting maps will be drawn by an Independent Citizens Commission instead of the Legislature.

Michigan LCV is hosting a webinar on May 6 at 6 p.m. to help Michiganders understand the 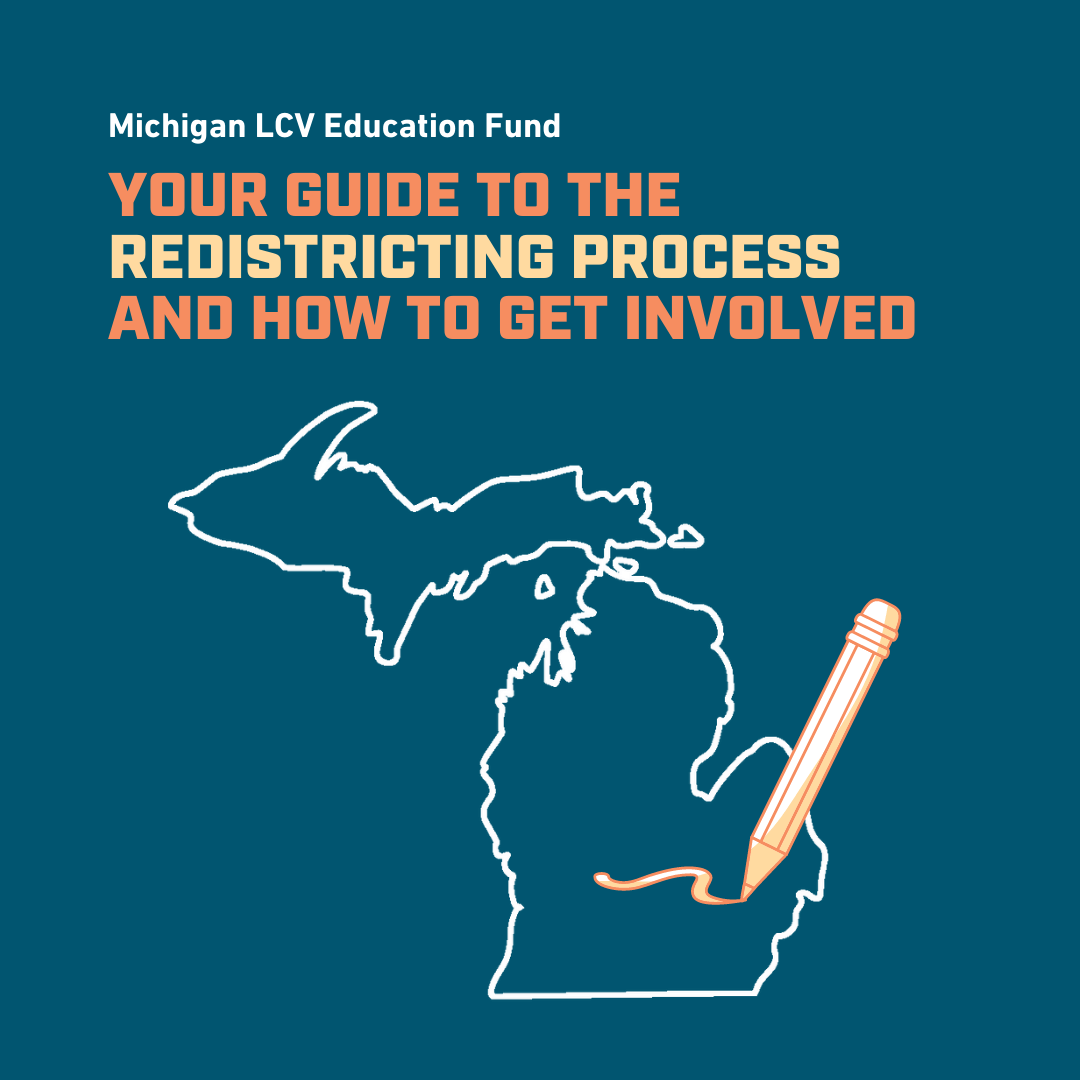 ins and outs of the redistricting process, who makes up the Commission, and how best to make your voice heard as we work to ensure accurate and representative legislative districts across our state. You can register to join us here!

President Biden gave his first speech to Congress on Wednesday night and used the opportunity to highlight a key element of his “Build Back Better” platform – The American Jobs Plan. The American Jobs plan is a historic investment in America’s energy and water infrastructure, and is centered around climate action, investments in low-income and communities of color, and job creation. This historic push for increased federal investment comes on the heels of the passage of the American Rescue Plan, a massive COVID relief bill that President Biden signed earlier this year, which allocated record funding to state and local governments for COVID relief and water infrastructure upgrades.

The massive influx of federal dollars will extend and complicate the state budget process – which is now well underway – but it presents a tremendous opportunity to advance MLCV priorities.

Just this week, the Senate passed a supplemental budget that would allocate both state general fund dollars and federal funds for a wide variety of priorities, and the House continued debates on their own supplemental appropriation.  One feature that was particularly concerning was a $250 million hand-out to Michigan’s shareholder owned utilities to expand natural gas infrastructure. This type of large-scale investment is needed to fight climate change – not make it worse!  A huge investment like this in energy efficiency, clean energy, battery storage, and electrification of homes in communities across Michigan would be a critical tool in fighting climate change, pollution, and putting Michiganders to work in good paying jobs. Instead, the legislature is proposing we invest in “adequate capacity for demand growth” of natural gas; this is exactly wrong. News of this boondoggle comes on the heels of major news outlets reporting that both DTE and Consumers Energy did not pay federal income taxes in 2020.  We hope lawmakers will quickly reject the idea.

Check your Legislator’s Work with the Digital Accountability Suite:

We’re keeping our eye on what goes on in Lansing so we can keep you informed. Track your lawmaker’s progress on environmental legislation by using our accountability suite. Learn who values and acts to protect our land, air and water in our state government; hold elected officials accountable for their actions; and track decisions and legislation that impacts our natural resources and communities.

Go to the digital accountability suite >>>