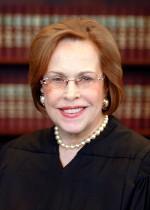 Justice Kelly attended law school at Wayne State University. Prior to that, she obtained an undergraduate degree from Eastern Michigan University and graduate degrees from Middlebury College and La Sorbonne – The University of Paris. Before attending law school, she taught French at Grosse Pointe Schools, Albion College, and Eastern Michigan University, and served on the Michigan State Board of Education. After law school, she opened the practice of Marilyn Kelly and Associates. She was elected to the Michigan Court of Appeals in 1988.

Citizens Lose Ability to Protect Environment by Challenging a Permit

Court Limits Ability of “Any Person” to Protect Michigan’s Environment

Environmental Contamination is a Factor in Eminent Domain Valuation

No Compensation for Victims of Toxic Dioxin Exposure