I’m seventy-one years old, and I have spent my entire life either very, very near to the Great Lakes or just a little bit away.”

The Great Lakes have never been far from Jim’s heart, either.

Where he grew up near Buffalo, NY it was a Lake Erie beach which he describes as a “childhood dream,” but for much of his life since then it has been a cottage on Saginaw Bay, of which he has many fond memories of time spent with his family.

“Everything we did, just about, had something to do with being in or on the water.”

He and his family fished, swam, water-skied, and ate that morning’s catch for dinner. 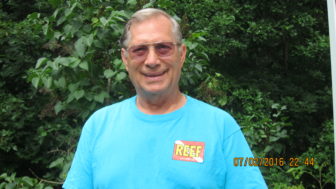 Now that his children have children of their own, their favorite thing to do is take their kids to the cottage so they can experience the same beauty and fun.

It’s not just that the fish are gone. There are visible, unpleasant changes in Saginaw Bay.

“I can’t describe how bad the shoreline was. It was just mucky. When the water levels went down a little bit and the water was shallow, in the sunlight, there were algae blooms like you wouldn’t believe.”

While the lakes were certainly comparatively pristine when Jim first knew them, he’s been concerned about the health of the Great Lakes for, he estimates, fifty years.

His worry over what was happening to the lakes he loved drove him to find out everything.

Jim, who also loves the ocean and is an avid scuba-diver, wearing a t-shirt from REEF, an organization that surveys oceanic fish populations he could.

He’s been aware of Michigan LCV “since before there was an internet” and reads many scientific publications.

Jim knows that there are still parts of the problem the scientists don’t completely understand, but he also knows there are some key causes they know for sure.

He knows that anything we put on Michigan’s land will eventually end up in its Great Lakes.

Industrial waste, fertilizer, and even something so simple that all of Michigan’s rural residents are familiar with: “There’s no sewer. So you’re forced to have a septic field. 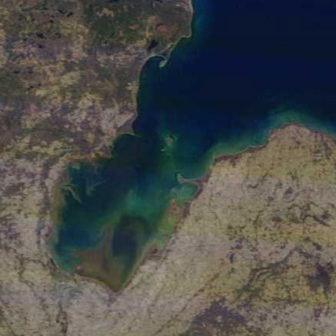 And our septic field is probably all of 300 feet from the lake. That whole shoreline is all septic fields.”

He knows overfishing and climate change could be part of the problem, too. But it doesn’t take science to understand a photograph.

If you take an aerial view of Saginaw Bay, where the Saginaw River goes in,” Jim says, “you can see this plume of filth going out into the Bay.”

“It’s a huge resource, and the commerce is a billion dollar deal. If we don’t take care of them, it’s gonna cost us.”

Jim has seen some cause for hope, in the considerable progress that has been made in cleaning up the lakes and in citizen efforts, but there is still much to be done.

“For a while there was a movement to do something about the septic fields, but that’s died out,” he says sadly.

But maybe more people will begin to take a stand as they realize what they’re losing.

Jim has noticed a big decline in the boats he sees on Saginaw Bay on the weekends. 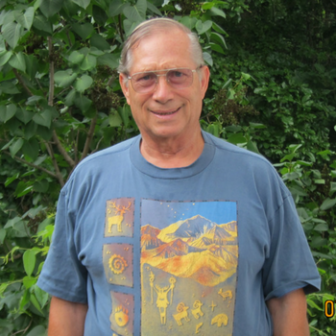 He thinks the fish population decline and the lowered water levels that can make it almost impossible to get a boat into the water are pretty likely causes.

Maybe for Jim, the most important part of all of this has always been the good times he’s had on the lakes with family and friends.

“Look at all that fun people are missing!” he says, laughing.

Michigan LCV is committed to connecting people like you and Jim with the information, tools, and resources you need to fight for the clean air, land and water that have made our state a great place to call home.

With more action alerts and ways to get involved than ever before., take this opportunity to sign up for Michigan LCV email updates so you can join Jim in the fight to protect our Great Lakes when it counts most >>