Build Back Better for Us: Austin Burt’s Story 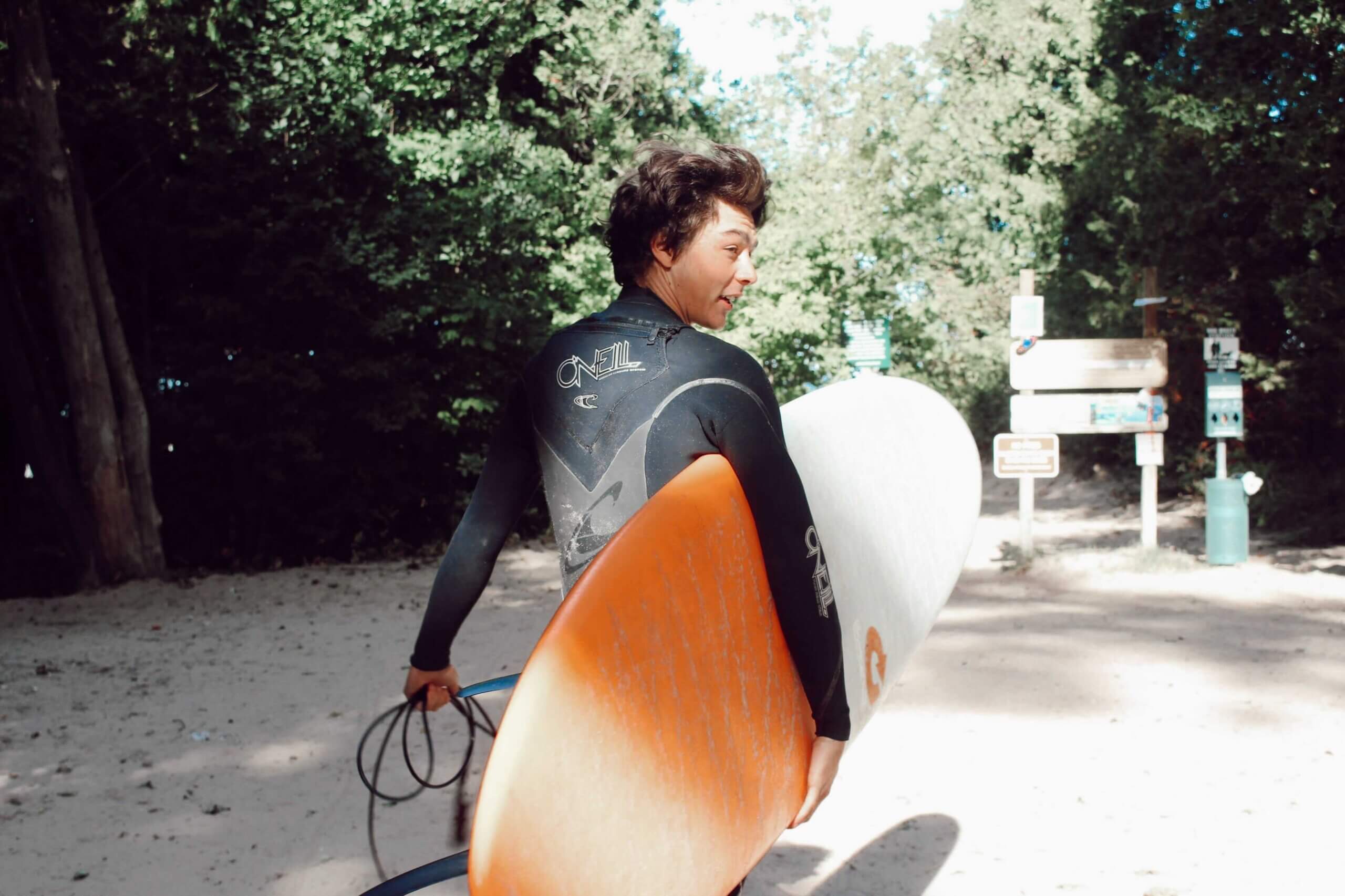 For Austin Burt, the “Lake Life” has always been his way of life. Growing up in Traverse City, MI, Austin developed a deep connection with the Great Lakes and everything the region has to offer in terms of outdoor activities. This connection is made especially unique by his love for surfing the Great Lakes and his involvement in the small, tight knit surfing community consisting of individuals that surf Lake Michigan in all weather and seasons.

Being born and raised in Northern Michigan, Austin has seen the changes that have taken place over the years and how the accelerating effects of climate change are impacting the land and water that he loves so much. As lake temperatures rise and weather patterns have become more inconsistent, it has gotten harder for Austin and fellow surfers to catch the waves in the same way they used to. He sees climate change as the culprit for these changes, and is passionate about taking action to protect the lake he calls “Big Mama Mich” and his beloved playgrounds.

Coupled with the changing climate, Austin is deeply concerned with increasing amounts of pollution in Lake Michigan, including debris, mercury, and micro plastics that have found their way into fish and animals. In the spring of 2021, Austin and a friend went fishing on Sleeping Bear Bay, an area that is known for its salmon and trout fishing. After catching an enormous, beautiful salmon in the bay, Austin says that when he and his friend filleted their catch that they found its intestines littered with all sorts of trash and plastic, making the fish inedible. 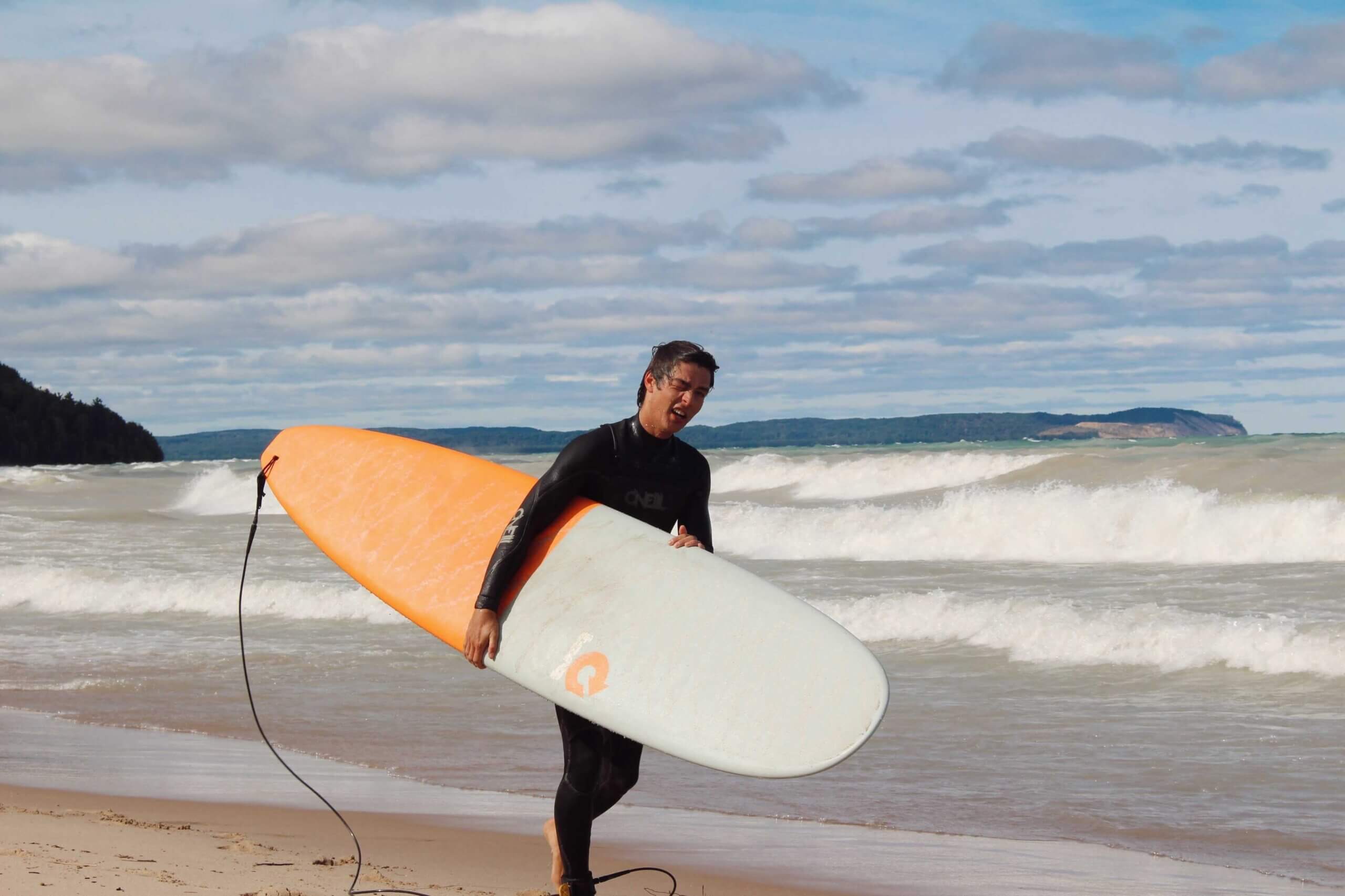 This is sadly now a common occurrence and Austin sees the threat pollution and climate change pose to the fishing and tourism industries that the region relies on for economic well-being. Consistently participating in beach cleanups that produce several contractor bags full of garbage on average, Austin is worried about what the future will hold for the region’s economy and how the region can maintain the delicate balance between supporting its economy and protecting the water and land that is truly a paradise.

For Austin, building back better and making investments in our infrastructure present a unique opportunity to protect the Leelanau Peninsula, “Big Mama Mich,” and the “Lake Life” lifestyle that is such a big part of his daily life, not to mention the precious waves that he chases in a wetsuit when lake temperatures dip towards freezing. He is calling on elected officials in Michigan and members of Congress to take advantage of this opportunity to protect Northern Michigan, the Great Lakes, and the region’s economy so it can remain the pure, beautiful oasis that it is today.

“Northern Michigan and the Leelanau Peninsula is one of the last bubbles of clean water and beautiful spaces. We have to keep it that way, man. Once it goes bad, it’s really hard to reverse those changes. We need to invest in our infrastructure and tackle climate change and pollution to make sure we protect the places we love. We have to be more environmentally conscious. I want to always be able to have this playground and continue doing the things that I love.”