Every two years, we release a How Green is Your Governor? Report Card.  Our most recent edition was the 2013-2014 Report Card, which tracked 67 actions across 7 issue areas from the second half of Governor Rick Snyder’s first term in office. Here is what we found: 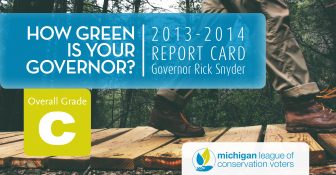 “Moving Michigan Forward” is a well-known slogan of Governor Snyder’s, meant to signal his drive for progress in Michigan. That has been achieved only in part when it comes to Michigan’s natural resources.

We know Governor Snyder is “one tough nerd” but when it comes to tackling important subjects, like Michigan’s natural resources, he has not been a consistent leader for protecting our environment. The governor’s final grade of “C” reflects a second two-year period full of mixed decisions — a few strong stands and some serious missteps with long-term consequences. To improve his grade in his second term, the Governor should apply himself better to protecting Michigan’s land, air and water.